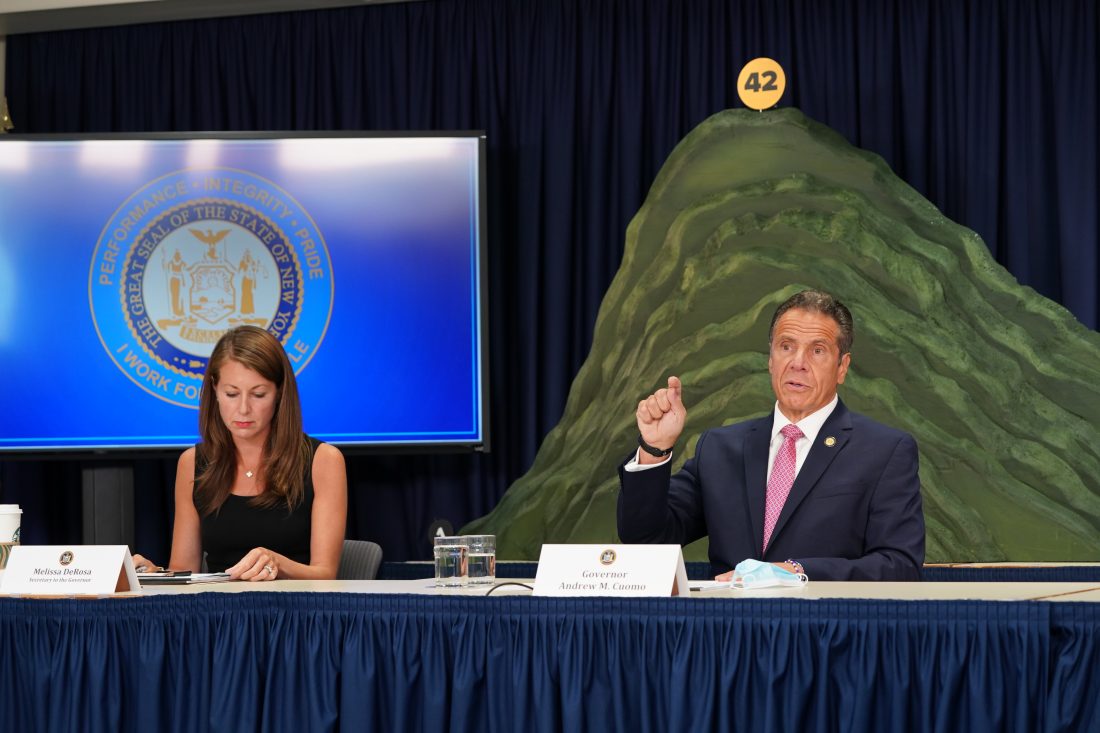 Gov. Andrew Cuomo uses a foam mountain prop to illustrate coronavirus numbers at a press briefing Monday. At left is Secretary to the Governor Melissa DeRosa. (Photo provided by the governor's office)

ALBANY — New York is urging travelers from eight additional states to self-quarantine for 14 days as it awaits a decision on the reopening of indoor dining in New York City.

Gov. Andrew Cuomo said in a Tuesday television interview that he plans to send state police and health and liquor officials to New York City Tuesday night ahead of his decision expected Wednesday.

The governor said he worries about lack of compliance with requirements to wear a mask and keep 6 feet away from others amid reports that dining in closed, indoor areas with air-conditioned systems could lead to spikes in COVID-19.

The Democratic governor’s concerns about indoor dining and lack of compliance with distancing and masks rules come as he raises repeated worries about travelers visiting New York from states where COVID-19 appears to be spreading.

Cuomo, along with his counterparts in New Jersey and Connecticut, announced a travel advisory last week that requires individuals from states with “increased prevalence of COVID-19” to quarantine for 14 days. Cuomo’s advisory applies to states with a positive test rate higher than 10 per 100,000 residents, or a test positivity rate higher than 10%.

Cuomo has warned that those out-of-state travelers could lead to a rise in infections in a state that’s seen a gradual decline in COVID-19 reported hospitalizations, fatalities and cases.

Nearly 900 people are hospitalized with COVID-19 in hospitals in New York, according to the state Department of Health, and 13 individuals who had tested positive for COVID-19 died Monday in hospitals or nursing homes.

Just 1% — or 524 — of 52,025 individuals tested for COVID-19 on Monday were positive, an amount that has shrunk even as the state has tested tens of thousands more people since the spring.

Individuals who violate a state or local quarantine or isolation order under the advisory can face a civil penalty of up to $10,000, according to Cuomo’s executive order.

Cuomo said he wants a “snapshot” of compliance with mask and distancing requirements in New York City, where he said he has chastised people not following the rules.

“And I say to people on the street, when I see they don’t have a mask or I see these groups of people in front of a bar: ‘What are you thinking? How short a memory. Learn the lesson. Give me a break,'” Cuomo said.