ON THE SCENE: Food justice is at a crossroads 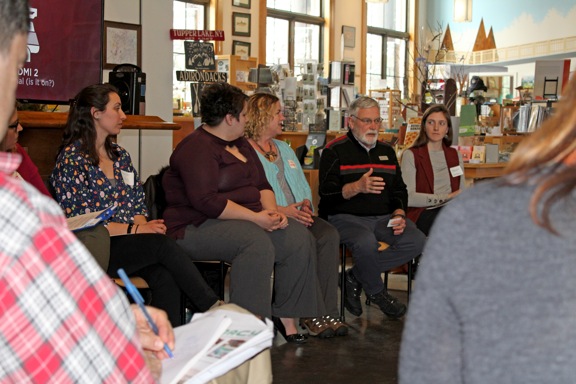 Ever step back and look at the cereal aisle in a grocery store? Take a look at all those items that are easiest to grab. The boxes are dazzling to the eye, multi-colored, and they tend to be filled with sugar.

Those closest to being nutritious are the hardest to reach, mostly located on the bottom or top shelves. Furthermore, those in the middle tend to be cheaper. That’s no accident. Ever look at a Cheerio or a Fruit Loop? Squeeze it, and what happens? It turns to powder. There is nothing in them that resembles an oat or a grain of wheat; that, too, is no accident.

Ever wonder who produces the pork you eat, be it as a pork chop, pork loin or a hot dog? Chances are it’s a Chinese company as they own two-fifths of the companies that supply the pork we eat. At the rate they are purchasing businesses, they may soon own a majority. Take a look at the peanut butter section. It looks like there is a lot of competition. Not true. Smucker’s, Jif and several others are manufactured by the same firm.

Imagine if there were labels on, say, bananas or any other fruit or vegetables that describe the chemicals used in the fertilizers or sprays to kill off the insects. On the organic label, there is this zero, and the others have a list a paragraph long. Which do you think you’d put in your food basket?

Participants in the third annual North Country Food Summit held Thursday, Feb. 27 at The Wild Center in Tupper Lake were not daunted by a wintery mix that, at times, resulted in whiteout conditions. They heard a riveting overview of the food system, which is more focused on fattening corporate wallets over providing nutritious food to Americans and others the world over. That presentation was followed by solution-based, mini forums that focused on changing that dynamic for North Country residents. 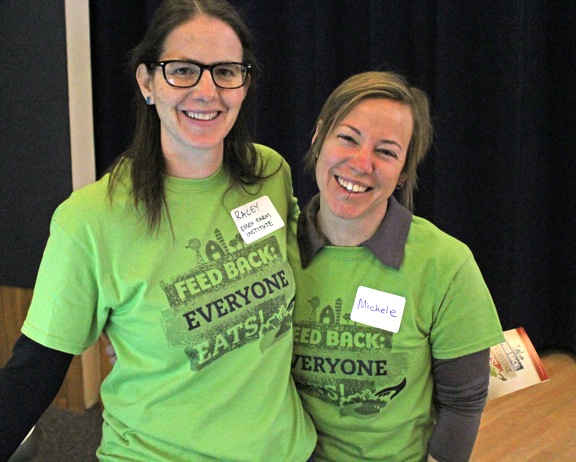 The summit was organized by Craigardan and the Essex Farm Institute, working in close cooperation with The Wild Center, Adirondack Council, AdkAction and the Hub in Tupper Lake. Other partners included for-profit and nonprofit organizations, farm owners and workers, community members and local business and public service providers. Their collective goal is to create a more equitable food system in the North Country.

A few years ago, Craigarden founder Michele Drozd and Essex Farm Institute Director Racey Henderson got together to brainstorm a potential collaborative project. They realized that farm systems and food justice were a concern of local organic farmers and other for-profit and nonprofit agencies that work to make quality food available to all residents and visitors of the region. They arranged a follow-up meeting that brought more than a dozen people together to develop a strategic plan. An outcome was to hold a food justice summit.

“The idea of the first summit held in 2018 was to take a broad overview of the North Country’s food system and to start thinking about how people can work together in new ways,” said Drozd. “At the second summit, Francis Westley did an awesome job zooming out and thinking big picture around whole systems and complex system design that kicked off several ideas around collaboration. Now that we’re in our third year, I’m starting to see actual results, actual partnerships formed, work being done throughout the year. People are going back to their businesses, farms and not-for-profits and implementing ideas that we’ve been discussing. This year, we decided to hone in on one aspect of food justice; poverty and food, a big issue that touches everyone.”

This year’s keynote speaker was Austin Frerick, deputy director of the Thurman Arnold Project at Yale University, an initiative established to generate and disseminate scholarship to impact competition enforcement and policy in the food system. The breakout sessions addressed such topics as the financial challenges of being a small farmer in the North Country, local food and food insecurity, and the role of food pantries. Other sessions addressed the injustices of food poverty, agriculture, the Green New Deal, initiatives to improve access to healthy food for those who need it most and Saranac Lake Central School’s effort to provide food security for its students and families.

“Our region has lost 10 grocery stores permanently in the last 12 years,” said Brittany Christenson, director of AdkAction. “There are many people living in poverty. Approximately 5% of the population has low food access and no access to transportation. We’ve got a big problem, and we need to fix it. We need to find new ways to distribute food so people have access to fresh good quality food. There are hundreds of Dollar Stores and convenient stores. We don’t want people to have them as their only options for feeding their families. We are up against a lot of barriers. It’s not just money and transportation; it’s culture as well.” 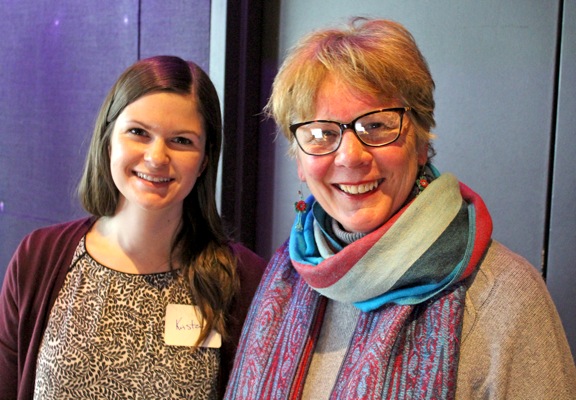 Frerick began by tracing the evolution of the food system in the 20th century, starting with its near collapse during the Great Depression. He discussed President Franklin D. Roosevelt’s successful effort to rebuild and strengthen it through implementing new guidelines that ended the Dust Bowl by instituting science-based protections for the land and curtailing overproduction as a means of price protection. As part of that, Roosevelt created structural fairness by putting up barriers between the different functions such as farming, processing, distribution and selling the produce. As an outcome, farmers made a living wage, as did others along the food system.

Since then, corporate leaders have fought to eliminate such barriers in the name of reducing costs. However, the actual outcome was the death of the individual farm, reduction of the variety of food stuffs produced on a farm from about a dozen to four or less, wages for farmers less than half what they used to make and vast profits for shareholders and corporate leaders. Plus, the U.S. obesity rate has increased five fold since 1960, a consequence of the increased use of sugar (corn fructose).

And distributors such as Walmart are now in the dairy business. The company’s new processing plant in Fort Wayne, Indiana, and more than 100 dairy producers from Indiana to Pennsylvania have lost their Walmart contracts. That was another financial hit to the middle class justified by “increasing supply chain efficiencies.” Frerick illustrated another efficiency: Pigs are bred to produce larger litters, more than the sow can nurse, resulting in the installation of nursing machines for excess piglets.

Solutions include an educated and motivated public willing to fight for food justice reform laws and finding ways of getting locally produced, high-quality food from places such as Essex Farms, Fledging Crow, Asgaard Farm, and Sugar House Creamery into the diet of all who live here through school breakfast, lunch and backpack programs. Other solutions include maximizing the use of state and federal programs like SNAP, strengthening CSAs and supporting initiatives like AdkAction’s farmacies and the Hub on the Hill’s efforts to expand local farmers’ bounties into value-added products as means of helping farmers earn a living wage and more people having access to their products year-round.

“One of my takeaways was the intersection between health, schools and environment, that all of these things are interconnected,” said Diane Fish, of Keene. “Another is that there are real possibilities to have the action happen locally, though we have to deal with the fact that the power is other places. I love the story that the rich and powerful feed the poor so they don’t chop their heads off. That illustrates that there is some power by those who need the most.” 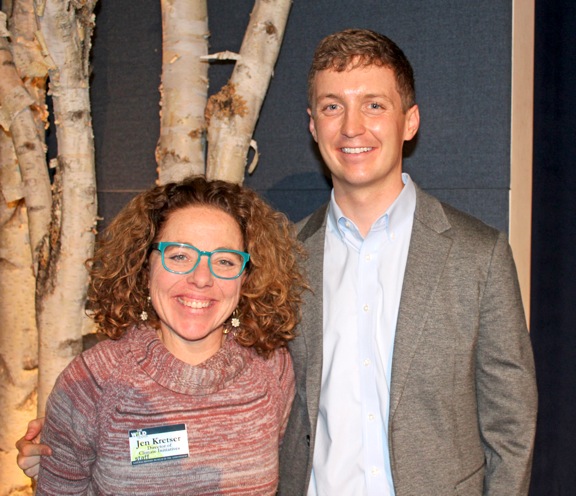 To learn what you can do and how you can participate, visit Craigarden’s website at http://www.craigardan.org/food-justice-working-group. 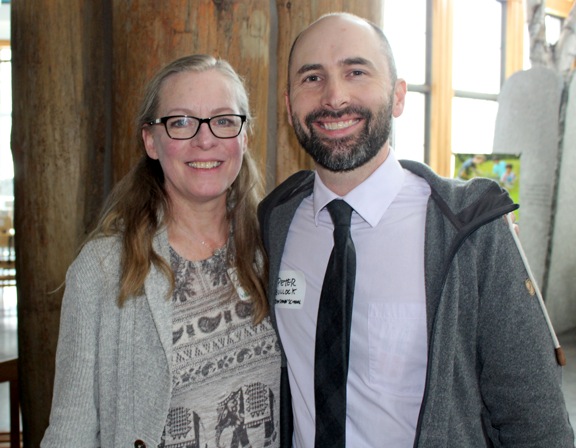