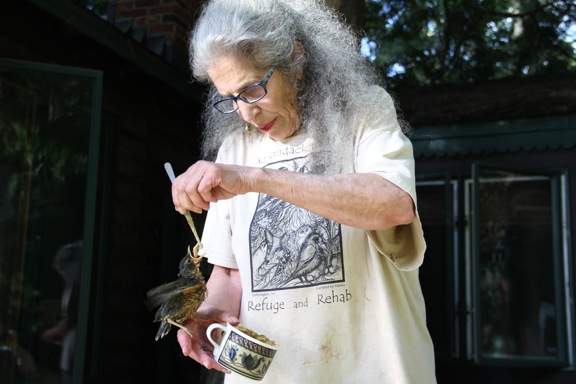 WILMINGTON — The owners of the Adirondack Wildlife Refuge, Wendy and Steve Hall, have been ordered to find new homes for around a dozen wild animals and end their education and rehabilitation efforts by Oct. 25.

The order, from the state Department of Environmental Conservation, comes after years of “noncompliance with prior state enforcement actions at the Adirondack Wildlife Refuge, as well as repeated and ongoing violations of state and federal laws, regulations, and license conditions,” according to the DEC.

“Past violations included using animals taken from the wild for private exhibition purposes, thus decreasing their potential for future rehabilitation and release, endangering the public by allowing the repeated escape of dangerous animals from this facility, irresponsible handling leading to public injury, intentionally hiding illegally held animals from state and federal agencies, and falsifying evidence in attempts to deceive or mislead state and federal regulators investigating reports of violations at the refuge,” said DEC Public Information Officer Lori Servino.

“As a result, Ms. Hall voluntarily surrendered her remaining licenses pursuant to a stipulation she executed with the DEC in July of 2021.”

Wendy’s state wildlife rehabilitation license was revoked in 2019. The DEC ordered her to release healthy native animals in her care to the wild, and to transfer animals in need of care to another licensed wildlife rehabilitator in the state. She was required to surrender animals at the refuge that are federally protected under the Migratory Bird Treaty Act. She was allowed to keep some animals held at the refuge under her DEC exhibition license until Wendy voluntarily surrendered her remaining licenses in July.

Steve, Wendy’s husband and refuge co-owner, said the DEC gave them 90 days to rehome all of their wild animals. At the end of those three months, any remaining wild animals would be euthanized, Steve said. That date is coming up on Oct. 25.

A stipulation agreement between the DEC and the refuge, however, says that the DEC will take any DEC-regulated wildlife left at the refuge after Oct. 25 and find an appropriate facility for them.

Fate of the animals

Right now, Steve said most of the animals have new homes lined up, and he and Wendy are in the process of rehoming them. But he said that moving them can be tricky, since some of the animals that have lived at the refuge for a while have gotten used to their environment and handlers.

Steve said he told the DEC that the animals could die in the rehoming process when he and Wendy were asked to relocate their Birds of Prey. Steve said half of those birds died as a result.

Mark Fraser, the co-founder of the Nature Walks Conservation Society based in Albany, said the society is doing all they can to perform an emergency rescue of the animals still left at the refuge. The conservation society is a nonprofit that helps fund the refuge with donations.

Fraser said he hopes that the society can find a way to restaff the refuge with licensed and trained workers while the Halls take a back seat — but the society is lacking in funds, and he fears the current and incoming staff at the refuge will be automatically assigned a “scarlet letter” because of the refuge’s past infractions.

Steve said Wendy’s violations were largely from faulty paperwork and confusing regulations, but some of the violations were due to keeping unlicensed animals and improper structures.

In June, the refuge had its second bear escape in three years before staff installed an electric fence to keep the bears secure. Even though the bears were found and returned to the refuge, Fraser said he recognizes this violation was substantial, and that in addition to the violation, the Halls apparently fabricated a story about how the bear escaped — he said refuge employees called the DEC to report the real reason for the bear escape, an act he said took bravery.

Servino said the DEC’s laws, regulations and license conditions are “in place to protect public safety, native wildlife, and regulated animals possessed under licenses issued by DEC.” She said the department worked with the refuge for years in an effort to address the violations.

Fraser said he has respect for the DEC and its officers, but he thinks the punishment Wendy has received is too great. He said Wendy is fearful of the DEC, which could have fueled her attempts to lie about the bear escape. He said whenever he talks to Wendy about the DEC “she visibly shakes.”

Steve also said that he and Wendy acknowledge their violations, but he thinks it’s the DEC’s bureaucracy that’s keeping the Halls from passing on the wildlife refuge to new owners.

The Halls chose Kevin and Jackie Woodcock of SkyLyfeADK to take over the refuge in its current capacity, but Steve said the DEC is “dragging their feet” by not granting them the Collect and Possess license, which would allow the currently endangered wild animals to continue living at the refuge. Steve said he feels like the DEC has a “vendetta” against him and his wife.

In a Monday email, Servino said the DEC had not received a Collect and Possess permit application from the Woodcocks. In a Tuesday email, Servino followed up and said that the DEC is “now in receipt of the applications from Mr. Kevin Woodcock and they are currently under review.”

“We need a miracle”

Even if the refuge doesn’t get a Collect and Possess license, the owners plan to keep it open.

Steve said the refuge would continue keeping animals that the DEC doesn’t have control over, mainly livestock. He said they’re interested in continuing their educational outreach with those animals, but that would still mean finding new homes for around a dozen wild animals currently living at the refuge.

Fraser and Steve said the loss of the wildlife at the refuge would not only be hard on the Halls, but they believe it will also be a disservice to the public, both educationally and economically.

The refuge offers public education in addition to their rescue, rehab and release efforts, according to the refuge website. Steve said they get around 50,000 annual visitors, and multiple schools in the Adirondacks send their students there to see and learn about the animals.

Fraser said he’s received an “outpouring” of emails from concerned residents in the Adirondacks. He said the conservation society is willing to lease the refuge land, reducing the Halls to landlords so that Wendy, who has terminal cancer, could stroll over her own land in peace while new staff take over, but the DEC rejected the permit application from the staff he would have used. Now, he said he just wants to help in any way he can.

“Now that she has terminal cancer and her life’s work is in harm’s way — it’s heartbreaking to see that,” he said.

Fraser said the main ways he’s trying to help are through fundraising efforts and connecting with government officials about taking over the refuge. He said his first priority in fundraising is ensuring that the animals are transported safely to appropriate locations before Oct. 25, though he’s also concerned about paying future staff. He’s submitted some paperwork to DEC Commissioner Basil Seggo’s office with a statement of intent regarding the conservation’s plan to lease and run the refuge, and Fraser hopes they can work something out about staffing issues with the government.

He said that with only a few weeks to go, “we need a miracle.”

LAKE PLACID — As the deadline approaches for the town of North Elba to decide whether to allow cannabis sales and ...

KEENE — The Keene Town Board voted unanimously to opt out of licensing marijuana on-site consumption ...