A common loon was taking a bath, while getting rescued 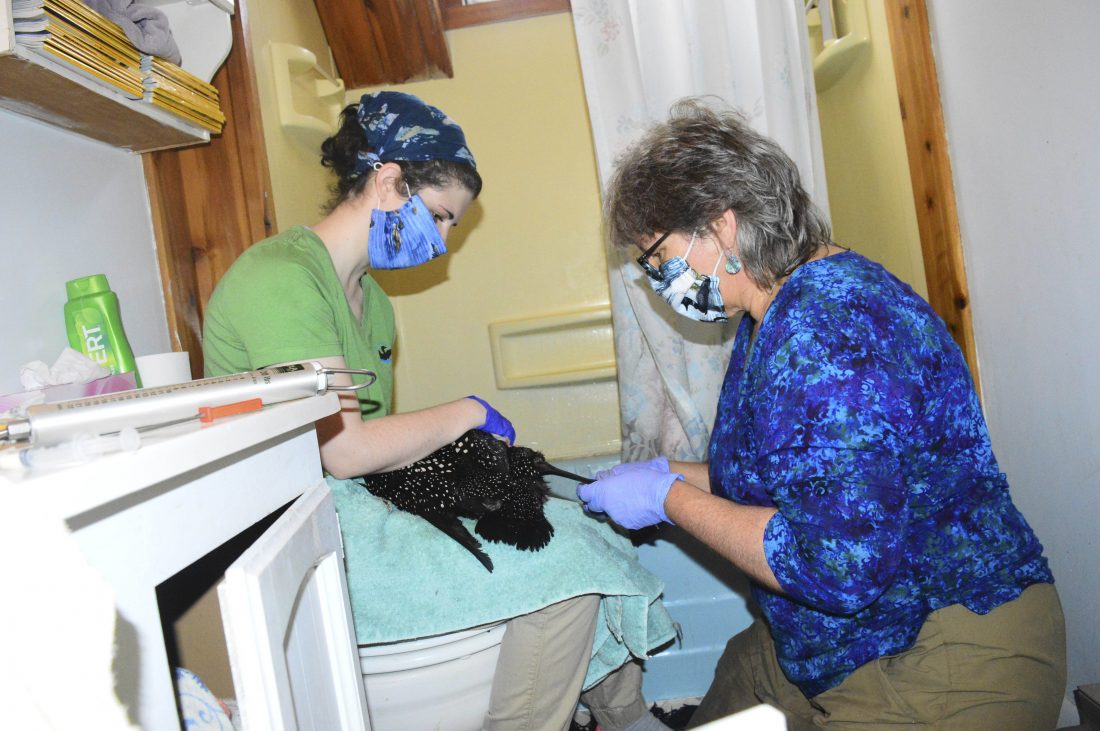 RAY BROOK — Nina Schoch had a loon in her bathtub.

It wasn’t the first time. Schoch, a wildlife veterinarian and executive director of the Adirondack Center for Loon Conservation in Saranac Lake, rehabilitates injured animals from her home semi-regularly. This was the first loon this summer.

Schoch got the call from state police troopers Chuck Bishop and James Gwinn at 6 a.m. Thursday, May 28 — cars were swerving around the bird, which was hurt and in the middle of state Route 3 outside Malone.

Schoch had driven out to pick it up and by 10 a.m. the loon was swimming back and forth in her bathtub, pecking at the porcelain and squawking.

The bathroom was small, but Schoch, Hyla Howe, an environmental educator at the center, and KT Shumway, a wildlife conservation technician at the center, all packed inside to measure, tag and give the loon an antibiotic shot.

Its wing was bloodied, and so were its webbed feet. The asphalt was no place for a loon.

“They need a runway,” Shumway said. “Just because of the way their bodies are built. Their legs are so far back and they’re so weirdly disproportionate with their weight. They’re perfectly built to be in the water, but not on land.”

Howe said the bird may have mistaken the road, which was wet from a rainstorm Wednesday night, for a water body. Schoch said it may have just been blown out of the sky.

The loon, which Schoch believes to be a female because of its size, was swimming normally in the bathtub, which means its feathers had remained water-resistant and its legs were in good shape.

The loon was squawking and hooting, and sometimes thrashing at the curtain. That was a good sign, the bird was healthy enough to fight.

Loons are tough. Howe said she once saw one with a scar on its chest where it had been stabbed by a rival loon. They can be fierce fighters — sometimes battling to the death — but they also can sustain significant injuries and keep on going.

Schoch and Shumway took the loon from the tub, and while Shumway held the bird tightly against her chest while sitting on the toilet, Schoch measured its legs and beak, gave it an antibiotic shot to help it recover from its scrapes, and attached a metal band to its leg. Schoch has a permit with the Biodiversity Research Institute in Maine to use these numbered bands, which biologists use to track birds.

Schoch dabbed the bird’s wound with a towel and her hand came back bloody.

The loon whimpered a bit when her wing was moved.

“I just hate when animals are hurt,” she said. “I feel their pain.”

The last thing they had to do was weigh the bird. This is easier said than done. The loon would need to be moved into a mesh bag, which would also be used to move her back into the plastic storage tub it was being moved in.

Shumway struggled with the 9.7-pound bird. If she was not holding on tight the loon would have spread her wings and flopped around the bathroom, possibly injuring herself and her rehab team.

Schoch said she would like to one day have a larger rehab facility to stabilize and transport the animals that are brought to her.

She said she can get dozens of calls a year, for animals such as loons, otters, moose and squirrels. A fraction of these actually result in rehabilitation though.

Schoch said there are three outcomes for animals which are injured and need rehab: “release, euthanasia and education.”

She said around half of all animals she sees are able to be released, some of the rest can live with their injuries in captivity, but some are too injured, and must be put down.

Loons, though, cannot live in captivity. If they stay grounded too long they can develop a fungal infection called aspergillosis in their lungs.

This bird had a short rehab. By 11 a.m. it was back in the water of Second Pond in the Saranac Lakes Chain.

Howe wondered if she could get a chance to hold the loon and help release her into the wild. Schoch wondered if Howe was “too squeamish.”

“You’ve got to be firm,” Schoch said.

Rehabilitating animals is tough. They do not want to be handled and don’t know their captors are trying to help them. Schoch had to do things that made this loon uncomfortable, scared or caused it pain. And she could not explain that it was for its own good.

Howe and Schoch cradled the loon in a towel as they removed her from the plastic tub and placed her in the shallow water. The loon flapped and bit at the towel as it was set down.

Then, as Shumway and Schoch’s son Jorge took photos, they let it go. As soon as it was free in the water the loon took right off, crossing to the center of the pond with a few strong strokes of her wings. The loon sat in the sunlight for a second, then dipped underwater.

As it surfaced around 30 seconds later, Schoch said the loon would do well back in the wild. She said the energy it showed as a good sign.

Schoch said once the loon gets up in the air it’ll be able to take in the landscape and find her way home. Or may stay and keep living in this territory.

“She did good,” Schoch said of Howe.

“I’m not squeamish, I’m not,” Howe insisted. “It’s just, when they make noises I really feel them.”

This was her and Shumway’s first loon release.

Schoch said there are around 2,000 loons estimated to be in the Adirondacks. She said their population has made a comeback from the 1980s, since the pesticide DDT was banned.

Eagles like to attack and eat loons of all ages: eggs, young and adults.

Climate change, which has resulted in more volatile weather patterns, causes torrential rains, which can wash out their nests in the spring.

Schoch said she hopes to create an “Adirondack Wildlife Health Institute” with Paul Smith’s College to create a combination training and rehab facility for students and experts to work at.

But for now, she is helping injured animals from her second-floor bathroom.