SAVOR THE SEASON: Heaven Hill Farm known for its cows 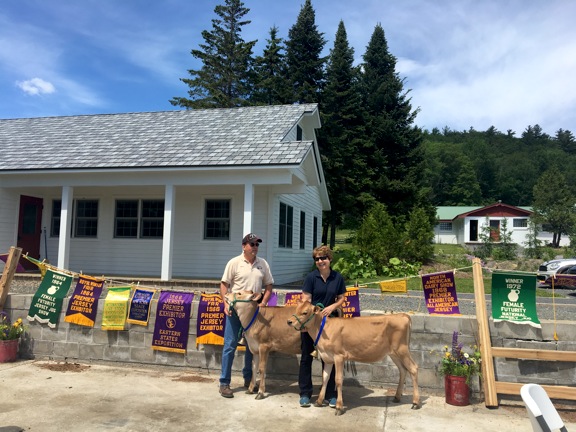 It was a reunion of sorts. More than 75 people had lunch outside at the farm, basking the sunshine, hosted by Heidi Roland of the Uihlein Foundation. They were on a field trip from the American Jersey Cattle Association-National All-Jersey Inc. annual meetings in Saratoga Springs, and they met two guests of honor: 4-month-old heifers Dorado Colton Emerald Bairn and Dorado C. Marie Jessie.

Owned by Wanda and Jerry Emerich of Mooers, the heifers were born in early March and can be traced back to the Bairn and Jessie cow families at Heaven Hill Farm. Wanda is the dairy outreach coordinator at the William H. Miner Agricultural Research Institute in Chazy. The farm’s former owners – Henry Uihlein II and his first wife Mildred – donated their cattle to the Miner Institute in 1987 when they retired from active dairy farming, and the cattle were bred in Chazy under the Heaven Hill name for about 10 years.

“We would always take some back for the summer so the Uihleins could enjoy them,” Wanda said.

The heifers represented the 11th generation in their respective families (Bairn and Jessie), according to Jerry, since the original members were purchased by the Uihleins in the mid 1960s. 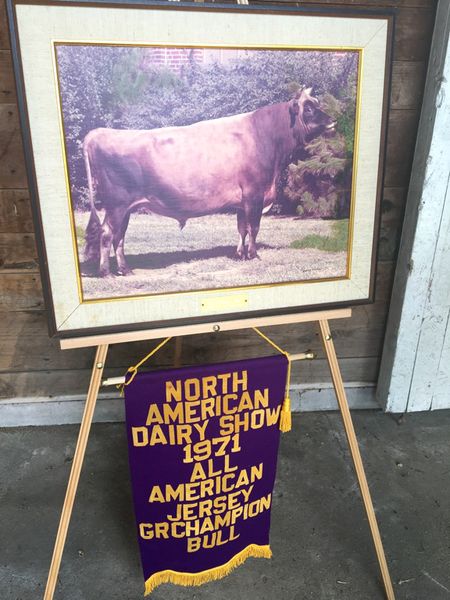 “The first ‘Bairn’ at Heaven Hill was Sybil AC Bairn (EX-95), who reigned as National Grand Champion in 1966, while the first ‘Jessie,’ Golden Jester Jessie (Ex-95), came to Heaven Hill from Iowa and was the All American 3-year-old in 1965,” Jerry wrote about the farm.

Many of the people visiting Lake Placid during the AJCA-NAJ annual meetings breed Jersey cattle.

“It was fun because there were people with us that their parents had worked for Mr. Uihlein, and they had never been to Lake Placid,” Wanda said. “And then there were other people who had been there. He used to host the New York state meetings every winter there. So they had come there as little kids.”

Jerry described the field trip in a written report:

“Joining the discussion were Phil (son of Max) and Marty Gordon, IN who brought portraits of many of the National Champions along with many of the banners won by the partnership of Henry Uihlein and Max Gordon over the years. Having worked with the Heaven Hill show string for several years, AJCA’s Ron Mosser added the ‘color’ commentary to the discussion, highlighting the importance of wealthy industrialists such as the Uihlein family in what he described as the ‘Romantic’ era of American Agriculture.”

The Uihleins showed cows and bulls at these shows, and each registered animal had a name and a number.

“It helps us with breeding them in the future but also tracing their heritage back,” Wanda said about the names.

For example, the Lake Placid News reported on Sept. 19, 1947 that the Uihleins’ 3-year-old Jersey cow called Jester Design Royal Nelly won a silver medal in production for the American Jersey Cattle Club. She produced 9,554 pounds of milk and 557 pounds of butterfat over a 305-day test period.

“In compiling this record, she produced more than two and one-half times as much butterfat as the average dairy cow in the United States,” the News stated. “She has also been officially classified for type by the American Jersey Cattle Club with the highest possible rating, excellent.”

As part of the display at the June 28 field trip, there was a photograph of a bull on an easel with a banner hanging from the bottom: North American Dairy Show 1971 All American Jersey Grand Champion Bull.

The Uihleins made their permanent residence in Lake Placid in 1941, buying land from the Lake Placid Club to create Heaven Hill Farm.

“The roots of this success go back to the day after the attack on Pearl Harbor,” stated Barbara Haddad’s story about the Uihleins’ award-winning cattle in the Jan. 5, 1961 issue of the News, “when Mr. Uihlein, who had lived in the North Country 25 years already, took title to the farm.”

Public notices printed in the News in October 1942 show that the Uihleins created their “private park” that year, the private park known as “Heaven Hill Farm.”

The farm’s first Jersey cows were acquired that same year. Haddad reported in 1961 that Mildred bought their first cow, Susie, from Herman Lincoln of Lake Placid, but Susie was a crossbred and therefore wasn’t eligible to be registered with the American Jersey Cattle Club.

“A few months later,” Haddad wrote, “a purebred was added. By 1956, there were 235 head, including milk cows, bulls, heifers and calves.”

On Aug. 24, 1956, fire destroyed the main dairy barn at Heaven Hill Farm, and five calves were lost. Workers had just brought the entire milk herd of 66 cows inside and were getting ready to feed them and prepare for the late-afternoon milking when they smelled smoke. The 66 cows were led out of the barn.

When people hear about the Heaven Hill Farm on Bear Cub Lane, they may think about the adjoining 4-mile network of Heaven Hill Trails, the Adirondack Foundation office located there or the property being used as a venue for many special events. Yet, it has a deep-rooted history in agriculture.

Henry Uihlein II was a grandson of Henry Uihlein, a longtime president of the Joseph Schlitz Brewing Company in Milwaukee, Wisconsin, and was a director of the company himself for several decades until its sale in 1982.

And they bred award-winning cattle for more than 40 years in Lake Placid and Lynn, Indiana. 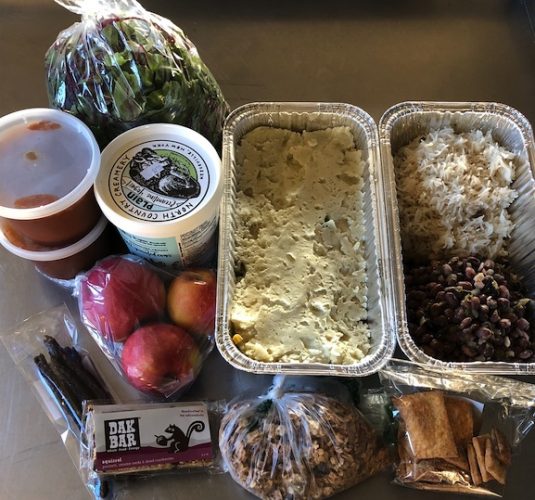