By sweeping the men’s singles race and taking gold in doubles, Germany delivered the first message of the Olympic season on Nov. 20 as the Eberspacher World Cup luge tour began in China.

The weekend events, which also double as the official pre-Olympic test of the venue, saw the American team enter Saturday’s two races at less than full strength — veteran athletes were missing. Olympic silver medalist Chris Mazdzer did not qualify in the Nations Cup in either singles or doubles with partner Jayson Terdiman in Friday’s Nations Cup competitions, but they anchored Sunday’s team relay for the United States.

Mazdzer, a three-time Olympian from Salt Lake City and a Saranac Lake native, broke his foot in late September and is getting acclimated to new sleds in both disciplines while recovering. Terdiman, of Berwick, Pennsylvania, a member of Team USA in 2014 and 2018, was also sidelined on opening day.

Teammates Dana Kellogg and Duncan Segger, 19th in doubles, recorded the team’s best result of the day. It marked the return to action for Kellogg, of Chesterfield, Massachusetts and Segger of Lake Placid, after travel restrictions kept them training at home last season.

Zack DiGregorio, recovering from injury during the International Training Weeks in China, and Sean Hollander made their World Cup debuts in 23rd place less than a year after forming their team. DiGregorio, of Medway, Massachusetts, and Hollander, of Lake Placid, are just 21 years of age.

West was in Sunday’s team relay lineup. Sunday’s women’s runs determined who races the lead leg for the U.S.

Toni Eggert and Sascha Benecken, of Germany, conquered the course in the first World Cup luge race in the nation’s history. In winning for the 47th time, the world champions and Olympic medalists dominated the field by 0.2 of a second and recorded the fastest times of both runs.

With temps in the Yanqing district in the 30s throughout the day, the winners clocked a two-heat time of 1 minute, 57.61 seconds to defeat the defending World Cup champions Thomas Steu and Lorenz Koeller of Austria. Third place went to Latvian brothers Andris and Juris Sics, who were 0.4 of a second behind the Germans.

Sleds from Austria and Latvia finished fourth and fifth, respectively.

Since winning an Olympic bronze medal in Pyeongchang, Germany’s Johannes Ludwig has brought his career to another level. He’s been in the top four overall in the World Cup each year since then and his runs were even better on Saturday.

Ludwig was over 0.8 of a second clear of the field, while the difference between Loch and Langenhan was merely 0.004 of a second. Defending Olympic gold medalist David Gleirscher, of Austria, took fourth place and missed the podium by 0.05 after sitting in second place at the intermission.

“I’m happy with my performance at the start and in the track,” Ludwig said in a statement. “Overall, I had very few mistakes in it.”

The Fischnaller cousins of Italy wound up sixth (Dominik) and 10th (Kevin).

Russia’s one-two punch of world champions Semen Pavlichenko and Roman Repilov were seventh and eighth, respectively. Similar to Arlt, Repilov had to deal with a positive COVID-19 result in recent days and missed some training runs while in isolation. The team is also dealing with the aftermath of doping sanctions by the IOC and will compete in February under the banner of the Russian Olympic Committee.

SLP boys fall to the Hornets in OT

SLP wins in overtime over Eagles 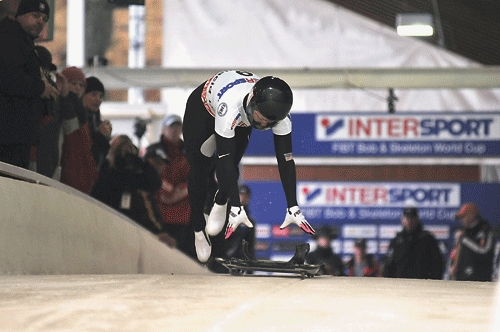