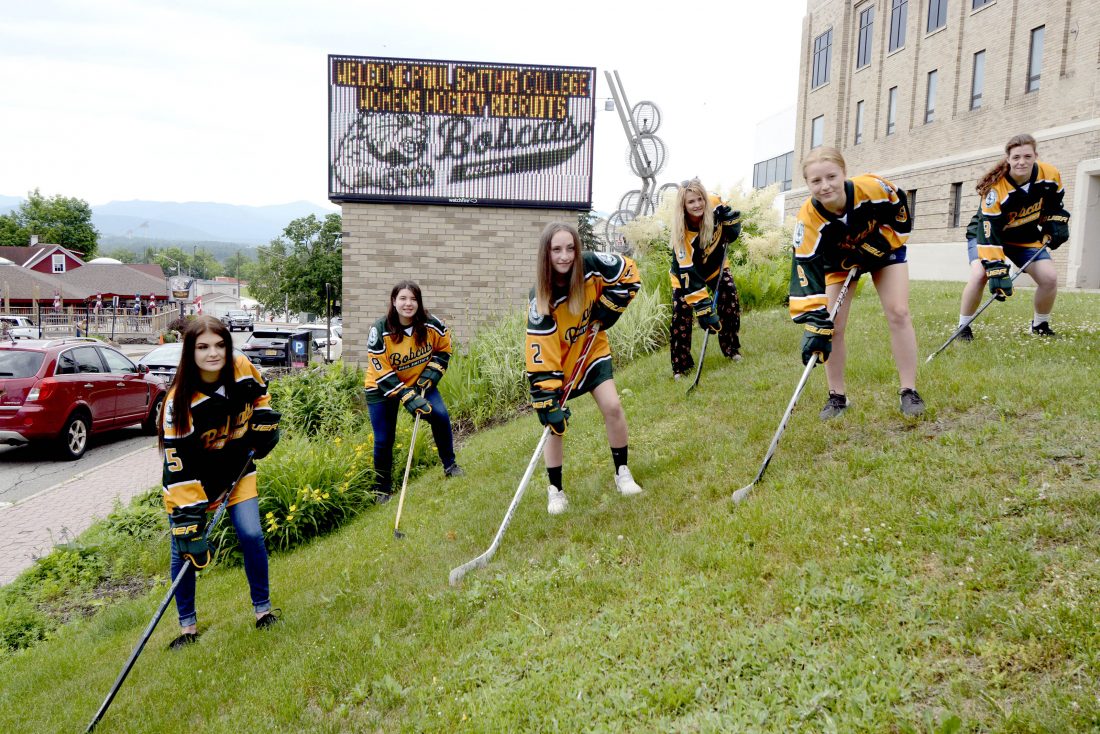 LAKE PLACID — With the coronavirus-driven uncertainty regarding colleges reopening this fall and what will happen when it comes to collegiate sports, there was certainly loads of optimism in the air in front of the Olympic Center in Lake Placid on Thursday, July 2.

Dressed in the green and gold hockey jerseys of the Paul Smith’s College Bobcats, six incoming student-athlete recruits who will be skating for women’s team in the upcoming season were introduced to the media in an outdoor ceremony on a warm day.

Although the Bobcats women’s team competed in their first actual season last winter, this year, the Bobcats are taking a major step forward as a new squad in the Independent Women’s Club Hockey League’s Presidential Division. It’s one of many leagues in the American Collegiate Hockey Association women’s Division II, which features more than 100 teams from across the United States.

As a brand-new team, Paul Smith’s College was in the IWCHL Adirondack Division during the 2019-20 season and the Bobcats are now stepping up to take on a tougher schedule.

Head coach Casey Gerrish enters his second season leading the team, and he’s had a full year’s worth of recruiting that’s yielded 11 new student-athletes for the school’s incoming freshman class.

“We have some players coming in from all over the United States — Wisconsin, Texas, Pennsylvania, Colorado, Georgia — and we have some local girls. It’s a good mix of talent.”

Gerrish said there are still unknowns regarding the upcoming season but noted that because the team is part of an independent organization not affiliated with the NCAA, he expects to have more flexibility surrounding the season.

“We’re in a nice situation,” he said. “We’re kind of in a gray area where we don’t have to worry about NCAA breathing down our necks. We’re in the ACHA where it’s a bit more independent, you have a little more freedom, but with that we still get to play against Division III teams, including Potsdam and SUNY Canton. We’re getting the best of both worlds.

“Last year was tough because it was our first year, we didn’t know what to expect,” Gerrish continued. “We beat our first opponent 17-0, nobody likes doing that. This year, we could see the likes of (club teams) Boston College, Boston University, UNH, UVM. All these teams are consistently ranked in the top-10 ACHA. Last year we were in the Adirondack Division and that was a little lower skill-wise. This year, it’s going to be the top echelon.”

The most local newcomer to the team is Ireland Preston, who graduated from Lake Placid High School just two weeks ago. Preston played forward for the combined Saranac Lake Placid girls squad for the past several years and is a speedy forward. She’ll be attending classes at both North Country Community College and Paul Smith’s College and is pursuing a career in the field of radiology.

Preston was joined by her mother Lisa in front of the arena while signing her letter of commitment at a table with a banner displaying the Paul Smith’s College campus on an autumn day as a backdrop for the event.

“I wanted to stay local. I was going to North Country for radiology and figured out I could play hockey for Paul Smith’s,” Preston said. “I just hope the season starts on time. We’ll just see what happens. I’ve been playing hockey since I was five and I want to keep it going. I just love the sport.

“I was told that I’m fast, so I can definitely help,” Preston continued. “And then I’m local so I can show everyone around, kind of be their tour guide. I think the last time I was on the ice was my last high school game, so I really want to get back on the ice again.”

Gerrish said he’s waiting on the signal from New York state as to when his players can get back to hockey.

“It’s still up in the air because none of the colleges know what’s going on,” he said. “We haven’t received a directive from New York state yet. We’re relying on them to tell us when we can start doing hockey, start doing soccer, and hockey is one of those high-risk sports. Once we hear from the state, I’ll be have a better idea. Usually early September practices officially start, and first games are usually early to mid-October. If all goes well, we’ll be eligible to compete in the national tournament if we get an auto bid or an at-large bid. That’s kind of what we’re aiming for.”

Two newcomers to the team and school present at the July 2 event are Izzy Hays and Diana Jones, who are excited about both playing hockey for Paul Smith’s College and also about attending the school itself.

Hays hails from Slippery Rock, Pennsylvania, and is coming to Paul Smith’s after playing the game in Ontario fo the past two years with the Hockey Training Institute. She said Gerrish came to see her play with HTI and she appreciated his interest.

“He scouted me one game when I was playing with HTI and approached me,” said Hays, who can play left wing or center. “Just his whole approach, his attitude toward the game, his passion about hockey and Paul Smith’s made me really interested in the school in general. And I really liked the diversity of the school, how different it is and that it’s in the mountains.”

Hays said her love of hockey and her interest the natural enviornment should make Paul Smith’s College an ideal fit.

“I’m looking at integrated studies — disaster management, sustainability,” she said. “I want to join the Peace Corp some day. I want to help people. I had a chance to visit the college, and no other school is like this one. It felt like home.”

“We get this rink for the first two months I think to practice in,” she said. “It’s just an honor in general to get to play at the Herb Brooks Rink. I’ve dreamed about this since I was a kid, and now it’s like wow it can actually happen.

“It’s amazing how many girls are coming from different areas to make up this team and everyone has their own set of skills,” Hays added. “I like that he (Casey) selected each girl for a reason. That’s something Herb Brooks did for the Olympic team. He picked each player for a reason. That’s when you know you’re going to have a good team.”

Diana Jones laced up skates for the first time at a friends birthday party as a 10-year-old and has loved the sport of hockey ever since. She’s a forward from Parker, Colorado, a town that’s situated at nearly 6,000 feet above sea level.

In addition to playing hockey, Jones will pursue studies in the field of bio-chemistry. She arrived in the Adirondacks on Monday, June 29 during her first visit ever to the area.

“I was looking at colleges where I could play hockey and coach Casey reached out,” Jones said. “He said ‘I have a team over here and I’d like you to take a look.’ When I first looked at the college online, I noticed it was outdoorsy, in the woods, kind of away from people, sitting on a lake — I actually liked the way everything looked.

“I play right wing,” Jones added. “I’m hoping to bring determination and the energy to keep going and not give up, even when it gets tough. You want to learn from losing instead of get upset about it.

“I’ve been on some really good teams and I’ve been on some not so great teams. I spent an entire season when we didn’t win a single game, and that was a tough one to get through, but we made it through. I think it helped me grow as a person and learn from it.”

In addition to 11 newcomers, Gerrish expects to have six or seven veterans returning. That group is led by a solid goaltender in Katy Snyder, a senior who will be playing her final season with the Bobcats.”

Gerrish said plans are to play games up to Thanksgiving and then restart the season in early January.

“Right now we’re looking at a 16, 18 game schedule, and that’s healthy,” he said. “Down the road we’re hoping to be playing between 20 and 25 games. I’m really excited about this group. We have some hockey players for sure.” 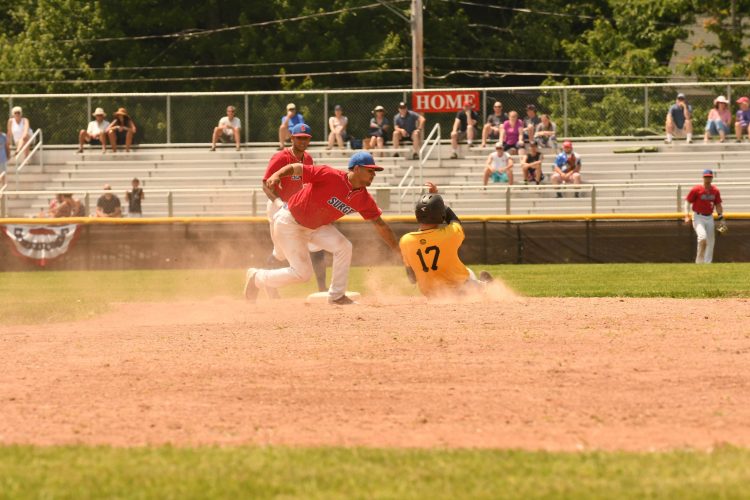 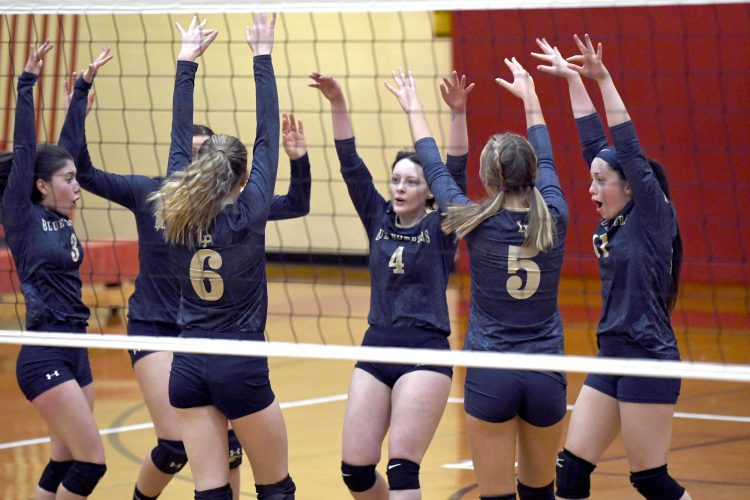