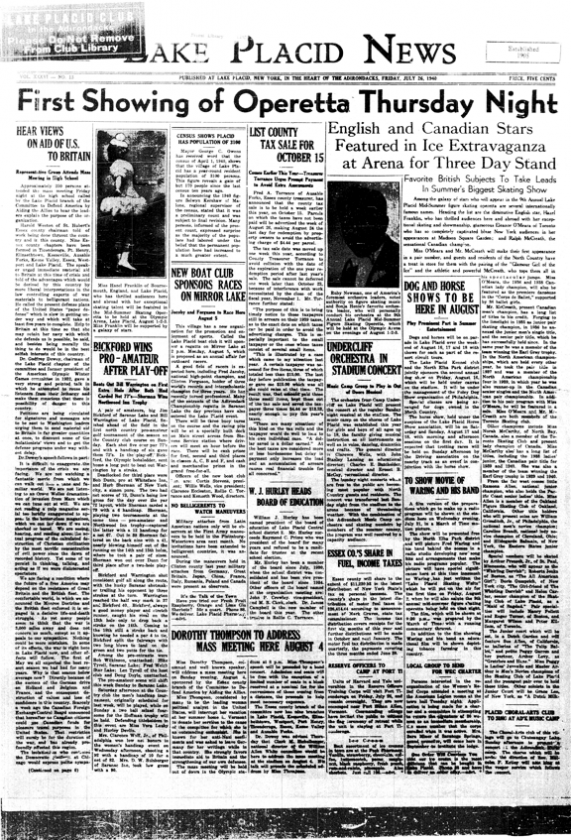 US aid to Britain

Approximately 250 persons attended the meeting Friday night at the high school called by the Lake Placid branch of the Committee to Defend America by Aiding the Allies to hear the leaders explain the purpose of the organization.

Harold Weston, of St. Huberts, Essex County chairman, told of the work being done throughout the country and in this county. Nine Essex County chapters have been formed in Ticonderoga, Port Henry, Elizabethtown, Keeseville, AuSable Forks, Keene Valley, Essex, Westport and Lake Placid. The speaker urged immediate material aid to Britain at this time of crisis and told of the advantages which would be derived by this country by more liberal interpretations in the law controlling exports of war materials to belligerent nations.

Dr. Godfrey Dewey, chairman of the Lake Placid chapter, gave a very strong and pointed talk in which he attempted to rouse his listeners and make them conscious that there is possibility of danger to this country.

Military attaches from Latin American nations only will be observers at the First Army maneuvers to be held in the Plattsburgh-Watertown area next month. No invitations have been extended to belligerent countries. During the maneuvers held in Clinton County last year, military attaches from Germany, Great Britain, Japan, China, France, Italy, Romania, Poland and Canada were present as observers.

This village has a new organization for the promotion and enjoyment of sports. Called the Lake Placid Boat Club, it will sponsor a regatta on Mirror Lake at 2 p.m. Monday, Aug. 5, which is proposed as an annual affair for outboard racers. There will be three buoy turns on the course, and the racing pits will be at a specially built dock on Main Street across from Stevens Service station where drivers will meet an hour before the race.

Dogs and horses will be on parade in Lake Placid over the weekend of Aug. 16-18 with shows for each as part of the resort circuit tours.

The Lake Placid Kennel Club and the North Elba Park District jointly sponsors the second annual dog show on Friday, which will be held under canvas on the stadium. It will be under the management of the Foley Dog Show organization in Philadelphia.

Special classes are being arranged for dogs owned in the North Country.

The horse show, held under the auspices of the Lake Placid Horse Show Association, will be on Saturday and Sunday, with morning and afternoon sessions on the first day. It is expected that trotting races will be held on Sunday afternoon by the Driving Association on the nearby track as an event in conjunction with the horse show.