BUG TALK: The attraction of moths 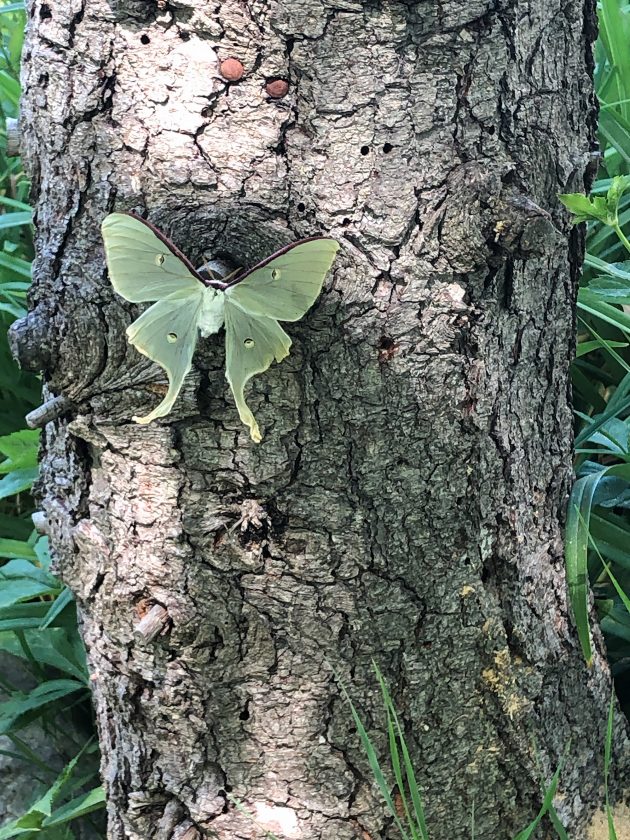 On cloudy country nights, darkness floods a verdant Adirondack vista. Without the pale illumination of moonlight, each mountain anchoring the horizon slowly sinks into an impenetrable void. Yipping howls of coyotes echo only through the foothills of my memory, as the wing beats of ethereal moths patter a futile rhythm against the pollen-dusted glass of our school’s pitch-black farmhouse window.

Why do they persist in their clumsy attempt to reach my gently glowing desktop lamp?

One controversial explanation is that light helps flighted nocturnal insects orient. Natalie Wolchover’s LiveScience article titled “Why Are Moths Drawn to Artificial Lights?” reminds us that moonlight strikes a moth’s eye at a reliable angle. This consistent trigonometry might allow moths to maintain their direction through a process called transverse orientation. This process purportedly works because the lunar light source is 238,900 miles away. Due to this great distance, the angle between the moonlight and the moth remains practically constant.

It is believed that the moth associates the upward direction with the light source, so when the moth encounters a different origin of illumination, it can’t determine which way is up, and begins a spiraling flight pattern. Although this hypothesis correctly predicts the looping and erratic motions of moths nearby lights, it does not account for all of the complex moth behaviors.

Another hypothesis mentioned in Wolchover’s article is built on work done by the U.S. Department of Agriculture’s Phillip Callaghan in the late 1960s and early ’70s. Callaghan found that the pheromones emitted by some female moths produce light through the process of chemiluminescence. Male cabbage looper moths are attracted to the light emitted by the female cabbage moth’s sex pheromone, (Z)-7-dodecen-1-ol acetate. Candle flames release a type of light that matches the light given off by this chemical, and male cabbage loopers have been observed dying in attempts to mate with the burning candle.

Regardless of the reason, lepidopterists regularly use light sources to monitor their prey. One mechanical manifestation of such entomological knowledge is the Robinson trap. This device typically uses mercury vapor or actinic lights to attract and disorient nearby moths. The trap triggers a downward spiral that ends in a collecting jar. These traps have the advantage of preserving the moths intact and free from any contaminants; pheromone traps that lure moths onto sticky surfaces make it harder for scientists to remove the delicate insects for further examination. Whereas light traps attract a wide variety of moths, pheromone traps only work on the specific type of moth attracted to that chemical. Pheromone traps must be applied when the moth is in the reproductive stage of its life cycle. That stage only lasts for about a week, in the case of the enigmatic Luna moth Actia luna Linnaeus (Lepidoptera: Saturniidae). This moth is not a pest, but it is prized by bug hunters.

One fact of crucial importance to pest control efforts is the limitation that pheromone traps only lure adult males. These traps are indispensable scouting tools, but since they don’t trap females or larvae, it can be hard to get reliable pest control with just traps. If a single, enviable male does not fall for the trap, he will have a harem of females at his convenience. This outcome can happen if the male is upwind of the trap, or perhaps too far away from it. If a male emerges from its pupa after the pheromone has worn off, he will be free to mate with any remaining females.

To address this limitation, scientists in the Steffan Laboratory at the University of Wisconsin-Madison, are blanketing entire cranberry beds with slow-release applications of moth sex pheromones. Pestiferous male moths cannot pinpoint the locations of females, because their mating signals are coming from all locations simultaneously. When the disoriented moths can’t find mates, they die without fertilizing any eggs, and the moth population declines during the next generation. This strategy has two major perks: By rendering pesticides unnecessary, beneficial arthropods like bees and spiders remain unharmed, and since the disoriented moths remain alive, they can be eaten by predators. This trophic exchange allows the natural enemies of moths to remain abundant on the marsh.

A complete explanation for why moths are attracted to light remains elusive. Aside from providing pest control clues, the moths have another lesson to teach. They demonstrate that we must not be distracted by temporary, flashy, social lures. By remaining true to our lofty and authentic aspirations, we can prevent the downward spirals of chaos that oftentimes afflict people who lose sight of their main goals.

Shane Foye is an entomologist serving as an AmeriCorps VISTA (Volunteer in Service to America) volunteer at Cornell Cooperative Extension of Essex County in the agriculture program.