Headlines from the News archives 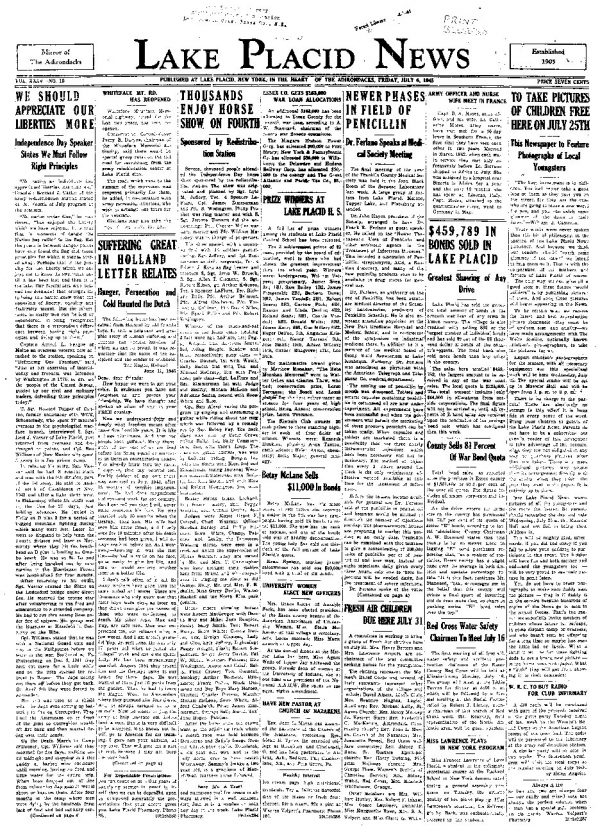 Philip Pitcher was ring master and with S. Sgt. Jerome Tomann did the announcing. Pfc. Chester Miller was barn master and Pfc. William Maroney was in charge of properties.

The show opened with a mounted drill of 15 soldiers. Cpl. Sam Alessi varied the program by singing and strumming a guitar while riding about the ring, which was followed by a comedy act by Sgt. Bobby Fay.

Whiteface Mountain memorial Highway, closed for the last two years, has been opened. Conservation Commissioner Perry B. Duryea, chairman of the Whiteface Memorial authority, said there would be special group rates on the toll road for servicemen from the army rehabilitation center at the Lake Placid Club.

The road, which runs to the summit of the mountain, was reopened primarily for them, he added, in cooperation with army recreation director, who wish to arrange bus tours for the veterans.

Civilians may also take the trip, if they have the gas.

Capt. B. A. Moses, army officer, and his wife, Lt. Catherine Moses, army nurse, have just met for a 10-day leave in southern France, the first time they have seen each other in two years.

Married in March 1942 when each was in service, they met only infrequently before Lt. Moses shipped to Africa in July. She was assigned to a hospital near Bizerte in Africa for a year and the past 12 months she has spent at Livorno, Italy. Capt. Moses, attached to the quartermaster corps, went to Germany in May.

Myron J. Crate of Malone was arrested last week on a charge of discharging a firearm in a public place. He pleaded guilty and was fined $2.50. He was also arrested on a charge of shooting an animal that had no malicious intent, stating that a number of dogs were in front of his house making a considerable disturbance, barking.

After trying to scare them away, without success, he shot off his gun in an attempt to further frighten them, killing a purebred cocker spaniel belonging to the children of Capt. Harold P. Muller, officer of troop B, state police. Crate pleaded guilty and was fined $25.

Sgt. Fred A. Gilman of Ithaca is an unusual returnee processing at the AG & SF redistribution station here.

Sgt. Gilman was a radio operator with a pathfinder platoon. His outfit would jump first and guide in gliders laden with airborne infantrymen to their designated landing areas. He made three combat jumps during his 17 months overseas: in Sicily, Salerno and in France on D-Day the night of June 5, 1944 as part of the 82nd Airborne Division, landing off St. Mere L’Eglise.