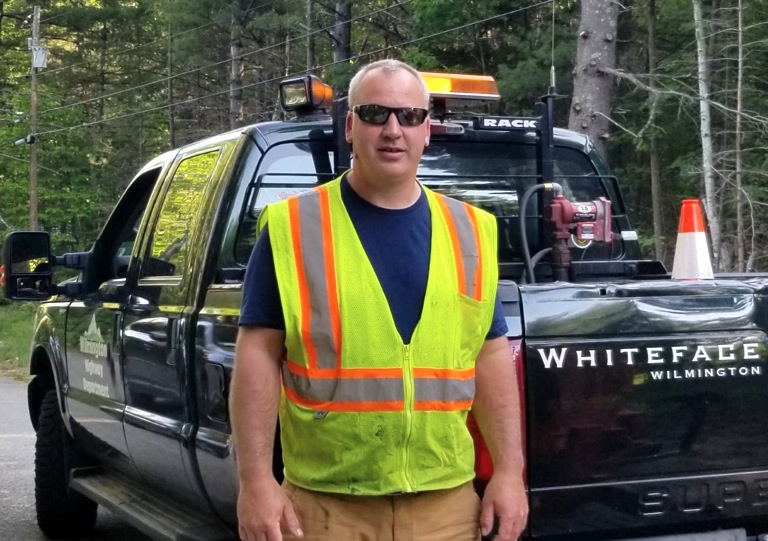 At age 44, Cameron Grady has established quite the impressive resume of experience that has become an asset to his position with the Wilmington Highway Department.

Hired by Highway Superintendent Louie Adragna in November 2019, Cameron has become a quick study on all things Wilmington and was able to hit the ground running on day one of joining our team.

Of course, knowing the “Wilmington Way” should come natural for this Wilmington native. He practically grew up on Whiteface Mountain. His dad Gary worked for the Whiteface ski center for 38 years.

Cameron attended the National Sports Academy in Lake Placid for several years. In fact, his training at the former sports-based school prepared him for impressive placements in the Junior Olympics. He was also a regular participant in the Empire State Games.

While attending NSA, Cameron met some pretty interesting friends. One of his fellow classmates was the great-great-grandson of the founder of Genesee Beer. Another student was the son of the doctor who invented the test tube baby.

Even with all the skiing and other influences of his days of youth, his real passion has always been engines and cars. The small-town life of growing up in Wilmington was influenced by local mechanics and his neighbor, Fran Kane. He fondly recalls that his interest in mechanical operations started at the age of 3.

For many locals, Cameron is the person to ask questions about cars. He has probably worked on half the community’s vehicles when he had his repair shop. His current project is restoring a 1964 Ford Galaxy that has become a time-consuming quest for him.

Cameron also has extensive experience in construction and blacktopping. In fact, he has pretty much worked in those fields from the time he was able to get his working papers at the age of 14.

He and his partner of 25 years, Jessica Ano, have two sons. In their spare time, they like camping and boating. Their family stays very active.

There is no doubt the citizens of Wilmington have benefited from Cameron’s vast experience. His knowledge of engines, construction and blacktopping will serve the town well. His roots in the community have certainly made him part of our Wilmington Way.

(Roy Holzer is the town of Wilmington supervisor.)