ON THE SCENE: Dealing with forests on the move 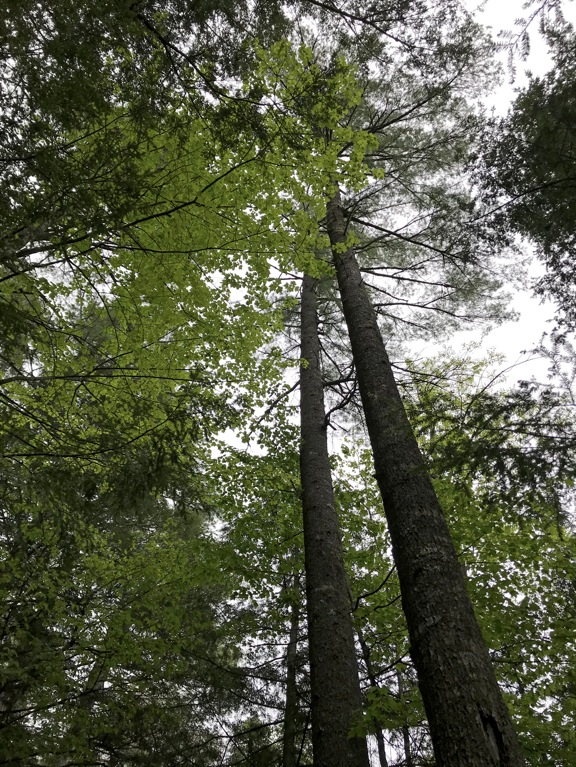 Trees in the town of Keene (Provided photo — Naj Wikoff)

Our forests’ character is fluctuating, to a certain degree, as a result of climate change, invasive species, and a growing overpopulation of deer amongst others.

The rate and cause of the change, along with possibilities going forward, was the focus of a recently released book and online lecture, held Thursday, May 21, by Dr. Charles D. Canham, a senior scientist at the Cary Institute. His book and talk were titled, “Forests Adrift: Currents Shaping the Future of Northeastern Trees.”

Topics in the lecture and book include how northeastern forests have changed since the arrival of European settlers, insights into current conditions, and science-based forecasting on how forests will adapt to logging, fire suppression, disease, air pollution, invasive species and climate change. Canham decided to title his book “Forest Adrift” because such actions have caused forests to change in a somewhat unpredictable manner.

“For many years, ecologists have used a model, a way of thinking about forests, within the framework of disturbance and recovery,” said Canham. “The framework presumes that forests will return to a very stable and predictable state if you just leave them alone. There is a lot of comfort in this notion, but ecologists have been questioning it for decades. There have been silos of research that have struggled to understand how human activities have threatened our forests. They have struggled to put their theories in any form of forest dynamic, let alone one as simple as disturbance followed by recovery.”

Following years of research throughout the northeast, and in other forests throughout the world, Canham has come up with a conceptual model that addresses all the different currents that will shape their future. His model abandons the old tried and true classification in favor of the idea that forests drift, and his job is to understand their flow, the causes of it, and where they are headed.

Canham feels it’s essential to understand the nature of our region’s forests before the arrival of 16th century Europeans. Although their evolution had very dynamic moments with some species, like hemlock, once far more present than today, plummeting to near zero 5,000 years ago, recovering and now flourishing, we humans have ushered in some dynamic threats that are of grave concern.

Canham said there are two principal sources of information about the nature of our forests since the retreat of glaciers 10,000 years ago. One source is the cores taken from the bottoms of lakes by paleologists, carefully sliced at different depths, and studied to extract information from pollen grains preserved. From this, they learn what pollen was dropped on the lake floor at different periods of time since the lake was formed.

Another more recent source, since the arrival of Europeans, has been the observations of surveyors who are required to describe the trees at the corners of lots (size, names, etc.). What scientists have learned is that before the arrival of Europeans, there had been many changes over time, but not as dynamic as they have been since the Europeans arrived, most notably in areas where agriculture was relatively easy to develop and areas that were aggressively logged.

In our region, widespread logging and the fires that followed in the late 19th and early 20th centuries had a modest impact as the forests quickly rebounded following the creation of the Adirondack Forest Preserve. While we think of our region being huge, combined with Catskills have few others that have “Forever Wild” protections, it represents just 5% of the forests over the nine-state region. In protected areas like ours, trees are allowed to fully mature, which can take two or three hundred years, and thus maximize carbon sequestration. Yet overall, 60% of all the canopy trees within the nine-states die as a result of logging. The kind of logging, clearcutting vs. selective cutting, coupled with few trees being allowed the chance to fully mature, impacts the diversity and character of the forest going forward.

Although invasive plant species is a problem resulting in 35% of the plants in northeastern forests being non-native, introduced by Europeans such as apple trees, the more significant threat is invasive pests and pathogens such ash blight and bore beetles. Of grave concern is that we here in New York have the highest concentration of such threats to forests in the nation.

“The threat of invasive pests and pathogens terrifies me,” said Canham. “They’re depressing. The source is packing materials and live-plant trade that, to a great degree, comes in through the ports around New York City. Many of these pests and diseases come from a similar climate in China, similar enough to enable them to attack our species which have no built-in defense.”

Canham described how valuable the black and white ash are to wildlife and other plant life as well as to Native American basket makers, boat makers and such activities like baseball. Ashes have no defense; not one has survived the rapidly spreading emerald ash borer. Other devastations include Dutch elm disease, chestnut blight, beech bark disease, butternut canker, and now one attacking walnuts that’s coming east.

On a positive note, Canham said research is demonstrating that overall our forests seem to be relatively stable at resisting climate change, that they will adapt. He described them as very likely to be the most resistant ecosystem to climate change on the planet. They have evolved over millions of years wherein dramatic changes have occurred, such as being scraped down not once but several times by glaciers. Canham said our forests are very used to it being very hot one day and freezing the next as we’ve experienced over the past couple of weeks. They can’t adapt quickly, it may take a few hundred years, but while that’s a big deal to us, it isn’t to them.

“Trying to predict the future while the world is changing as rapidly as it is, is probably a fool’s game, but it’s important that we think about all the different currents that shape the way forests will change,” said Canham.

Added to that, he urged us to support research and advocate for policies like the Tree Smart Trade initiative, and other actions that address problems that we humans are causing, including the over-abundance of deer and the challenges they trigger.

“Canham’s book is helping me process how historical land use has shaped the forests we live in today,” said Mary Thill, communications manager for the Adirondack Land Trust. “It’s helping me understand what I see as I walk in the woods. I am especially enjoying the historical parts of the book. There are a lot of eye-openers, it’s a good read. He’s helping we lay-people better understand the forests that surround us.”

“It’s a very nuanced and complicated picture out there,” said naturalist and Adirondack guide Ed Kanze about current and potential future of our forests.