HISTORY IS COOL: 60 years ago 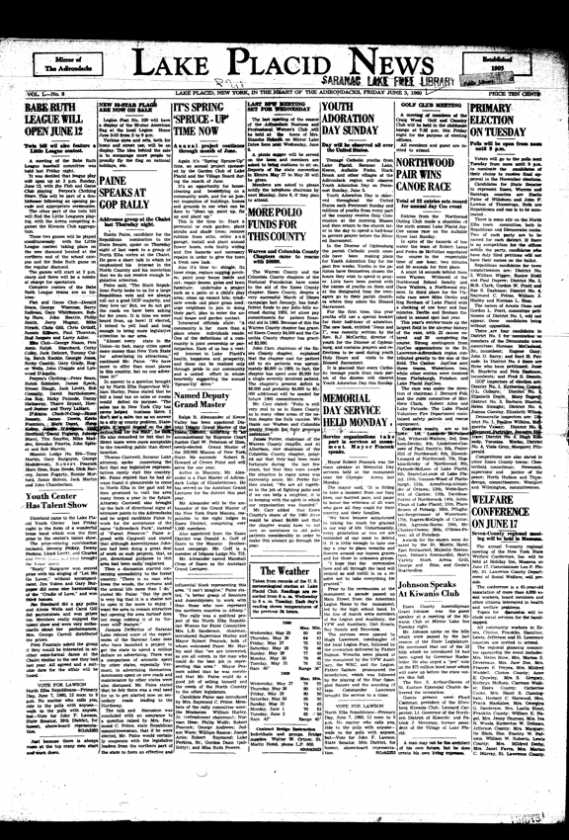 Various sizes and sets, both for home and street use, will be on display. The idea behind the sale is to encourage more people to proudly fly the flag on national holidays. (Hawaii became the 50th U.S. state on Aug. 21, 1959. The new flag became official on July 4, 1960.)

Again it’s “Spring Spruce-Up” time, an annual project sponsored by the Garden Club of Lake Placid and the Village Board during the month of June.

It’s an opportunity for house cleaning and beautifying on a community scale, and for an honest inspection of buildings, homes and grounds to see what can be done to “clean up, paint up, fix up and plant up.”

This is the time to: start a perennial or rock garden; plant shrubs and shade trees; remove rubbish from the attic, cellar and garage; install and plant annual flower boxes; note faulty wiring and fire hazards and necessary repairs in order to give the town a fresh new look.

A meeting of the Babe Ruth League baseball committee was held last Friday night. It was decided that league play will open up at 2 p.m. Sunday, June 12, with the Fish and Game Club playing Peryea’s Clothing Store. This will be part of a double header following an opening parade and appropriate ceremonies.

The other part of the twin bill will find the Little Leaguers playing, with the Arena competing against the Kiwanis Club aggregation.

These two games will be played simultaneously with the Little League contest taking place on the new diamond located at the northern end of the school campus and the Babe Ruth game on the regular diamond.

Complete rosters of the Babe Ruth League teams are as follows: