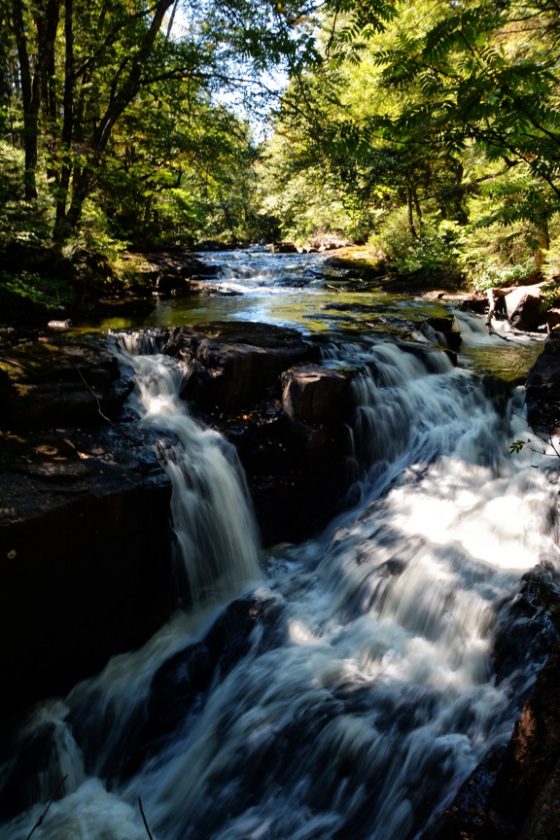 I had heard of PA Falls from previous readings and studies on the history of the region but up to this point had never visited them. It was also clear from my research that it had a trail or in the least a path back to them, but a bit unclear as to where to find this said trail.

Corenne and I had a half day available for this hike, and she suggested we go back and check out PA Falls, you never have to ask me twice about visiting a waterfall, or hiking for that matter. Corenne knew the trailhead location well because she in fact visited it a while back and for once she would be leading me on a hike. The trail is located off State Route 421, also known as Horseshoe Lake Road. There is a yellow state gate on the left roughly 2.5 miles in from Route 30, this was the spot, a small sign on a tree also labeled it Winding Falls. A more permanent trail is designated for here and as of now is being worked on.

It looked as though the trail has been used fairly frequently and regularly, surely a local crowd. It wasn’t too long before we came across a lovely beaver marsh, mainly dry but obviously flooded at one time. The old forest road that we were following was all but swallowed by the flood gates, leaving the only option of travel, a beaver dam. The beaver dam was an old one, eaten up by moss and grass, it was a bit unstable but with careful footing it was a dry traverse. On the opposite side the old road was obvious once again.

Now climbing slightly more, the pole sized yellow birch started to appear and lined our route. Using the narrow path through them we continued up and over the highest point along the trail. The descent was long and continued at different degrees for much of the remaining hike. On a long hot summer day, it would be one of those climbs back out to the car that would be noticed without a doubt. Passing through groves of birch, spruce, and hemlock and then some grassy fields, we finally found ourselves at the old bridge over the Bog River. There isn’t much left of the bridge but it is still safe enough to cross, but to reach PA Falls that would not be necessary.

We backtracked a bit and followed another trail off to the left just prior to the bridge and to the top of PA Falls, only a couple hundred feet further downstream. There we had an amazing view of the upper falls and the monuments to Dad, or PA, as this case may be. A faint path continued down through the woods to the river below the falls.

A rocky shore led us out to a view of the lower falls but the grander upper falls could not be seen. The lunch bell soon went off and what a perfect spot for a picnic, minus the blanket, wine, and wicker basket of course, but we did make due with a small rock, a backpack and Nalgene of water. We were already buzzed by the beauty of the river we didn’t need wine to get us any further, but a beer was another story.

The hike out was a quick one, even with a short side trip to Split Rock Falls, which we found to be much less awe inspiring than PA Falls, but if you are up to the short spur, go for it. The spur was just up the trail a hair and would be on the left on your way out; a small sign points the way. This is used as a portage trail for those adventurous enough to paddle the river. We couldn’t see the falls very well, and the slippery rocks on the river’s edge didn’t give us open arms to the top, so we side stepped and headed back to Horseshoe Lake Road.

The climb back out and over the height-of-land was not at all taxing and nowhere near as steep as it felt on the way down, odd how that is sometimes. We emerged back at the car three hours later, a very relaxed three-hour tour in the Horseshoe Lake Wild Forest.