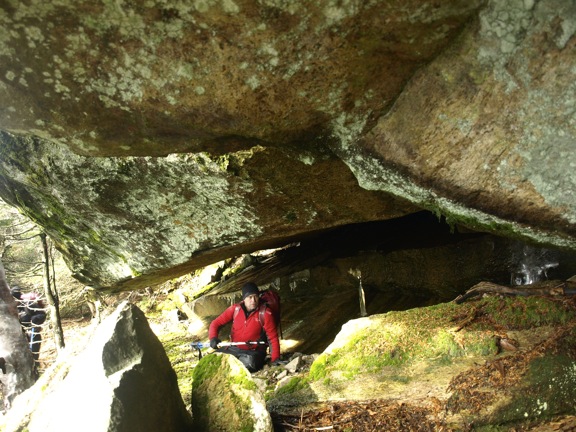 Lewey Mountain is the 69th highest peak in the Adirondack Park and can be easily seen around Indian Lake because it towers over much around it. No real definitive trails will get you to the summit of the massive expanse of land, but by following the Sucker Brook Trail from the Lewey Lake Campground you can get pretty darn close.

This would be the day that we did just that. Lewey is no stranger to my tracks and it seems every time I venture onto this mountain I find myself fighting thick bands of spruce and balsam. I was determined to find a better path, and what better way to do it than to invite some friends along? Accompanying me were Corenne, Joe and John, a group that wouldn’t be lacking in intriguing conversation. Corenne is working on completing her Adirondack 100-Highest adventures and this would be number 79 for her. Joe is a Saranac Lake man would bend our ear on the concept of community-based trails and lodging. John is a historical-research-guru extraordinaire, in his own mind, whom would fill our brains with information which I could only hope to repeat later when the time came.

We hit the trail earlier than necessary, but in not knowing what the new route would present to us it was better to be safe than sorry, especially when the days are so short. Happily I am writing this on the shortest day of the year, so things will start going in the other direction and our vitamin D deficiency will hopefully begin to be cured.

We progressed up the lightly used Sucker Brook Trail from its trailhead off of state Route 30. It eventually passes through the West Canada Lake Wilderness to the Northville-Placid Trail. We wouldn’t use it for that long, however — only about 2.5 miles of it would pass us by. A steady climb over a leaf and blow-down littered trail brought us to a few brook crossings, none of which posed any navigational issues. Once across the final major tributary of Sucker Brook we started a steady climb to the shoulder of the eastern ridge of Lewey Mountain.

Once upon the shoulder we knew it was time to leave the ease and comfort of the trail and start our cross country adventure up the spine of the ridge. With our GPS devices locked and loaded we started the steep climb. Large boulders of all shapes and sizes dotted the ridge, and many were large enough to look down upon us. Some balanced as though a strong gust of wind would displace them, and of course John took full advantage of the opportunity to scramble to the top of one.

The ridge is such a narrow line up the mountain that if one was to look at a map one would suppose an occasional view would welcome us. If we wanted one we had to go get it and we did. The open hardwood forest gave us opportunities to peer out toward Indian Lake — the water body not the Hamlet — and further into the wilderness toward Snowy Mountain.

Soon the ridge closed in around us, just as remembered, and we had to make our way through the tighter bands of evergreens. We found many openings along the way that made our final travels to the summit much easier.

Long bands of moss covered rock blocked a direct path, but their position on the mountain gave us better views. As we stood on the wooded summit of Lewey the sun came through the trees, producing long rays in the moisture in the air and creating a very spiritual look within the otherwise dense surroundings. A long hiatus from movement gave us the opportunity to discuss the game plan for the descent. Would we use our route up and just call it a day? I didn’t think so. The real question was, do we try a secondary ridge or go right for the Sucker Brook cirque? After a bit of deliberation and the rest of group allowing me to choose, they never learn, I picked the cirque. It would be a direct route down and it seemed like the perfect option.

We literally fell off of the mountain. Well, Joe did, anyhow. I think his footwear got the best of him on the steep slopes, but the rest of us did get a coating of mud on our backsides from the need to slide off lips of open rock and under weaved branches of balsam. At least the balsam made John smell good. I dropped off of a small lip of open rock and found myself looking back under one of the largest overhangs I had ever seen in person. Going back nearly 20 feet was a massive overhanging rock with ice that seemed to seep through its pores, creating stalactites of ice and minerals at the very back.

Impressed by the feature, we hung around a while before we set on with our forward movement into the cirque. The trees were a bit thick in areas but overall much better than what most other ridges handed us. Before we knew it, we burst out into the open hardwood forest. Open is an understatement. At times the separation between trees was so grand we had broad freedom of motion. Once upon the headwaters of Sucker Brook we followed its shores to give us a direct route back to the trail we started on earlier that morning.

The forest remained open, and the babbling waters sang to us over small cascades and colorful maple leaves. I started a conversation about hunting camps and how this would be a perfect location to happen across one. This perfect area was located along a crisp brook, in an open forest with nothing around but the quiet of the wilderness. No faster did I get the thought out of my mind we stumbled upon a barrel, then two, then three, definite signs of some sort of old camp. One of them was still closed, heavy and full of something; we had to investigate. We unclasped the barrel ring and what was inside was a dead body, we couldn’t believe it! And neither should you, it was just hunting camp junk. Someone had rolled up a canvas house and made a “camp in a can,” for lack of a better term. It had been there for quite some time and the moisture made it crumble in our gloved hands. We stuffed the musty roll back in and left it behind. We wanted to carry it out as the trash it was, but the heft of the wet canvas was just too great for any two people to manhandle. We called this Camp 1, as Camp 2 was only about 5 minutes further downstream and a few hundred feet off the trail.

Camp 2 was much more extravagant, with a wood stove, lanterns, sleeping bags, mugs and so much more, but it was all just left for dead. The tarp and canvas roof had collapsed in from heavy snowfall, and it didn’t look like whoever left it there was concerned about retrieving it. Again this was way too much to carry, and without a sled and ample snow it would remain there for who knows how long.

Now back on the trail and a bit further in we started out. We had to climb slightly to make the ridge and close the loop, which was only about a half mile away. Our trip back to the car was uneventful and actually much quicker than our conversation-slowed pace was on the way in. Back at the trail register we diverted into the campground to get different scenery as we walked back to the car through the deserted summer village.