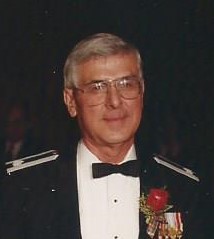 Lt. Col. George Mosey, 90, died peacefully on June 25, 2020, in Jupiter, Florida. A decorated veteran of the Korean and Vietnam wars, he served his country in the U.S. Air Force with dedication for 30 years. As a navigator in flight and director of logistics on the ground, his meritorious service extended around the world with postings in Japan, Vietnam, Germany and England. After retiring from the military, he managed product testing for Electrical Testing Laboratories in Cortland, New York, then transitioned into teaching at high schools in Syracuse and Keene, New York.

An avid outdoorsman, traveler and volunteer, George was an active member of his community. He hiked and paddled in the Adirondacks, completing the 46 High Peaks at age 63. He shared his love of the mountains by volunteering in the Adirondack Mountain Club, Adirondack Trail Improvement Society, the Ironman Lake Placid triathlon, and international events at the Mount Van Hoevenberg Olympic bobsled and luge Center. He joined the Lake Placid Curling Club and participated in the 2000 Winter National Senior Games.

Starting with service as altar boy in Nekoosa, Wisconsin, his lifelong devotion to the Catholic Church was exemplary and he was instrumental in keeping St. Brendan’s Church in Keene, New York, open when diocesan reorganization threatened to close its doors.

George was a member of the American Legion, Marcy Post 1312 , enthusiastically raising funds for community projects including major improvements to the Veterans Memorial Park in Keene.

George was a loving husband, father and grandfather, and his kind and generous spirit will live on in the hearts of his family and friends.

He is survived by his wife, Marcia Mosey; daughters Dinah Kirby, Jane Mosey-Nicoletta and Susan Mosey and their spouses; and seven grandchildren.

A memorial service is planned in Keene sometime in 2021 followed by burial at Arlington National Cemetery.

In lieu of flowers, donations are welcomed to the Adirondack Mountain Club, American Legion Marcy Post 1312 or Trustbridge Hospice Foundation.