No better place to heal than the Adirondacks 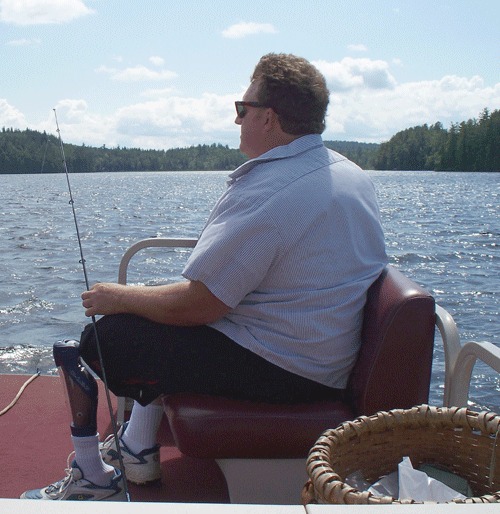 Photo by Joe Hackett “Bill,” a longtime guest from Ohio, was wounded by an IED while on patrol in Iraq. Despite having been an avid fisherman his whole life, he was apprehensive about returning to the water due to concerns over the electronics in his new Smart Leg. However, soon after getting comfortably settled on the boat, he returned to angling with a vengeance, claiming “fishing is undoubtedly the very best therapy known to man.”

In honor of Veterans Day, l would like to share a history of local veterans facilities and provide some insights on the curative qualities of our local natural surroundings.

Currently, there are more than a dozen programs across the country that utilize the outdoors as a therapeutic environment for returning veterans. The proposed Patriot Hills project, now known as Homeward Bound Adirondacks, is one of more than two dozen veterans rehabilitation facilities that are currently being considered across the nation.

Considering the region’s extensive history as a natural cure center, there remains tremendous potential for the development of a facility in the Adirondacks. If a facility is eventually located in the region, it would have the advantage of the region’s incredibly crisp, clean, fresh mountain air that results from the photosynthesis process occurring over a six million acre forest of balsam, spruce, pine and hardwoods.

This vast natural fresh-air factory is enhanced by the flowing waters of more than 30,000 miles of streams and rivers, which are shadowed by hundreds of soaring peaks and surrounded by thousands of lakes and ponds.

A realistic advantage related to the health benefits of natural surroundings is that of social interaction. Acute exposure to green exercise has proven to improve self-esteem and positively affect mood, which are both indicators of sound mental health.

Additional research indicates that exercising in green environments located near water provides even greater health effects. Subjects report their overall mood significantly improved, and feelings of anger, depression, tension and confusion were all significantly reduced as a result of green exercise.

Another study, conducted by the University of Glasgow and the University of St. Andrews found that living near parks and forests provides an overall health boost, as the use of parks and green space for walks and physical activities was proven to regulate blood pressure and alleviate the harmful effects of stress. These studies indicate that exercise in natural environments resulted in greater feelings of revitalization, increased energy and positive engagement, together with decreases in tension, confusion, anger and depression.

Such tangible results would lend credibility to the benefits of locating a veterans rehab facility in the region, where the woods and waters abound. The influence of flowing waters, air quality, mountains and the other unique aspects of our regional landscape create a natural energy that is particularly restorative and rejuvenating.

Consider what the experts have to say:

“I go to nature to be soothed and healed, and to have my senses put in tune once more.”

“I am well again, I came to life in the cool winds and crystal waters of the mountains.”

Although the Adirondacks are best known for the region’s historic health resorts, several generations of military veterans also enjoyed the benefits of the local healing woods. In 1920, at a cost of more than $4 million, a federal hospital for ailing World War I veterans was established in Tupper Lake (currently known as Sunmount). Many of the veterans were suffering from tuberculosis or mustard gas poisoning. Initially, the facility was slated for Saranac Lake, but town fathers turned down the offer.

Prior to construction of the federal hospital complex, veterans had flocked to the American Legion Veterans Mountain Camp, which was located on the southern end of Tupper Lake. The pleasant, peaceful setting among the woods and waters was considered especially conducive to their eventual recovery.

The initial American Legion facility featured a large complex of buildings that were devoted to the care and convalescence of returning WWI, WWII and Korean conflict soldiers, who were suffering from an affliction known at the time as “shell shock” or “battle fatigue.” In current lingo, these same ailments are known as Post Traumatic Stress Disorder (PTSD).

The American Legion Veterans Mountain Camp, which operated from 1919 until 1965 was funded exclusively by an annual fundraising drive conducted by the New York American Legion.

It admitted servicemen, as well as women, and included a remote outpost camp on nearby Horseshoe Lake, which was only accessible by train. The current state Route 421 to Horseshoe Lake did not exist at the time.

The outpost provided patients with a true primitive camping setting, with a combination of tent platforms, open camps and small cabins, as well as an infirmary, recreation center, dining hall and a commissary.

Trees were felled along the shores of Horseshoe Lake and a rough-hewn facility was constructed entirely on state forest preserve lands. The construction constituted the first allowable breach of the Article 14 covenant.

The Legion’s Horseshoe Lake Outpost permitted veterans and their families to spend the summer together while recreating in the woods and on the local waters.

According to a facility brochure, “The hills have the health-giving qualities of the soft woods, with their fragrant germ-destroying odors, the efficacy of which in curing disease is universally admitted.

The air of this region is pure, clear and humid and at all times invigorating, forming one of the main attractions and sources of pleasure. As soon as the sun lowers in the west, the temperature drops, and be the day ever so hot the evening is cool, the atmosphere is tonic. People from inland places who are suffering from insomnia generally experience little or no trouble in obtaining refreshing sleep with its resultant health and strength.”

GIVING BACK: A ride close to home