WILMINGTON — Among the paints and brushes in Rachel Finn’s art studio in Wilmington are boxes of old fly fishing lines and feathers. Finn is a seasoned artist and fly fishing guide, and those two worlds visibly overlap.

Finn, 60, learned how to fly fish from her late husband, Jeff Kirschman, a longtime fly fishing guide at the Hungry Trout Resort and ski patrolman at Whiteface Mountain. Kirschman fished his whole life, and he shared his love of fly fishing with Finn.

“He created a monster,” she said Tuesday, April 26 in her art studio.

The couple guided together for years at the Hungry Trout, where Finn still guides, and they spent 10 summers guiding in Alaska. Finn, who grew up in Massachusetts, met Kirschman when she was in art school at Skidmore College in Saratoga Springs. Finn moved on to get a graduate degree in art from the Yale School of Art, and she said the natural next step for most students leaving the program was to pursue an art career in New York City. But while Finn moved to the city, Kirschman made his way to Lake Placid.

It turns out Finn wasn’t much for the city, either. Though Finn said she wouldn’t trade her time there for anything, the city art scene was “brutal.” It was like being in high school all over again, she said, when you’re afraid to go to the bathroom and interact with the “cool girls.” Between the networking and the art openings and the politicking, Finn said that art life in the city wasn’t for her.

“I was terrible at selling myself,” she said.

Finn lived in the city off and on for 10 years while Kirschman tended bar at Jimmy’s 21. Eventually, she joined him in Lake Placid before they made their way to Wilmington and the Hungry Trout. Now, Finn is in her 30th year of being a fly fishing guide.

Finn said she’s always learning new things about the waters here. She often goes “bluelining” — a term unaffiliated with the Adirondack Blue Line — where she finds a small blue line on a map, indicating a small stream, and seeks it out. Sometimes it’s mud and mosquitoes, and sometimes it’s a gold mine. Either way, Finn said she’s still exploring.

“There are still many places I haven’t been up here, and that’s what I love about this area,” she said, “is just when you think you know it all, you can look at a map and find something else, or look at something else in a different way.”

The meeting of worlds

Finn has an art show coming up at the Tahawus Cultural Center in AuSable Forks, and most of the work she wants to show is under the theme “It’s all home water.” She’s a Patagonia affiliate, and the phrase is a slogan used by the brand to raise awareness about the importance of improving water quality around the globe.

A Patagonia decal in the shape of a fish has recently become what Finn calls her “entrance way” into her art. She’s been tracing, stamping, stenciling and otherwise using the decal as the basis for many of her pieces. Finn considers herself an abstract artist, and she likes to insert abstract elements into the fish shape.

For Finn, art is about the process, and hers is an intuitive one. She doesn’t start with any preconceived ideas of how she wants a new work to end up looking.

The paint splotches, drips and runs on the walls of Finn’s studio are the signs of Finn’s “physical” way of making art. But she’s not always adding paint to a work. Creating a piece can also be a reductive process for Finn, which could involve taking elements away from a painting by scraping, sanding, or wiping off — like an intentional weathering process. Sometimes the process can go on for years. Finn said she could look at a painting she did 10 years ago and be inspired to add or take away something from it.

Finn’s organic and physical way of making art comes through in her finished pieces, and it’s not just the fish that evokes the natural elements of her work. A close look at one of her paintings could reveal a pattern that’s like a ripple in water, or a texture like sand or stone. That’s no accident. Finn said she knows the effects certain artistic techniques will produce, and she’s often inspired by what she sees while she’s out fishing.

Using the Patagonia-branded decal adds some latent commentary to Finn’s work about what it means to affiliate yourself with something superficial. There’s a style of Japanese printmaking called Gyotaku that involves spreading ink on a dead fish and making a print with it, which Finn has used to communicate this concept. Finn is strictly a catch-and-release angler, but she tried the style out with her decal a few times for fun. The first time she made a print with the decal she used paper towels as her canvas, and the Bounty logo is highlighted by the ink from the Patagonia decal, doubling up on the logo effect and adding commentary about material disposability.

“I should have just stopped right there, because I thought that spoke about everything,” she said.

She said she doesn’t expect people to get that social commentary out of her work, but it’s there.

Finn loves classic nature artists like Winslow Homer and the Hudson River School painters, but she’s not afraid to add modern elements to her already-abstract style. She’ll sometimes take photos of her fish paintings, run the photo through an art app on her phone and post the finished product to Instagram. It’s like a Post-It note for art, she said — she can make a couple of those pieces in a day. Her art background taught her that art was about seeing the work in person, and the digital, disposable aspect of posting her art to Instagram brings that preconception, along with issues of scale, under the microscope.

Finn plans to show some of her digital art on a screen at the Tahawus Cultural Center art show.

“All in this together”

The fish is a loaded image right now, Finn said. The fishing world is in trouble along with the rest of the world, from human-made climate change to human-waged wars. After Russia invaded Ukraine, Finn said she sat in her studio wondering how she could help. She made a few blue and yellow pieces, a nod to the Ukrainian flag colors, and she was reminded of Patagonia’s phrase — “It’s all home water.” She believes issues like climate change and the wars happening across the world affect everyone.

Finn said she’s entering a period of her life where she wants to give back, highlighting the importance of protecting the environment.

Finn said that as a fly fishing guide, she’s not just teaching people how to fly fish; she’s a steward of the land. She said there are a lot of new people on the fly fishing scene, which is great, but they need to learn how to fish ethically as climate change bears on and waters are warmer more consistently.

It’s all home water, Finn said, but she has a “love affair” with the West Branch of the AuSable River, which runs through the town of Wilmington. She encouraged people to get involved with the Ausable River Association and become more active in protecting waters there, including herself in the statement.

Finn’s artwork will be on display at the Tahawus Cultural Center from May 14 to June 26 as part of the “Wild at Heart” multi-media art show, along with art by Alison Haas and Susan Burdick Young. There will be an opening ceremony at the center from 4:30 to 6:30 p.m. on May 14.

People who want to attend the opening are encouraged to RSVP by calling 646-734-0703 or emailing tahawuscenter@gmail.com. People can also see Finn’s art by appointment or during the gallery’s open hours every Saturday from 1 to 2:30 p.m. 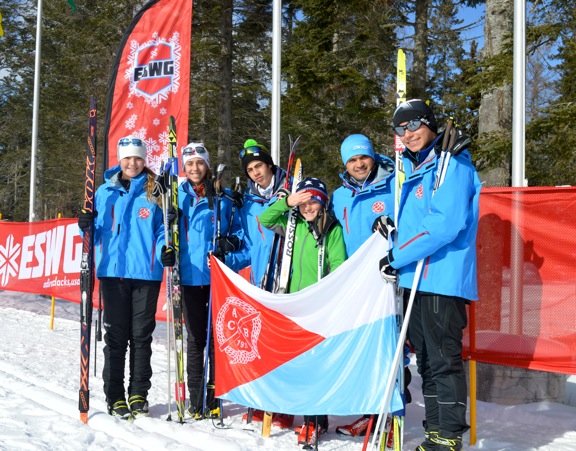