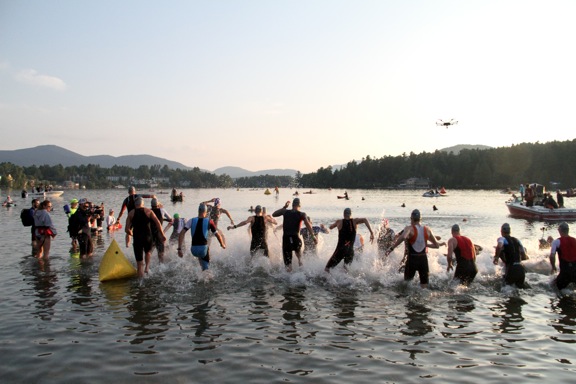 LAKE PLACID — Lake Placid’s large-scale sporting events are expected to move forward this year despite the ongoing coronavirus pandemic, organizers said during a conference call hosted by the Regional Office of Sustainable Tourism on Thursday, March 18.

The Ironman triathlon, the Lake Placid Summit Classic lacrosse tournament and the Lake Placid Horse Shows are all expected to happen this year, organizers say. Representatives from each of the events said they planned to follow whatever state guidance is in place when the events happen.

“Ironman, as of now, does not have any testing or vaccine requirements,” he said. “We will perform screening daily for athletes and visitors going into our venues and for volunteers as they check into their stations.”

But, he added, “we are months away at this point, and will adjust as requirements evolve.”

Borzilleri noted that there are layers of approval the event has to go through — state, county, and then the organizers need authorization from local governments in the towns of North Elba, Keene, Wilmington and Jay.

He acknowledged that controlling Ironman spectators would be “a difficult thing to try to accomplish.”

ROOST CEO Jim McKenna told event organizers that “certainly there’s going to be a system in place where you’re going to have to prove” that the people being admitted to events are either fully vaccinated or have tested negative within a specific time frame. He said the onus of making sure they’re able to verify that will be on organizers.

The state is working on rolling out the “Excelsior Pass,” McKenna noted. The Excelsior Pass is a cellphone application that will have a unique QR code for each person. Organizers should be able to scan that QR code to confirm whether or not the person has been fully vaccinated. The app hasn’t been officially launched yet, but New Yorkers can sign up to take part in early app testing with the online form at https://forms.ny.gov/s3/Excelsior-Beta.

George Leveille, co-founder of the Lake Placid Summit Classic, said lacrosse players are eager to get back to Lake Placid.

“They’re looking forward to getting back this year,” he said. “We’re clearly trending toward. … It’s very possible, very probable that events will be happening. For us, it is essential that we operate, but we want to do what is appropriate given the pandemic. … We think the next 30 to 60 days will give us the guidance, and we’ll be able to articulate what’s happening this year.”

Lori Martin, executive director of the Lake Placid Horse Show Association, said the same for those who attend the horse shows in Lake Placid each year.

The Songs at Mirror Lake concert series will happen in some form, somewhere, according to Songs at Mirror Lake Chairman Bill Billerman. Organizers of the weekly, free series plan to follow whatever guidance there is from the state when the season comes around, and they’ve got backup plans to host events at the horse show grounds or the Lake Placid Center for the Arts.

During the call, McKenna and ROOST Chief of Staff Mary Jane Lawrence touched on expected travel trends for this year. Research from Longwoods International, a market research firm, suggests that the pandemic will continue to affect many people’s travel plans. Among a survey of 1,000 people, 32% said they planned to choose a destination they can drive to rather than fly to — Lake Placid has been a popular rubber-tire destination for decades. Fifteen percent of people said they wouldn’t travel at all, or would choose rural destinations. Eleven percent said they would cancel trips altogether. More than a third of people said they would wait until they’re vaccinated before traveling. About 44% of travelers who were surveyed supported opening their own communities to visitors.

LAKE PLACID — Suggested alterations to the local land-use code were presented to the North Elba Town Council and ...

Most Tri-Lakes residents have been partially vaccinated

SARANAC LAKE — More than half of Tri-Lakes residents have been at least partially vaccinated, new state and ...

Who’s running for school board in your district?

Candidates have filed to run for school boards in districts around the Tri-Lakes area, and many races are shaping ...