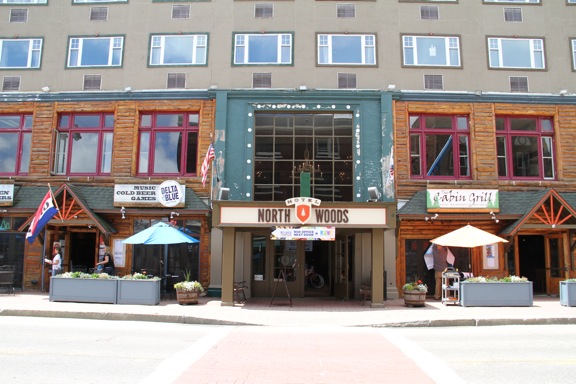 LAKE PLACID — A public hearing on a slate of exterior renovations to the Hotel North Woods drew just one comment Wednesday, Nov. 4.

The comment, before the Lake Placid-North Elba Joint Review Board, came from longtime Lake Placid resident John Huttlinger, who took issue with a part of the renovations that will see a part of the hotel’s rooftop area transformed into a seasonal outdoor event space.

“I think it’s a great idea on the restoration, particularly in the vein of the Hotel Marcy,” he said. “It’s great to see the work being done. My comment is to oppose the rooftop restaurant-bar. I live in the adjacent neighborhood.

Huttlinger said neighbors have “lived with activity on the roof of that building in the past” and that “there is virtually no way to muffle the sound coming up the hill.”

“I’m a native of Lake Placid. I love to see the development that’s happening in the town. I think it’s wonderful. Sometimes I think the development opportunities take precedence over the quality of life of us in this town,” he said, citing the years-long discussion within this community over short-term vacation rental regulations and the impact of rentals on the village’s year-round residents.

“I would just hope that those of us who are year-round residents, working every day in the community, are considered when developments like this are planned,” he said.

Larry Wright Jr., president of Wright Investments, a partner company on this hotel renovation, told the Enterprise on Wednesday that the rooftop area is intended as a place where locals and guests can gather.

“We wanted to make sure we had something that was special and unique for really everybody,” he said. “We really wanted to have it where the family that lives in Lake Placid can enjoy the views and everybody can kind of feel like this is something we can share together. We’re pretty excited.”

The rooftop will have space for upward of 134 people, according to planning documents. There’s expected to be a permanent enclosed bar with some seating, but the event space will be used seasonally, from June 15 to Columbus Day weekend, noon to 10 p.m. People will be able to rent out the space for weddings and other gatherings. There will be background music and some live performances there during operating hours, according to planning documents.

Review board Chairman Bill Hurley suggested the board approve the exterior upgrades, with a few caveats: The rooftop space would have a mandatory shutdown at 9 p.m. with everyone off the roof by 10 p.m., and if there are multiple violations, the review board may be able to revoke approval for the rooftop area. The review board also holds jurisdiction over exterior lighting for some time after the project is approved, meaning that if permanent lighting is installed there, the review board can weigh in on it.

The board ultimately agreed to allow Hurley and asked the board counsel to draw up a conditional approval for this project.

The 1920s-era hotel is undergoing renovations intended to bring back its original look, when it was called the Hotel Marcy. When it’s complete, it will be renamed the Great Adirondack Hotel.

Lake Placid Hotel Partners LLC, the owners of the property, have asked the review board for permission to install a new faux-brick facade, north-side elevator and new energy-efficient windows, and reconfigure the main entry portico.

The planned new exterior, shown in planning documents, appears to be white with black awnings and a black portico in the lower third of the building. The upper part of the building appears to be faux brick with white accents. There are also a number of interior upgrades planned for the hotel.

Wright said this renovation will touch “every square inch” of the historic property.

“It will be the nicest, newest, freshest hotel in downtown Lake Placid,” he said.

The new Great Adirondack Hotel will be operated under the Marriott Tribute brand. The goal is to complete the renovations by summer 2021, according to Wright.

The Hotel Marcy opened its doors for the first time on July 6, 1927. Despite the hotel changing hands a few times, enduring a fatal fire that destroyed its left wing in 1966 and being renamed a few times, it has been a Main Street mainstay for more than 93 years.

Ironman back with major changes to 2021 course

LAKE PLACID — The Lake Placid Police Department is planning to open a drop-off box where residents can securely ...

North Elba ‘games of chance’ law will be put to voters Nov. 2

LAKE PLACID — A proposed law that would allow games of chance in the town of North Elba is expected to appear on ...