WE ARE LAKE PLACID podcast: Wayne Coffey, author, “The Boys of Winter” 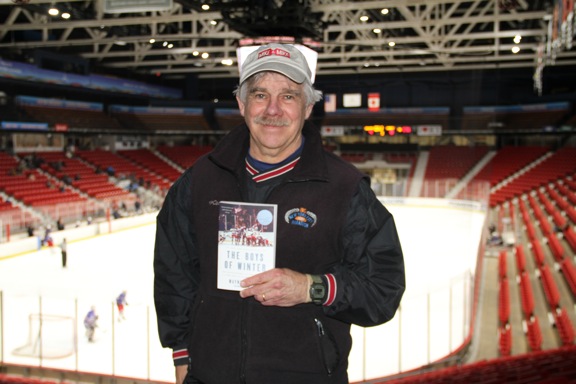 Wayne Coffey poses with his book, “The Boys of Winter: The Untold Story of a Coach, a Dream, and the 1980 U.S. Olympic Hockey Team,” Thursday, Feb. 20 at the Olympic Center’s Herb Brooks Arena in Lake Placid. (News photo — Andy Flynn)

LAKE PLACID — Lake Placid News Editor Andy Flynn interviewed former New York Daily News Sports Writer Wayne Coffey about his 2005 book, “The Boys of Winter: The Untold Story of a Coach, a Dream, and the 1980 U.S. Olympic Hockey Team.” It is about the “Miracle on Ice” game, and the interview was held at the rink where the U.S. team won that famed game against the Soviet Union on Feb. 22, 1980, and the gold medal game two days later against Finland.

Listen to a portion of this interview on the “We are Lake Placid” podcast from the Lake Placid News by visiting Apple Podcasts at https://podcasts.apple.com/us/podcast/we-are-lake-placid/id1388667446?mt=2.

Also listen on Soundcloud at https://soundcloud.com/user-340941505 and Stitcher at https://www.stitcher.com/podcast/lake-placid-news/we-are-lake-placid.

This podcast is sponsored by Adirondack Health.