SAVOR THE SEASON: The Iroquois gave us much more than corn, beans and squash

This painting by David Fadden at the Six Nations Indian Museum in Onchiota shows an illustration at the Three Sisters outdoor exhibit. (News photo — Andy Flynn)

ONCHIOTA – There are several snap bean plants growing up green poles outside the Six Nations Indian Museum. It’s part of an exhibit on the Three Sisters:

“Reflected in this panel are the feminine identifications traditionally assigned by the Iroquois to the life sustainers: corn, beans and squash … the Three Sisters.”

According to Iroquois tradition, the origins of the Three Sisters comes from mythic stories handed down from generation to generation.

“Corn is said to have sprung from the breasts of the Earth-Mother who died upon delivering the twins, Good Minded and Evil Minded. Thus the food of the mother’s bosom still continued to give life to her offspring.”

That origin was attributed to Arthur C. Parker’s “Iroquois Uses of Maize and Other Food Plants.” 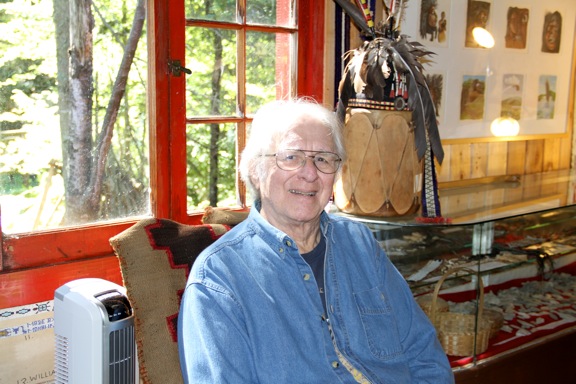 Ray and Christine Fadden and their son John opened the museum in the summer of 1954. It’s a small building with only four rooms, and it’s jam packed with more than 3,000 native American artifacts, mostly from the Iroquois Confederacy, which consisted of five nations – Mohawk, Oneida, Seneca, Onondaga and Cayuga – before the Tuscarora were accepted in 1722, becoming the Six Nations.

Ray and Christine have since passed away; however, John still runs the museum with his sons. They tell the story of the Iroquois nations – the Haudenosaunee (People of the Longhouse) – which had territory throughout New York state and lands to the north and south. Primary settlements were in the Mohawk River Valley.

John tells stories today, but he learned them first from his father, who used to give visitors a presentation about the food contributions from Native Americans in North America and South America.

“There was a stereotypical view generally about Native Americans, like they all lived in teepees and rode horses,” John said, “and part of that stereotypical view was that Indians were hunters, period, not even a thought that they had gardens or not. So he would give a good section of his talk about the different food plants, and he’d name them off: corn, of course, potatoes, tapioca, pineapple. ‘That didn’t come from Hawaii,’ he’d say. ‘That came from South American Indians, and it was brought over to Hawaii.'”

In the third room of the museum on the wall is a large map of North America and South America illustrating all the food contributions made by Native Americans.

Another outdoor exhibit, with a painting by David Fadden of a Native American woman holding a basket of harvested plants, explains some of the foods native to the Americas.

“A little known fact is that 75 percent of the food plants that are consumed by the world’s population originated in the Western Hemisphere.”

That quote was attributed to the “Encyclopedia of American Indian Contributions to the World,” published in 2002.

A list of some of those foods, printed in Parker’s book, shows that the Iroquois domesticated 13 varieties of corn, 13 varieties of beans and five varieties of squash. In the gardens, there were also three types of melons, “husk” tomatoes and sunflowers. Plus, foods gathered from nature included leaf and stalk foods such as wild peas and wild asparagus; fungi and lichens such as mushrooms and puffballs; fruit such as blueberries, grapes and plums; nuts such as hickory and acorns; root foods from plants such as arrowhead and cattails; and sap from trees such as sugar maple and birch.

Throughout the year, it was Iroquois tradition to give thanks for all the food they consumed, starting with a maple-tapping ceremony before the spring.

“Each of these ceremonies throughout the year was to give thanksgiving to the sustenance that we gather from the Earth,” John said. “It could be in the form of domestic plants or a natural phenomenon like a maple tree. But you give thanksgiving to the maple tree, the essence of it. In the process, you’re also thanking creation for all of the trees.”

Other ceremonies that followed included one for strawberries, the planting of the seeds and one for green corn toward the end of the season.

“This all ends up in mid-January, and that’s called the new year. It’s a several-day event,” John said. “Part of it is that you give thanksgiving for all of those things that were given to us from nature and domestic plants from the previous year.”

During the ceremony, ashes are symbolically stirred.

“What it means is that you start the fires over again, so the following year begins at that point,” John said.

The Iroquois traditionally didn’t eat meals like we do today – breakfast, lunch and dinner. Instead, there was always a kettle of food cooking over an open fire. John describes a dish that translates to corn soup, made with white hominy or yellow corn.

“You’d have meat in it with corn, beans, squash and natural plants that grow in the forest. … The meat, of course, back in the day it would be venison or beaver or some other natural meat. But today often it’s hamburger.”

LAKE PLACID — This year’s tentative property assessment roll is now complete in the town of North Elba and ...

LAKE PLACID — The village of Lake Placid has received its first two applications for an exemption from the ...

EYE ON EDUCATION: ‘Mountain of a man’