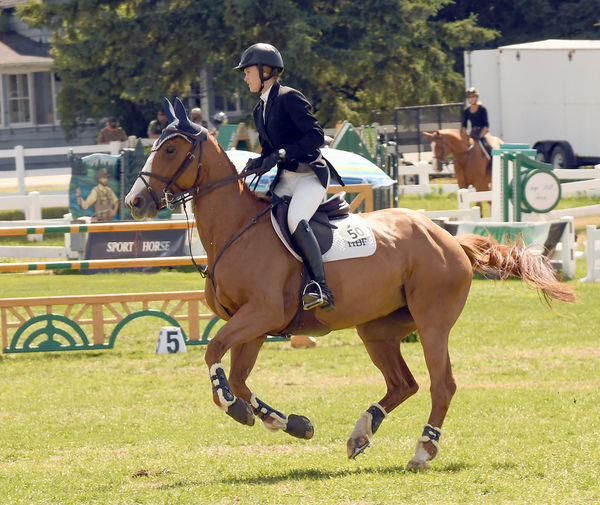 Chloe Field rides Tess De Jalesnes during the jump-off round in the grand prix held on Saturday at the North Elba Show Grounds in Lake Placid. Field said Lake Placid was one of her “bucket list” horse shows before she starts law school this fall. (News photo — Lou Reuter)

LAKE PLACID – Richard Feldman surely would sure have been proud.

Except for a bout of extreme heat early, this summer’s two-week run at the Lake Placid horse shows was a resounding success, according to officials in charge of one the world’s premier equestrian events held annually at the North Elba Show Grounds.

Feldman, the founder and longtime chairman of the horse shows who passed away in March, would no doubt have been pleased with how the event unfolded this year. The two weeks of action opened with the Lake Placid Horse Show and was followed with the I Love New York Horse Show, which wrapped up on Sunday.

Philip Richter took over for Feldman as the chairman last summer, and said that despite the scorching heat during the opening days of the shows, the event was as well received as ever. Next year, the Lake Placid Horse Show will celebrate its 50th anniversary in Lake Placid, and this summer, entries in some of the competitions had to be turned down.

“I think it was one of the best two weeks in the record books,” Richter said Saturday, following the grand prix at the I Love New York Horse Show. “It was a little hot the first week, we had a lot of entries, a lot of interest in the show – totally over-subscribed. We did the best we could to accommodate as many people as we could, but we can’t take everybody because safety is the No. 1 priority and you can’t have the shows going on all night. We had to limit the entries and we’ll actually have to tighten next year and limit more.” 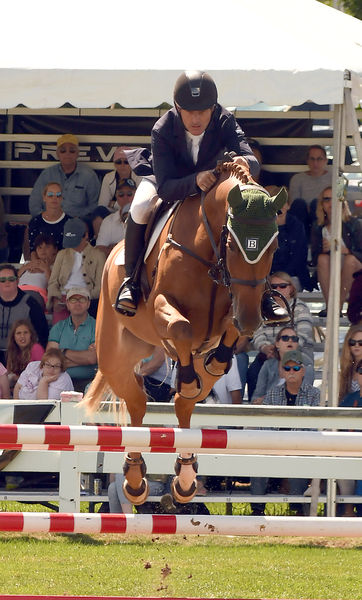 Although the Lake Placid Horse Shows aren’t the largest equestrian events that are held this time of the year, they are iconic, and often draw a who’s who of riders to the Adirondacks each summer. This year, some of the biggest names in the sport of show jumping competed, including Canadian Ian Millar, a 10-time Olympian, and American McClain Ward, who came into the final days of the shows as the third-ranked rider in the world.

At age 71, Millar competed in the horse show’s first grand prix on July 1.

“Ian’s ridden in more Olympic games as any equestrian. He’s participated in the most Olympic games of any athlete in any sport, period,” Richter said. “He could have been at the bigger shows but chose to come here. And then McClain Ward shows up for the second week and he’s No. 3 in the world. It’s phenomenal that these riders want to come here.”

Lake Placid’s Lori Martin is the executive director of the shows. She said 1,001 horses were shown during the opening week and 925 took part in competitions in week No. 2. She explained the biggest problem this year was power outages that took place early on due to extreme heat.

“Last year the big problem was the rain, this year it was the heat,” Martin said. “We had some electrical issues with all the fans, refrigerators and freezers that were being used, so we’re looking at upgrades there heading into next year. The good thing is, there were zero heat-related injures in regards to the competitors and horses. It was awesome. The only complaints I heard were long days and heat, and we got through them both. People left with smiles.”

Martin said the shows drew about their usual 10,000 spectators. The first grand prix attendance was low due to the heat, but that number bounced back to about 2,000 for the second grand prix held on Saturday, July 7. She added that plans in the works for next year included a $150,000 project to upgrade the footing in all the competition and warm-up areas used at the horse shows.

With the 50th version of the Lake Placid Horse Shows coming up next year, Martin also said the shows are looking into being designated a United States Equestrian Heritage Competition, which is reserved for events that have existed for 25 years or more and have made significant contributions toward the development and promotion of the sport.

Richter pointed out that Lake Placid is always the place to be at this time of year, not only because the weather is usually ideal, but also when it comes to the summer time activities that can be enjoyed away from the North Elba Show Grounds.

“If you think about it, the last couple weeks of June, the first week of July, these are the hottest times in the Northeast and this is the place to be,” Richter said. “The temperature is great. We did have a lot of heat but relative to the rest of the Northeast, we were in the right place. This is where you want to be with horses because of the weather.

“We’re going to work hard over the next three, five, 10 years to continue to build on all the things that Richard Feldman did to put us in this position,” Richter added. “I think we’re going to raise the money in the grand prixs, we’re going to improve the footing, continue to innovate, continue to make it great for exhibitors and spectators, and owners and trainers and everybody who comes here. I’m thrilled to be chairman. I’m thrilled to be involved. We have a great team of people who are dedicated to the show.”

Richter said that above all, the horse shows offer Olympic caliber competition coupled with relaxation and adventure that are a rarity in the equestrian world.

“There are very few shows that have the staying power of Lake Placid, and that’s because it’s flat-out fun,” Richter said. “They love coming to the mountains, they love coming to the town. They love the fact that it’s not just a horse show. It’s fly fishing, it’s hiking, it’s boating, it’s great restaurants, it’s camaraderie – spending time with your family. There’s so many things to do here that you don’t get the opportunity to do at other horse shows.

“Lake Placid brings a whole different perspective where it’s horses first and foremost, but it’s also just a great experience and essentially, a two-week vacation where people can relax and enjoy,” Richter continued. “To me, Lake Placid’s a giant trifecta. You have great people, you’ve got great competition and you have a great venue. It just all comes together. It’s the most popular show on earth.”