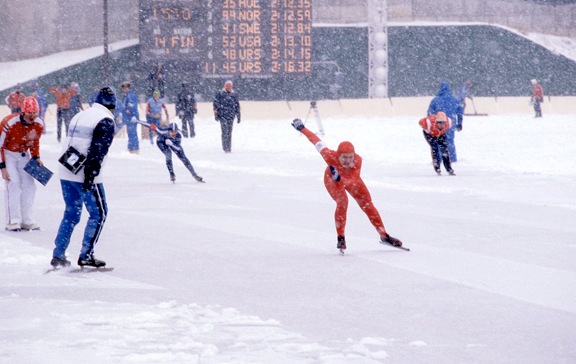 Some snow did fall during the 1980 Olympic Winter Games in Lake Placid. Shown here are athletes practicing at the Olympic Speedskating Oval. (Photo provided)

As the world’s best bobsled and skeleton athletes compete again this weekend during the IBSF World Cup races at Mount Van Hoevenberg, we continue to be in awe that this tiny Adirondack village claimed a stake in the Olympic movement for the 1932 and 1980 Olympic Winter Games and still plays host to many nations every year.

“In our fragile world, we see our shared values and principles challenged in many ways, not only in the international community but also in sport,” Bach said. “The IOC is fully committed to preserving and strengthening these values and principles of respect for the rule of law, solidarity and political neutrality. But our commitment is not enough. We depend on the support of you, the governments, for our mission and our neutrality.”

The consensus for the Olympic Truce resolution included future hosts of the Olympics, such as the winter games in Beijing, China in 2022 and summer games in Paris, France in 2024.

It’s too bad the world couldn’t practice the ancient Greek tradition of “ekecheiria” – Olympic Truce – every year. Mingling with the nation’s best bobsled/skeleton teams around the village these past two weeks, we’re reminded of that family feeling from 40 years ago when the entire world came together in peaceful competition for the 1980 Olympic Winter Games.

Peace be with you this holiday season and throughout the entire year.