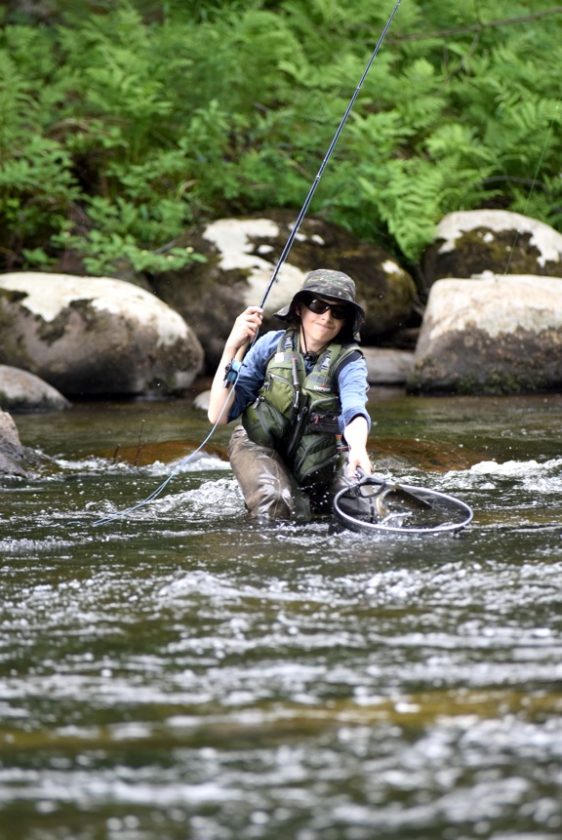 Fishing on the West Branch of the AuSable River in the town of Wilmington during the spring several years ago (News photo — Justin A. Levine)

Many anglers know that when trout streams get too warm, the fishing can go south quickly. Fish either aren’t feeding or are seemingly nowhere to be found. Trout are stressed in these hot temperatures.

In our northern climate, the air temperatures can range from 45 to 90 in a single day, as we’ve witnessed in the past few weeks. At the same time, water temperature in many of the trout rivers can fluctuate as much as 12 degrees in a day.

Recent temperature swings in the West Branch AuSable River near Monument Falls in Lake Placid ranged from 65 to 80 degrees Fahrenheit for five days in a row. This means brook, brown and rainbow trout are facing stress from low flows, high water temperature, and competition for space and food.

Trout begin to be stressed when water temperatures reach the upper 60s, so these past few weeks have been tough. Higher temperatures mean fish are lethargic. They move less, and there’s less dissolved oxygen in the water, so it’s difficult for them to breathe. That translates to moving less to save energy and not eating as much or as often.

Starting at 68 degrees Fahrenheit, their goal is to move to areas of colder water, or thermal refuge. That includes cold tributaries, big deep pools and shady areas with groundwater springs or seeps. When these areas are scarce, trout will group in large numbers and become more susceptible to predators and angling.

When the temperatures start to rise higher, feeding ceases, and to conserve energy, trout stop moving as much. If the water temperatures don’t improve, or if they cool a bit at night and heat up again the following day, such as what was seen recently in the West Branch, the compound stress can lead to starvation, organ damage and eventual death. The duration and intensity of warm temperatures and low oxygen, combined with low flows, all combine to produce stressful conditions for trout.

The Ausable River Association monitors temperatures throughout the watershed and works to identify, enhance and restore areas of thermal refuge for trout. We urge anglers to avoid fishing during these thermally stressful periods. Even if trout are handled carefully and released quickly, catch-and-release fishing during these times is stressful and possibly fatal for trout.

As an ethical angler, you’ll want to know how hot is too hot for trout fishing. Because of these compound effects, a rule of thumb is to avoid fishing when water temperatures are above 68 to 70 degrees Fahrenheit. The best tip is to carry a small pocket water thermometer with your fly box and check the water temperatures at each site before fishing. At temperatures greater than 68, consider moving to a mountain stream or pond, or even switching to fly fishing for a different species, like bass. In any temperatures, report fishkills to the DEC, use barbless hooks, and land fish quickly and with minimal handling and out-of-water time.