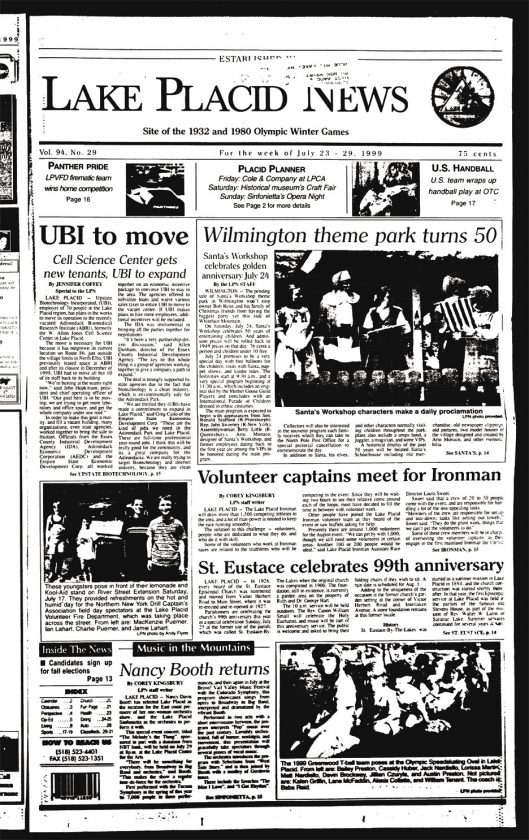 The pending sale of Santa’s Workshop theme park in Wilmington won’t stop owner Bob Reiss and his family of Christmas friends from having the biggest party yet this side of Whiteface Mountain.

On Saturday, July 24, Santa’s Workshop celebrates 50 years of entertaining children. And admission prices will be rolled back to 1949 prices on that day: 76 cents a person and children under 10 free.

The Lake Placid Ironman triathlon will draw more than 1,500 competing athletes to the area, and a lot more manpower is needed to keep the race running smoothly.

The solution to this challenge — volunteers. Presently there are around 1,000 volunteers for the August event.

Volunteer captains may be assigned to any number of duties or sites where they are needed. Some of these include the overseeing of boats, kayaks, canoes, lifeguards, the banquet area, changing tents and peelers — those who help the triathletes remove their wetsuits after the swim.

Upstate Biotechnology Incorporated, employer of 70 people in the Lake Placid region, has plans in the works to move its operation to the recently vacated Adirondack Biomedical Research Institute, formerly the W. Alton Jones Cell Science Center in Lake Placid. The move is necessary for UBI because it has outgrown its current location on Route 86, just outside the village limits in the town of North Elba. UBI previously leased space at ABRI and after its closure in December of 1998, UBI had to move all but 10 of its staff back to its building.

Mirror Lake residents Elissa and Richard Schoenlank collected for the first time in 1998 frequent water samples of Mirror Lake. They were participating in New York’s Citizen Stateside Lake Assessment Program. They are two of the more than 1,000 volunteers who have made CSLAP a model for lay monitoring programs throughout the country.

Mirror Lake appears to exhibit characteristics typical of a “classic unproductive Adirondack lake,” in many ways somewhat comparable to neighboring Lake Placid lake. It is anticipated that with additional sampling in future years a record will be built up to determine norms and fluctuations in Mirror Lake’s overall water quality character.