HISTORY IS COOL: 70 years ago 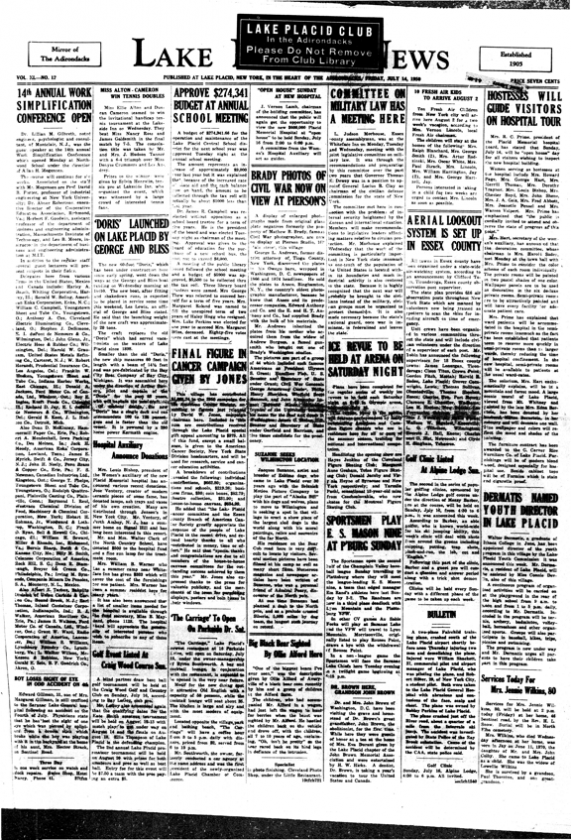 The new 60-foot “Doris,” which has been under construction here since early spring, went down the ways at the George and Bliss boat landing on Wednesday morning at 10:10. The new boat, after fitting and shakedown runs, is expected to be placed in service some time this weekend, Les Lewis, an official of George and Bliss stated. He said that the launching weight of the new craft was about 20 tons.

The craft replaces the old “Doris” which had served vacationists on the waters of Lake Placid since 1898.

Smaller than the old “Doris,” the new ship measures 60 feet in length with a beam of 14.5 feet and was prefabricated by the Bay City Boat Company of Bay City, Michigan. It was assembled here under the direction of Arthur Stevens, pilot and captain of the “Doris” for the past 48 years who will captain the new craft.

Of modern design, the new “Doris” has a single deck and can accommodate 100 to 125 passengers and is faster than the old vessel. It is powered by a 200 horse power Kermath engine.

Jacques Suzanne, artist and breeder of Eskimo dogs who came to Lake Placid over 30 years ago with the Selznick Motion Picture Company to play the part of “Alaska Bill” with his dogs and wolves, plans to move to Wilmington and is seeking a spot in that village to erect a show place of the largest sled dogs in the world along with his mural paintings, relics and souvenirs of the far North.

His residence on the Bear Cub road here is very difficult to locate by visitors. Several motion pictures have been filmed at his camp as well as many short films. Numerous magazine and newspaper articles have been written about Suzanne, who was a personal friend of Admiral Peary, discoverer of the North Pole.

At one time Suzanne had planned a dash to the North Pole and as a prelude crossed Siberia 5,000 miles by dog team, the longest such journey on record.

Motorists who like to get off the beaten track and those who want to enjoy mountain climbing without the “climbing” will find the summit of Whiteface Mountain an ideal destination.

The broad paved highway that leads to the top has an average grade of only 8% and with none exceeding 10. There are no sharp turns, “hairpins” or “corkscrews” to complicate the ascent, and even a 100-year-old car can negotiate the distance from base to peak within 20 minutes.

The ride to the summit is replete with scenic thrills. The Whiteface Mountain highway was planned and built 15 years ago with an eye to the enjoyment of beauty as well as an easy and comfortable ascent.

At various turnout vantage points on the way up the mountain, powerful telescopes can be focused on the panoramas that lie far beneath. At the top, more than 100 bodies of water can be seen, about 40 different communities, and all the most important peaks of the Adirondacks, for Whiteface stands alone among them many miles from the nearest mountain of comparable height. There are “100-mile views” in every direction.