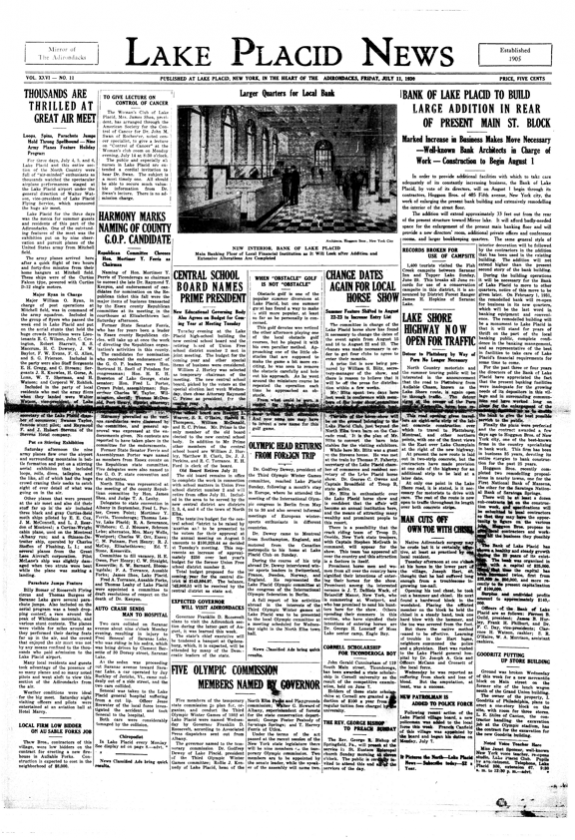 Obstacle golf is one of the popular summer diversions at Lake Placid, but one summer guest has found a way to make it still more popular, at least so far as he personally is concerned.

This golf devotee was noticed the other afternoon playing one of the local obstacle golf courses, but he played it with his own peculiar method. Approaching one of the little obstacles that are supposed to make the game a bit more exciting, he was seen to remove the obstacle carefully and hole out his approach. As he went around the miniature course he repeated the operation each time he approached an obstacle.

From what could be seen, a record for that particular course may have been broken that afternoon. And now someone may have to invent a new name for this game.

Adirondack surgery may be crude, but it is certainly effective, at least as practiced by one local resident.

Tuesday afternoon at one o’clock at his home in the lower part of the village, Joseph Hart, 40, thought that he had suffered long enough from a troublesome in-growing toe nail.

Opening his tool chest, he took out a hammer and chisel. He next found a hardwood block in the woodshed. Placing the afflicted member on the block, he held the chisel in a steady hand, took one hard blow with the hammer, and the toe was severed from the foot.

But there the native method ceased to be effective. Learning of trouble in the Hart home, neighbors summoned the police and a physician. Hart was rushed to the Lake Placid general hospital by Dr. Joseph A. Geis and officers McCann and Crosett of the local force.

Wednesday he was reported as suffering from shock and loss of blood. But the amputation, at least, was a success.

About 1,400 tourists visited the Fish Creek campsite between Saranac Inn and Tupper Lake Sunday, June 29. This breaks all June records for use of a conservation campsite in this district.

In order to provide additional facilities with which to take care adequately of its constantly increasing business, the Bank of Lake Placid, by vote of its directors, will on Aug. 1 begin through its contractors, Hoggson Bros. of 485 Fifth Ave., New York City, the work of enlarging the present bank building and extensively remodeling the interior of the street floor.

The addition will extend approximately 33 feet out from the rear of the present structure toward Mirror Lake. It will afford badly needed space for the enlargement of the present main banking floor and will provide a new directors’ room, additional private offices and conference rooms and larger bookkeeping quarters.

The same general style of interior decoration will be followed by the contractors in the addition that has been used in the existing building. The addition will not extend higher than the present second story of the bank building.