HISTORY IS COOL: 79 years ago 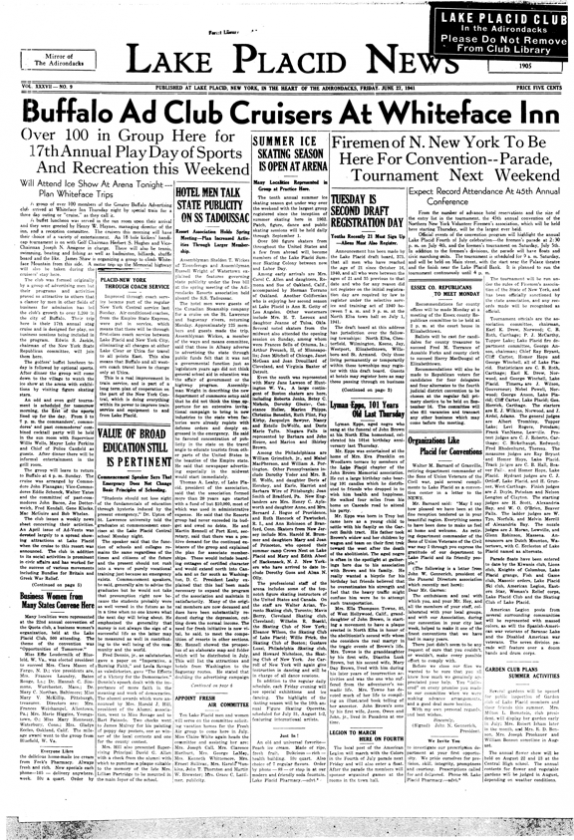 Lyman Epps, a Black man who sang at the funeral of John Brown at his North Elba homestead, celebrated his 101st birthday last Thursday.

Mr. Epps was entertained at the home of Mrs. Eva Franklin on Woodlawn terrace by members of the Lake Placid chapter of the John Brown Memorial Association. He cut a large birthday cake bearing 101 candles which he distributed to friends who dropped in to wish him health and happiness. He walked 4 miles from his home on Cascade Road to attend his party.

Mr. Epps was born in Troy but came here as a young child to settle with his family on the Gerrit Smith tract. His father took Brown’s widow and her children by wagon and team on their first trek toward the west after the death of the abolitionist.

Mr. Epps is often the spotlight at gatherings here due to his association with the Brown family. He really wanted a bicycle for his birthday, but friends believed that he overestimates his strength and feel that the heavy traffic might confuse him were he to attempt such transportation.

An interesting collection of Civil War relics is on display in the Lake Placid Pharmacy window this week. They were displayed last week for the benefit of the convention of the G.A.R. and allied organizations.

One of the most deadly and serviceable looking weapons is the “Arkansas Toothpick,” a homemade knife used in the South. A cartridge box held seven shots in each tube for the magazine in the butt. There was a cannister of grapeshot, forerunner of the modern shrapnel, a non-commissioned officer’s sword and shoulder belt, hobnailed marching boots, a knapsack worn by Rodney C. Worthing, wooden alarm rattle used by the navy, a speaking trumpet, and a bowler hat used by the soldiers which perhaps set the style for the derbies of today.

There was also a U.S. flag of 1846 bearing 28 stars, a Herald Tribune telling of Gen. Lee’s surrender, a Minie ball, bullet mold and Spencer carbine.

At the Palace Theatre

The Palace Theatre was showing matinees daily at 3 p.m. and evenings at 7:30 and 9:30. On Friday and Saturday, it was “A Woman’s Face,” starring Joan Crawford and Melvyn Douglas. Sunday through Monday, it was “They Met in Bombay,” starring Clark Gable and Rosalind Russell.

Coming July 4 and 5 was “Caught in the Draft” with Bob Hope and Dorothy Lamour, plus the Louis-Conn fight pictures, “the greatest heavyweight battle ever recorded on film.”

Bathing suits or else

If you’ve got a bubble or a fan, you can get along in Watertown. At least Sally Rand did Friday and Saturday at the Avon. But if all you’ve got is a birthday suit, that’s not so good.

A round dozen boys and young men, sweltering in the first hot spell of the season tried out the fan dance without the fan in the cooling waters of the Black River at various intervals throughout Saturday.