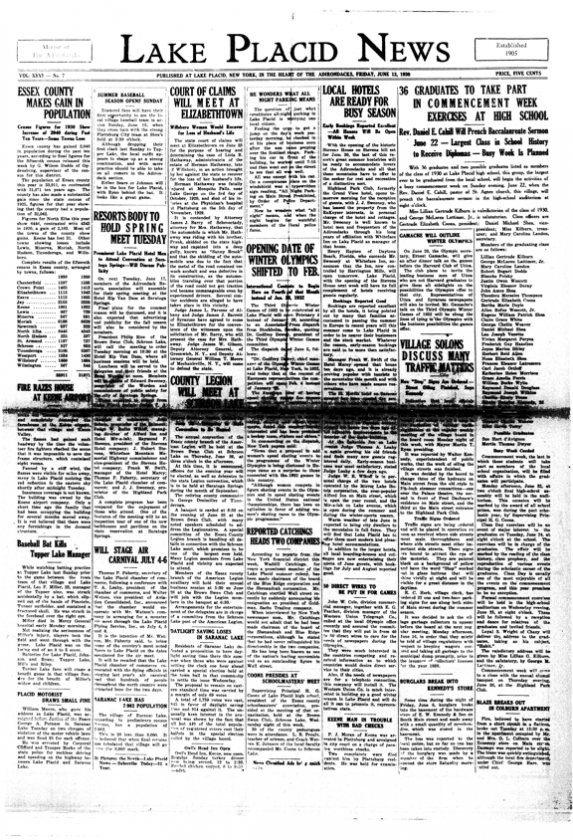 With 36 graduates and two possible graduates listed as members of the class of 1930 at the Lake Placid High School, this group, the largest ever to be graduated from the local school, will begin the activities of a busy commencement week on Sunday, June 22, when the Rev. Daniel Cahill, pastor of St. Agnes Church, will preach the baccalaureate sermon in the high school auditorium at 8 p.m.

Miss Lillian Gertrude Kilburn is the valedictorian of the class of 1930, and George McLaren Lattimer Jr. is the salutatorian.

Monday, June 23, at 2 p.m., final high school assembly will be held in the auditorium. The occasion will be marked by the award of all school prizes won during the past scholastic year.

Formal commencement exercises will be held in the high school auditorium on Wednesday, June 25 at 8 p.m. These will be followed by a reception and dance for relatives of the graduates and invited friends.

Commencement week will come to a close with the annual alumni banquet on Thursday evening, June 26, at the Highland Park Club.

The Third Olympic Winter Games of 1932 to be celebrated at Lake Placid will open on Feb. 4 instead of Jan. 28, according to an Associated Press dispatch from Stockholm, Sweden, quoting Dr. Godfrey Dewey, president of the Third Olympic Winter Games committee. Dewey also said the American idea of having women compete in speedskating events was met with “surprise” in Europe.

In commenting on the dispatch, New York papers said: “News that a proposal to add women’s speed skating events to the programme of the Winter Olympics is being discussed in Europe as a surprise to those connected with the 1932 games in this country.

While watching batting practice at Tupper Lake last Sunday prior to the game between the town team of that village and Lake Placid, Leo F. Miller, 23, manager of the Tupper Lake nine, was struck accidentally by a bat, which slipped out of the hands of Pimstein, Tupper outfielder, and sustained a fractured skull. He was struck in the forehead over the right eye.

Not realizing the seriousness of the injury, player took to the field and went through with the game. Lake Placid was on the losing end of an 8 to 5 score.

Tupper Lake fans will stage a benefit game in that village Sunday for the benefit of Miller’s widow and children.