SWIMMING IN TREES: The Kunjamuk River and Cave Hill 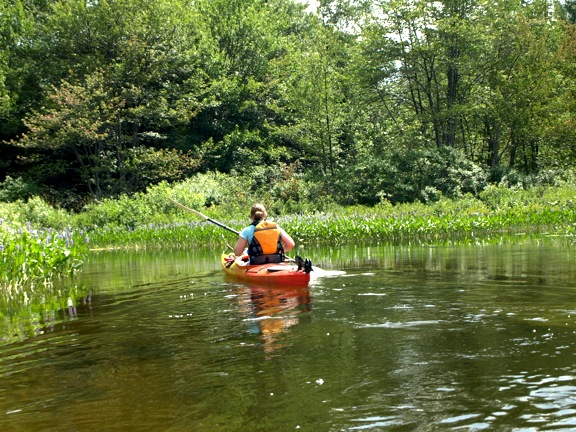 The Kunjamuk River in my opinion is one of the finest in the Adirondack Park. Not only does it open up the senses to a world beyond hiking, but it gives a unique feel of adventure as you move along the oxbows through the narrows and amongst the wildflowers.

During our most recent visit, we had the plan to check out Kunjamuk Cave, which is a short hike along an old woods road and if we were feeling up to it, maybe a short bushwhack up Cave Hill, just to see what’s up there.

We drove down one early morning to the small hamlet of Speculator and put our kayaks in at the launch in the village park on the north side of state Route 30. This launch is directly onto the Kunjamuk River. This portion of the river seemed very busy on this hot and crispy, dry day, but to be fair, many paddlers were going in the opposite direction out onto Lake Pleasant.

Heading upstream with only a faint current fighting against us, the beauty of the area started to unfold. Through the initial narrows of the river, the tall grasses started to close in and under slightly low water conditions, the bottom was unmistakably visible in spots. Rounding small corners, we eventually started floating with geese and wood ducks.

We made a very sharp turn, which headed us in the opposite direction only to swing back around toward the north again as we came into the widening of the river valley. This area, quite large in comparison, masked the small outlet we just came through. The current here was almost non-existent and felt similar to that of a small pond. We could not clearly see, but looking at our map we noticed that the Kunjamuk continued to the left and by Rift Hill directly in front of us. The current coming now was noticeable but not overwhelming by any means; once up the river a bit farther, the current again was very mellow.

The river started to oxbow, sharply at times, and at times enough to where a 15-foot kayak was a fight to get around, but we managed with a bit of persistence. The oxbows continued as the water course meandered through shores of thick alders, hardwoods and hemlocks. We made a couple “stretch our legs stops” along the way, when an attractive sandy shore allowed us to. The day was even hotter, and the comfort of shade within the trees was very welcoming, but the deer flies were vicious in their effort to hoard the river. The deer flies, once they found us relaxed on shore, quickly drove us to the water where a continual breeze was just enough to keep them at bay. Not far now from the Kunjamuk Cave Trail, we continued upstream. We passed by many more paddling groups along the way, many whom were also at the cave. Later we found out many had paddled further upstream to Elm Lake as well.

We rounded our last corner as we came to within sight of the woods road that leads to the cave; the shoreline proved to be prime real estate. Many other kayaks dotted the shore, where room was limited for easy “docking.” We found that million-dollar foot and managed to get ashore far enough to step out with our heavy legs and pull our boat out of the way. Lunch beckoned us, but now the blackflies would not leave us alone long enough to enjoy our meal. We ate on foot, on the move. The road was easy enough for our sandals and socks to be the footwear of choice for the day. Yes, we were those people.

We quickly came to the short side path to the cave, which is very odd in nature, the cave, not the trail. Manmade? Sure looks to be, but why? It was mighty cool in the cave. We could feel the brisk breeze flowing over our reddened faces, cooling us to the point where we just wanted to crawl in and nap. We then made a split-second decision not to go for Cave Hill, and then in another split-second to just go for it.

The summit was so close and really not all that much of a climb, our footwear for such an off-trail endeavor was the question. It was steep at first as we finally got out of the stinging nettles that were furious and in droves, nearly as infuriating as the insect population, but the game was on. With us in shorts and sandals the nettles put our senses into overdrive as we rushed to get out of them as fast as we could, and eventually we were above them in the hemlocks. The steepness became gradual and as it did, the logging became quite apparent. The summit was uneventful as an old skid road passed right over it. We didn’t hang out very long, just long enough to snap a couple pictures and donate to the blackfly food-bank. The hike down was more of a run, a run right back into the nettles, but it was a quick exit back to the road.

The hike back to the kayak and the paddle back out to the car was quite uneventful but much easier. The slight current meant we didn’t even have to put forth an effort, just steer. We had hopes of seeing more wildlife on the way out with coasting and less noise and we did have a dancing party with an otter before it swam briskly in front of us and disappeared into the undergrowth of speckled alder.

It felt good to get back to the car and out of the intense late spring heat, but honestly nothing a soft serve wouldn’t remedy.