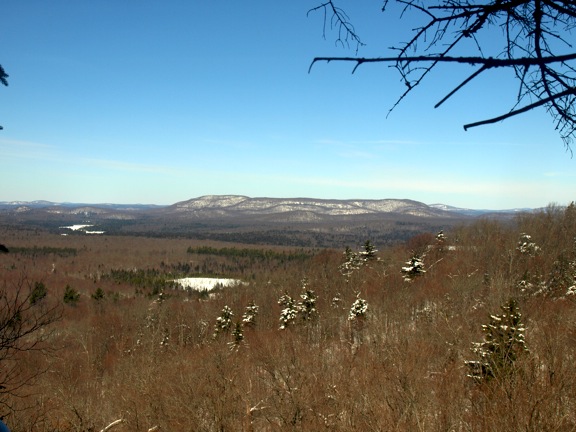 First a little background on Twin Mountain: Twin Mountain doesn’t really have an official name. However, it was given this name by the locals (I can only assume). I found this unofficially and suitably named peak in the Unit Management Plan for the Horseshoe Lake Wild Forest and it showed a proposed trail to one of its summits. That’s how it came about that I wanted to explore this little guy and see if maybe, there is a view or something up there.

It was a fairly long drive over to Route 421 that runs right through the Horseshoe Lake Wild Forest, but a nice drive. Arriving at the proposed trailhead in the UMP, it was sufficiently marked with “NO PARKING.” This parking must be a snowplow turn-around or something, so I nudged the car off the road as far as I could. I got out, turned on the GPS, got out the map of the proposed trail, tossed on my pack, and went to put on my snowshoes. My snowshoes were not there. The site of my jaw hitting the ground must have been something when I realized they were still in the back of the car I loaned my son that morning. In the winter, I rarely take out my snowshoes; I even have an extra pair in the house – I just got so comfortable with them always being in the car, my mind didn’t even decipher the fact that I wasn’t using the same car. I had just driven over an hour to get here, in a car with a wheel-bearing that sounded less than pleased, and I couldn’t even snowshoe. I drove home and pursued my dream of doing household chores for the rest of the day.

Now, my second day was much more rewarding. Not only were the skies a deep blue, but I had my car back under me and my snowshoes in the back – trust me, I made sure! In fact, I double-checked my entire gear list for the day; to be sure I didn’t forget to put on my socks. Again I drove over to the trailhead and this time I could make tracks. The night had been clear and quite cold, so it set up the snow perfectly for me to walk right on top of. Maybe my snowshoe mishap was a blessing in disguise.

Looking over the map of the proposed trail, again, I was quite surprised to find the trail was to go to a lower bump along the ridge and not to the top of Twin Mountain, but I was game, and in fact I planned to check the summits along the ridge.

Behind the parking area laid a well-developed old carriage road whose course led me through the open beauty of a new growth deciduous forest. All the stems were under 20 years old, and many were maybe even less. Yellow birch, striped maples and an occasional white pine covered the landscape, but the beech saplings mainly made their presence known by slapping my cold cheeks.

Eventually the carriage road became much fainter and turned into more of a foot path, but even that was so faint, I wasn’t sure I was even on it at times. Any sign of man, other than logging, was gone, and even that wasn’t apparent if you didn’t know what you were looking for. I now had to rely on the GPS to get me there.

The planned trail to the small summit was not developed yet, and the top of the bump could not be seen, not even though the open forest. Quickly I came upon an otter trail, run … slide, run … slide. That’s what it looked like. I only hoped I could see him or her. I didn’t see anything, even after the added effort to snowshoe over to the beaver pond it apparently lived in. I hung out for a bit but grew impatient; I guess that’s one reason I wouldn’t make a good hunter.

The climb was minor, and I stood atop the small bump, totally immersed in the trees. There was no view from here, and I even poked around to see if one existed below. I made an almost immediate heading toward Twin Mountain’s lower summit. I had to descend a bit to a small brook and make an agile hop to the opposite side before I started what was going to be a rather steep ascent.

The snow was still pretty solid under me, but occasionally with the temperatures warming up I would break through. As I climbed, the snow on the north side became even more unconsolidated, and I broke through much more often, at times well over my knees.

Abby was having a bear of a time, but she powered through with her tail wagging the entire time.

After a steep ascent, we finally stood atop the smaller northern summit of the mountain, with a decent view out over Tupper Lake through the trees. The southern and higher summit was only 0.2 miles away, and it wasn’t long before we were there standing atop a rocky knob with a decent view of Goodman Mountain and the High Peaks beyond, through the trees as well. If there were only a couple fewer trees, this would be a stellar small summit.

Now for the descent, it was fairly straight forward, but on the way in I spied what looked to be a ledge on the western side of the mountain, so I had to go for it. It was easy to find, but not as big as I thought it would be. I dropped to a lower shelf and there it was — an unobstructed view of Mount Arab. This is gold on a day where otherwise I would only have a filtered view.

Continuing down the grade to get off this peak was super steep, but the snow was deep enough to pad any planned and unplanned landings. And, with a slight crust on this side of the mountain, I could butt-slide fairly often, which as you know, turns and adult into a kid again. We literally slid off the mountain, it was that fast, and before I knew it, we were in the valley and on flat ground, where the snow firmed up once again and we could swim freely among the trees. 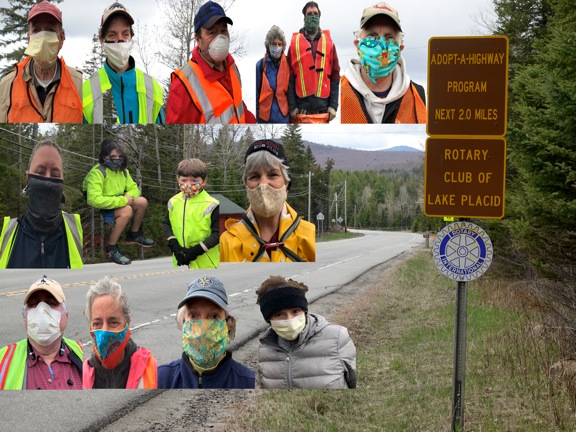 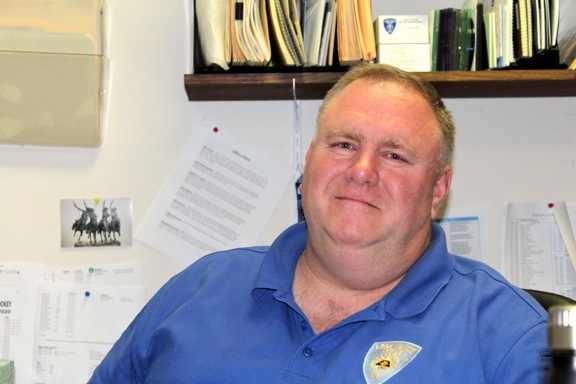