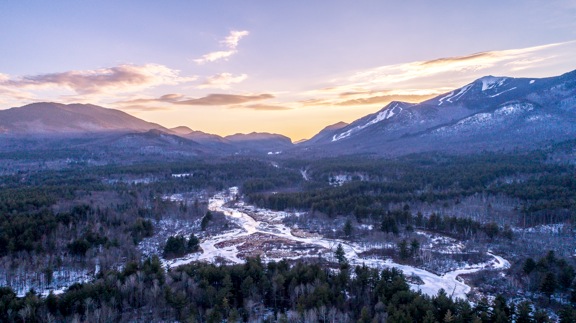 The freshwater that sustains all plant, animal, and human life — surface and groundwater — makes up less than 1% of the Earth’s water. One percent. Freshwater covers less than 0.4% of the Earth’s surface but is home to 10% of its species, including a third of all vertebrates. Watersheds are the delivery system for freshwater. They provide the water we drink, the soil in which we grow our food, the lakes and rivers we use for fishing, boating and swimming.

Natural topography defines watershed boundaries by directing water downslope. When precipitation falls, some evaporates and some soaks into the ground to replenish groundwater which, in turn, recharges streams and wetlands. The rest moves downslope: droplets join to make rills, which form small channels and, eventually, streams. Water continuously moves soils and sediments, forming and reforming streams, ponds, wetlands, lakes, and floodplains, nurturing forests and fields, and creating interconnected land and water habitats for a diversity of plants and animals, and for human communities.

For example, the small open-ended basin formed by the ridge between Mount Whitney and Cobble Hill in Lake Placid drains into Echo Pond. Water from the pond moves downslope along Echo Brook into Mirror Lake, collecting more water along the way. Mirror Lake’s small, 1.2-square-mile subwatershed is encompassed by the Chubb watershed, which, in turn, feeds the West Branch of the AuSable River, which meets the East Branch of the AuSable in AuSable Forks. The resulting 512-square-mile AuSable watershed is one of eight New York watersheds nested within the Lake Champlain Basin — an 8,234-square-mile watershed reaching into Vermont and Quebec and 19 times bigger than the lake itself. Lake Champlain’s freshwater flows into the St. Lawrence, then into the Atlantic.

On every step of this journey, freshwater nourishes and enriches ecosystems and human communities. And on every step, there are challenges to water quality, stream health, and natural flows. Runoff from homes, sidewalks, lawns, farms, industries, and roads add chemicals and nutrients. Naturally efficient river flows are interrupted by dams, water extraction, and channel armoring. Floodplains are developed or blocked, making them inaccessible during rain events — damaging stream banks and increasing threats to human communities. Invasive species, sedimentation from eroding banks, and climate change further degrade freshwater quality and its potential.

Human activities influence freshwater systems and water quality. While human activity creates challenges, we have the capacity to understand the requirements for healthy freshwater, to manage and protect it wisely. Watersheds provide a map and an organizing framework more useful than political boundaries. It’s not a new idea. Using watersheds to allocate and protect water resources dates back to 2000 BC in China. Benjamin Franklin wrote of the need for watershed management in 1790.

Locally available, sustainable freshwater is necessary for farming, fisheries and forestry; energy, manufacturing and transport; food and medicine production; flood buffering, recreation, and tourism, around the world and in our own backyard.

We can balance healthy ecological, economic, and social/cultural conditions within watersheds. Watershed-based management integrates planning for land and water. It takes into account both ground and surface water flow and plans for the interaction of water, plants, animals, and people within the physical boundaries of a watershed. And it relies on contributions from everyone.

Visit our website at ausableriver.org/caring to find out more about how you can help protect your watershed.

MARTHA SEZ: ‘Overwhelmed as I am, I love Christmas’

HISTORY IS COOL: 85 years ago

Escape from the lake - A door which had burst open after impact with a boulder was probably responsible ...

ON THE SCENE: Keene Valley church takes a sabbatical