Lake Placid’s July 4 fireworks still up in the air 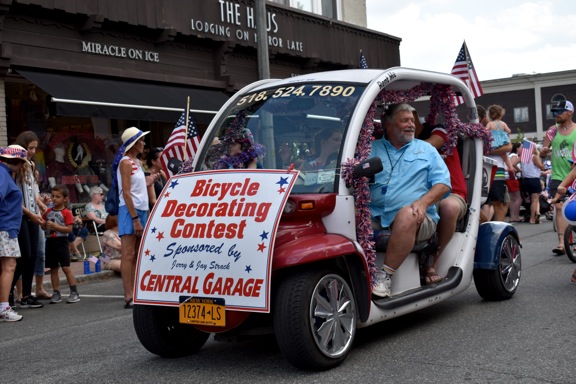 LAKE PLACID — No final decision has been made whether Lake Placid will hold its annual fireworks display over Mirror Lake.

In past years, the Fourth of July would be an all-day affair for residents and visitors in Lake Placid. Participants in the I Love New York Horse Show would attend, there would be a festive parade featuring floats and local children on decorated bicycles, and the fireworks at dusk would be orchestrated to music broadcast on the Lake Placid radio station.

Things are much different this year with the coronavirus pandemic. The horse show was canceled, as was the parade, and local officials are still waiting for guidance from the state of New York on the fireworks display, according to Jim McKenna, CEO of the Regional Office of Sustainable Tourism, which typically coordinates the Fourth of July festivities.

“It’s undecided at this time,” McKenna said Tuesday about the fireworks. “We’re hoping that guidelines from the state will be coming out this week, and that will make final decisions possible.”

McKenna said North Country regional officials are also expecting guidance from the state on the Phase 4 reopening, which could happen as soon as Friday. This last of four reopening phases includes arts, entertainment, recreation and education.

Once the fireworks event gets the OK from the state, the village of Lake Placid has to approve it, according to village Mayor Craig Randall.

“While the paperwork is sitting upstairs on the third floor (of the town hall), they hadn’t distributed it to the various departments that sign off on it,” Randall said Tuesday.

The next village board meeting is Monday — five days before the holiday — when trustees hold a public hearing on the proposed 2020-21 budget, and they could approve the fireworks at that time.

“In theory, at least, I’m hoping (village attorney) Janet (Bliss) will allow me to put that on the agenda,” Randall said.

The village office has been getting multiple phone calls each day asking whether there will be a Fourth of July fireworks display, Randall said, so he called the ROOST office in Lake Placid and asked Chief of Staff Mary Jane Lawrence what he should tell people.

“And the information she says we can offer is, we are planning to have a Fourth of July fireworks celebration,” Randall said. “However, we’re waiting on the state, who apparently is going to issue directives.”

As for a parade to celebrate the country’s independence, McKenna said there could be a scaled-down version, but nothing like people are used to seeing every year.

“There’s been talk of a people parade where people are socially distanced, wearing masks, walking around the lake,” McKenna said. “Nothing’s definite. No traditional parade is planned at this time.”

We still need governor to have emergency powers