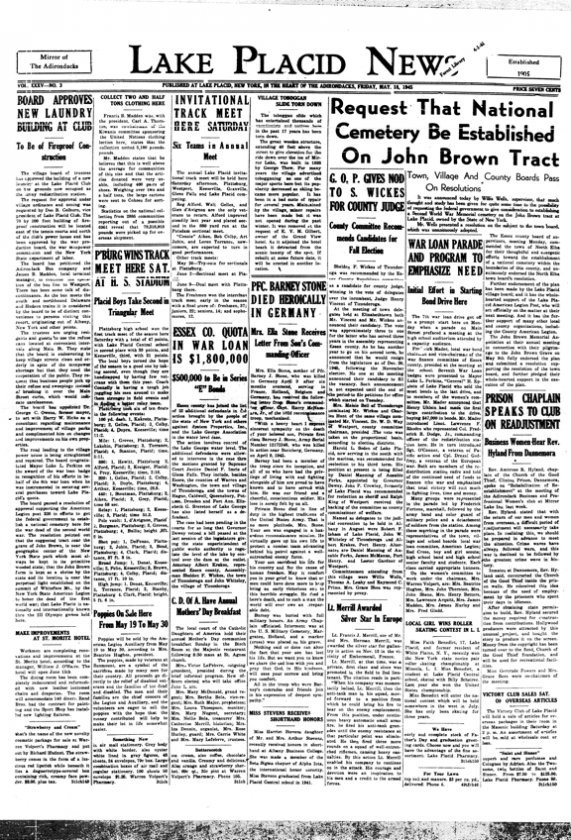 It was announced today by Willis Wells, supervisor, that much thought and study has been given for quite some time to the possibility of requesting the federal government to give consideration to establishing a Second World War memorial cemetery on the John Brown tract at Lake Placid, owned by the state.

Mr. Wells presented a resolution on the project to the town board, which was unanimously adopted.

The Essex County Board of Supervisors, meeting Monday, commended the town of North Elba for their thoughtful and energetic efforts toward the establishment of a national cemetery within the boundaries of this county, and unanimously endorsed the town’s resolution. Further endorsement of the plan has been made by the Lake Placid Village Board.

The John Brown Memorial Association, at their annual meeting in connection with their pilgrimage to the John Brown grave on May 9, fully endorsed a resolution supporting the town’s resolution.

The toboggan slide which has entertained thousands of vacationists and natives here over the past 17 years has been torn down.

The great wooden structure, extending 40 feet above the street to give elevation for the ride down over the ice of Mirror Lake, was built in 1928 by George Thew. For many years, the village advertised tobogganing as one of the major sports here but its popularity decreased as skiing became more popular.

It has been in a bad state of repair for several years. Maintained by the village, minor repairs have been made but it was not opened during the past winter.

It was removed at the request of E. V. M. Gilbert, owner of the Grand View hotel. As it adjoined the hotel beach, it detracted from the scenic beauty of the spot. If rebuilt at some future date, it will be erected in another location.

The war production board started a survey recently to determine the extent of rent increases in Saranac Lake, and similar surveys were started in Lake Placid and Plattsburgh. They are an outgrowth of complaints made by tenants against rent increases. Many requests for rent ceilings have been made.

Complaints were received from soldiers on rents being charged in Lake Placid and Plattsburgh, but it is not known if the army has made its own investigations. The officers in charge of the redistribution station here took action against other types of overcharging and some places were declared out of bounds as a result.

The Marine was well known in the village having been on the hockey team here for three years and on the Colgate University team, which played for a number of years in the Lake Placid Club tournament.

Cpl. Arrowsmith graduated from Northwood School in 1941 and Colgate University in 1944. 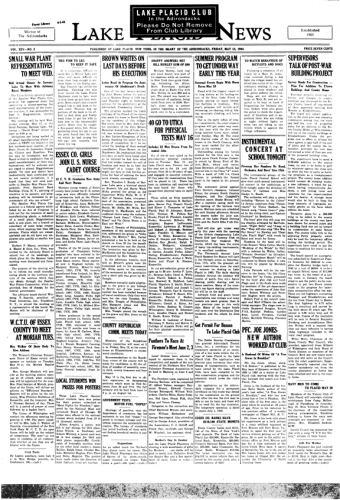