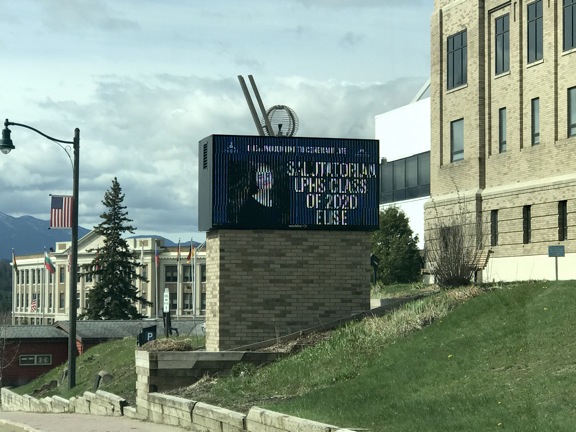 On Sunday, May 17, the state Olympic Regional Development Authority began showing slides of LPHS graduates on the Main Street marquee in front of the Olympic Center. There will be roughly 14 students each week with a new batch starting every Sunday. (News photo — Andy Flynn)

Lawn signs dot the front yards of local high school seniors, some schools are planning parades, and the Class of 2020 is preparing for what will surely be unique commencement ceremonies.

Saranac Lake High School has announced that each student’s commencement will be recorded separately. Lake Placid High School is working on a drive-through car parade on the Olympic Speedskating Oval. Tupper Lake, Keene and AuSable Valley high schools are still working on the details of their ceremonies and aren’t yet ready to announce them.

Lake Placid High School Principal Tammy Casey said the ceremony will be held at the speedskating oval, where it usually is, but instead of lines of chairs, the oval will be filled with lines of cars.

Casey said district officials are still in the planning phase, but they expect to have a drive-in-style event at the oval, with a stage and a screen from Good Guy Productions.

She said officials have been trying to keep the ceremony as traditional as possible for the 45 seniors, working with local officials to make sure their drive-in graduation plans will work with the local health guidelines.

Casey said she has been consulting with the senior class officers and advisers, who said the biggest things they wanted was to have a ceremony, to see each other again and to have a slide show.

Casey said the three ceremonies the district holds each year — senior award night, the baccalaureate ceremony and graduation — are being combined into one, at which students getting scholarships will be recognized, a slide show will be presented and students will get their diplomas.

Casey said usually on the last day of classes, students would run through the halls and then drive around Mirror Lake, so instead the students are organizing a senior parade on June 12, working with the police and fire departments to set up a similar parade route. Starting at 2 p.m., seniors will parade from the North Elba Show Grounds, up Sentinel Road to Main Street, behind the high school, and continue along Main Street to Saranac Avenue, where they will end at the ‘dack Shack. Community members are encouraged to line the streets and cheer for the students — make signs, honk horns and ring cowbells.

On Sunday, May 17, the state Olympic Regional Development Authority began showing slides of LPHS graduates on the Main Street marquee in front of the Olympic Center. There will be roughly 14 students each week with a new batch starting every Sunday.

Casey said in the first week of June, the district will deliver lawn signs, caps, gowns and gifts to seniors, including face masks in school colors, blue and gold.

Saranac Lake High School Principal Josh Dann announced this district’s graduation plans Monday, May 18, describing a series of events that has already been put into action.

On May 5, school administrators drove around to each senior’s home and delivered lawn signs with photos and names of graduates on them. Helena Dramm, a junior, was there to film each stop, and a video of the day was uploaded to Dann’s YouTube account.

On May 28, from 6 to 7:30 p.m., students are asked to dress and decorate their cars in the school colors of red and white for a senior drive-thru and pick-up parade. Dann said as many family members as can safely fit in a car can join and show Red Storm pride as seniors pick up their yearbooks, caps and gowns, and senior gifts. Faculty, staff, the Saranac Lake Police Department, state troopers and fire departments will also be there to cheer for the seniors, who number around 89.

“The esteemed graduate should ride in the passenger seat and wear a mask,” Dann wrote in an email. “Staff will maintain social distance, wearing masks and gloves as they distribute items. All family members must stay in the car at all times.”

For commencement, Good Guy Productions will individually record each student’s participation in early June for a compilation video to be shown on graduation day, June 26.

“I’m hoping that when you watch the recorded graduation it looks about the same as if you had seen it live,” Dann said.

From June 1 to 12, each senior will be scheduled at 15-minute intervals to come in, walk across the stage, receive their diploma covers and move their tassels, before taking photos with family.

“That’s right, family members, come dressed to be in graduation pictures,” Dann wrote. “We are pleased to provide an opportunity for families to continue the celebration outside at our picnic tables with light refreshments (weather permitting).”

Students will be able to walk through the halls of the school one last time with their family as they make their way to a commencement stage in the gymnasium.

Dann said in his discussions with students, they were insistent that walking the stage was a very important part of graduation to them, and the recordings are a way to do that while social distancing.

On June 26, Dann said the district has not yet finalized how the viewing of the recorded graduation will work.

“We will make a decision based on the very latest guidelines and protocols for safety provided by state officials,” Dann wrote. “By waiting, we will be able to determine the best possible graduation viewing option.”

Superintendent Seth McGowan said the Tupper Lake Central School District wants to keep its ceremony as close to normal as possible, but “anything can happen” before it makes its final decision.

McGowan said the only thing the district knows for sure is that its senior class of 50 will graduate June 26 with as special a ceremony as is safely possible.