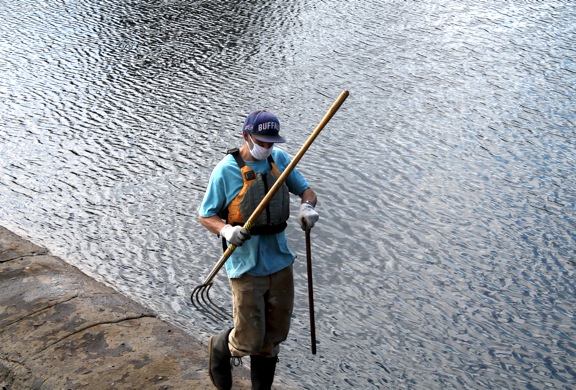 At 38, Wilmington native John Langford understands the general operations of the town of Wilmington.

He should — he has worked for the community since he was 15 years old.

As a teenager, John worked for the Parks Department during his summer vacations. His mentor, Greg Winch Sr., helped train him for what would become John’s full-time occupation.

John explains that his former boss took him under his wing and consistently reminded the young man that there was “a powerful amount of work to do.”

Work is something John is not afraid of.

As an adult, John has now worked full time for the town for approximately nine years. He has Greg’s old job and is responsible for our community’s parks, our beach, our cemeteries and just about every other public space owned by the town that a resident or visitor may see.

From flower planters to streetlight banners, John is the main man when it comes to getting the job done.

His work ethic and attitude are truly impressive.

John is also very committed to accomplishing his goals outside of his workday.

When John’s son was born, John began a lifestyle change that eventually resulted in two marathons, two half-marathons, and several other long races.

(Just a reminder: A full marathon is a total of 26.2 miles of running or jogging.) It is common for him to log more than 50 miles a week as part of his training routine.

John’s family heritage goes back several generations in our community.

The home of his youth and some of his adult life is one of the oldest homes in the town of Wilmington.

Situated on the corner of Haselton Road and state Route 86, across from the Whiteface Community United Methodist Church, the home dates back to 1793 (although other records suggest that it was built more recently: in 1812).

The house John grew up in served as a post office and as a tavern over the years. It was once known as the Stagecoach Inn. It was also possibly part of the underground network used to help free slaves in the years before the Civil War.

Rumors have persisted for many, many years of underground passages between the nearby Methodist Church and John’s childhood home.

In 2012, John married his wife, Amy. Her family also goes back generations in Wilmington, on the Winch side of her family tree. They have one son, Brody.

There is no doubt that John is focused on his family and their happiness.

Even with his commitment to his wife and son, John still finds time for his other interests, which, in addition to running, include snowboarding, fishing, playing poker with friends, bee keeping, and growing vegetables.

There is a sincerity found in John that balances out his sense of humor with his commitment to working for the citizens of our community.

He takes his responsibilities seriously, and he leads through his actions.

John Langford is the perfect example of the Wilmington Way.

(Roy Holzer is the town of Wilmington supervisor)