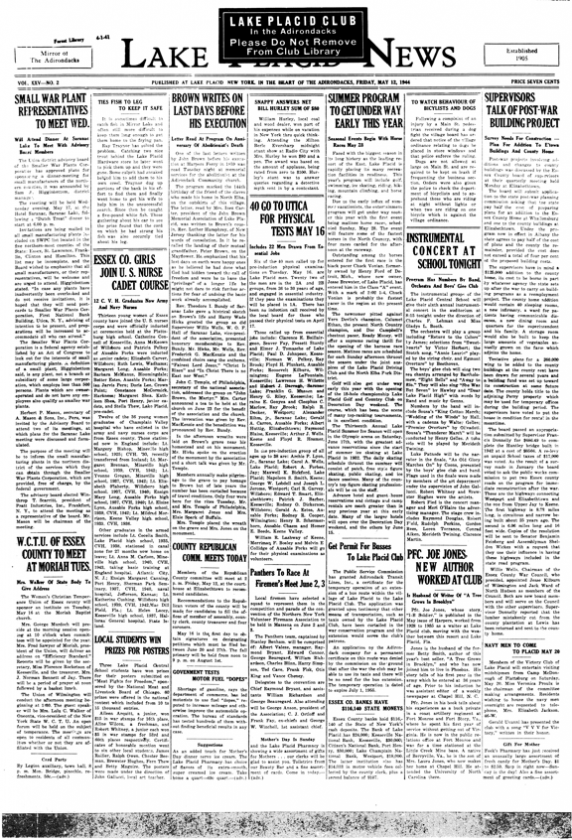 It is sometimes difficult to catch fish in Mirror Lake and more difficult to keep them long enough to get them home to the frying pan.

Ray Traynor has solved the problem. Catching two nice trout behind the Lake Placid Hardware store, he later went to pick them up and they were gone. Some culprit had sneaked behind him to add them to his own creel. Traynor dug up portions of the bank in his effort to find them and went home to get his wife to help him in the unsuccessful search.

Since then, he caught a 5-pound white fish. Those gathering about his car to see the prize found that the cord on which he had strung his fish was also securely tied about his leg.

Faced with the biggest season in its long history as the leading resort of the East, Lake Placid is rapidly placing its many recreation facilities in readiness. This year’s program will include golf, swimming, ice skating, riding, hiking, mountain climbing and horse racing.

Due to the early influx of summer vacationists, the entertainment program will get underway sooner this year with the first event being matinee horse races, scheduled Sunday, May 28. The event will feature some of the fastest horses in the North Country, with four races carded for the afternoon at the raceway.

Golf will get underway early with the opening of the 18-hole championship Lake Placid Golf and Country Club on Decoration Day weekend. The course is in excellent condition.

The 13th annual Lake Placid Summer Ice Season will open in the Olympic Arena on Saturday, June 17, with the greatest advance reservations since the start of summer ice skating at Lake Placid in 1932. The daily skating schedule throughout the summer will consist of patch, freestyle figure skating, public skating and ice dancing sessions.

Advance hotel and guest house reservations and cottage and camp rentals are much greater than in any previous year at this early date. Many of the larger hotels will open over the Decoration Day weekend, and the others by June 15.

Mr. and Mrs. Darwin Whitman’s son, Lt. Wallace Whitman, was shot down in a Flying Fortress over Germany early in February and he and his fellow crewmen floated down via parachutes. He is now a prisoner of war.

Supplementing word from the department of war that he was alive and in a German prison camp, have come many messages from America’s short wave radio fans. To date, the Whitmans in Potsdam have received two telegrams, 15 postals and six letters from these people, messages which bore word that each fan had picked up short wave broadcasts from Berlin announcing “Lt. Wallace Whitman No. 0-670308 was held a prisoner of war.”

Those messages from strangers bear testimony of the hundreds of radio amateurs who are busy all over America snatching similar messages out of the air and then relaying them, at their own expense, to parents and loved ones whose boys have been shot down, and are held prisoner.