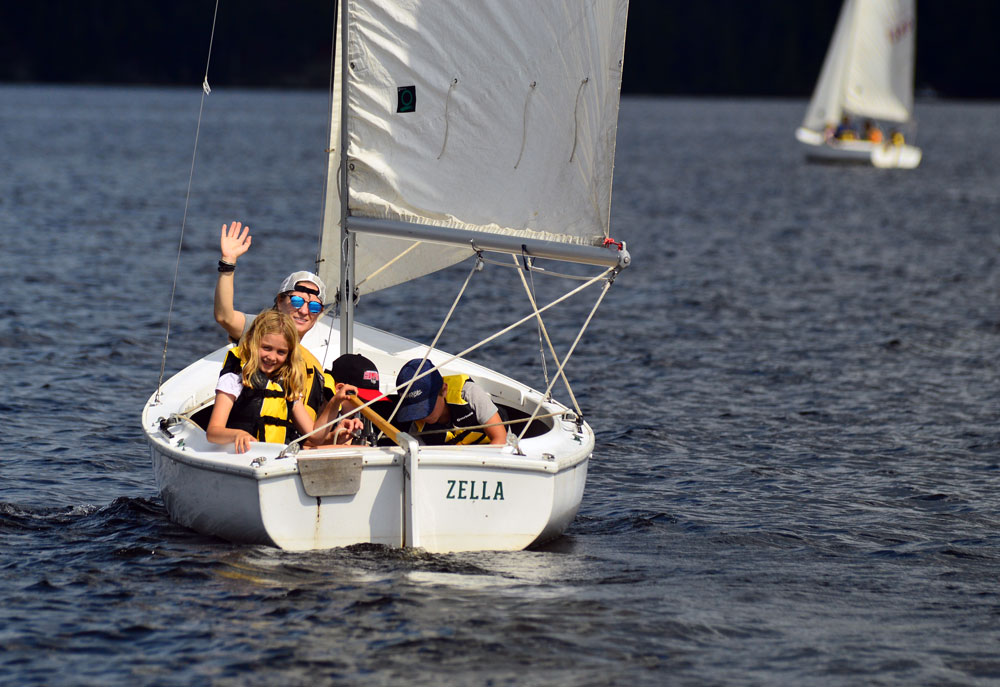 Eagle Island campers and an instructor wave from a sailboat the kids learned to maneuver while at camp in July 2019. (News photo — Aaron Cerbone)

SARANAC LAKE — The Eagle Island Camp Board of Directors has decided not to hold summer camp activities this year, saying it could not find a “safe and permissible way” to run programming amid the coronavirus pandemic.

“We are saddened to share that, after lengthy deliberation, the Board of Directors has determined that we must suspend plans to host programming on Eagle Island this summer,” Camp Director Katrina Dearden and Executive Director Paula Michelsen wrote in a message addressed to their “camp family.” “We understand how disappointing this must be to our Eagle Island family. Know that this decision was not an easy one.”

They said they sought guidance from the American Camp Association, the U.S. Centers for Disease Control and New York state, as well as consulting with the broader camping community.

“For many months, we have been looking forward to welcoming back our day campers and hosting overnight campers for the first time in over a decade,” Dearden and Michelsen wrote.

They said the camp will issue refunds for 2020 tuition within two weeks, or campers can opt to use the funds as a deposit for future programs. They said the island in Upper Saranac Lake may be able to open to new or modified programs later in the summer or fall.

“Whether this summer would have been your first time on Eagle Island or you have already experienced the wind in your sails, the view from the Lodge porch and the smell of the pines from Mariner Rock, you are part of this community and camp is always with you, whether you are on the Island or not,” Dearden and Michelsen wrote. “We now have the opportunity to keep that Island feeling alive, from our own homes, in our neighborhoods, and around the world.”

Dearden and Michelsen said they are working on developing alternative programming — virtual programs and programs by mail — for all registered campers and included a survey so parents could give their input and ideas.

Other camps have already halted their summer season include Camp Guggenheim in Saranac Lake, run by the Roman Catholic Diocese of Ogdensburg, and Camps Dudley (for boys) and Kiniya (for girls) in Westport, on the shore of Lake Champlain. Clarkson University has said it aims to go online instead with its academic camps, such as Horizons and Young Scholars, but keep its sports camps in-person.

Other North Country summer camps are waiting for New York leaders to make the call. Gov. Andrew Cuomo has said summer camps can open when their regions reopen.