SWIMMING THROUGH TREES: Hiking the Pisgahs and a pond 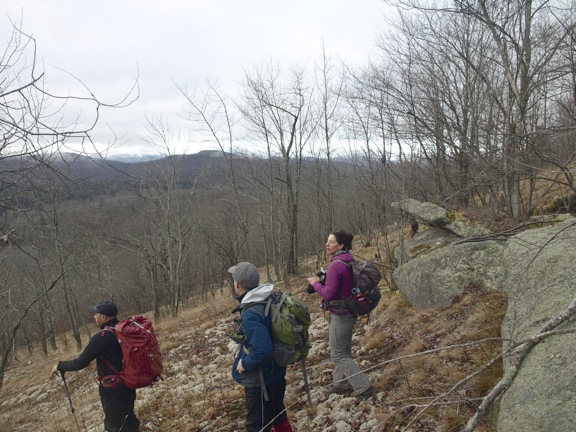 Ever since the state obtained the Pisgah Mountains they have become a welcome part of the Hudson Gorge Primitive Area.

Big Pisgah Mountain has been a popular destination for quite some time now, even before it was in the Forest Preserve but what I was unclear on was what would Little Pisgah offer, no one talks about Little Pisgah. Springtime seemed to be a good time to go back and visit.

The property at the end of Chain Lake Road was formally on private land and managed by the Gooley Hunting Club, but since the state bought the land it is now open for public use. The outer gate was closed on this day due to muddy conditions, so we had a bit more road hiking to do, which added all of about a mile to the round-trip hike; we managed to survive this added pressure. The road passed before us very quickly, and soon we were at the inner gate near the old Outer Gooley lodge. The lodge is in need of some serious love and may not be long for this earth, but it sure does sit in an amazing location overlooking the river.

The second gate is the official trailhead for most of the year; we signed into the trail register and continued our commute on the woods road but we would not have to travel that much further on the gravel trail.

Once we arrived at the height of land along the road, we found a nice area to step off into the wilderness. The day was still overcast with the slight hopes of the sun being able to burn through the moist air, but it didn’t look promising at this point in the morning.

With Big Pisgah first on our list, we wouldn’t be pressed too hard by difficulties as it sits a mere 2,100 feet in elevation. That means we only needed to best a few hundred feet of tangible climbing. This was new territory for a couple of us, and their mouths whet from the anticipation. In fact we didn’t even need to wait that long, the rewards started to arrive well before the open summit area. Sporadic trees dotted the open landscape of sedge and rock; a cool, crisp breeze moaned through the branches and drifted some light snow in the air around us. We could see many small mountains just below the clouds, but they were quickly being swallowed by the incoming weather. We would be the next course.

The views kept getting better and better as we moved ever so close to the true summit. The open landscape wrapped its way around the mountain gaining us different views to where we eventually could see the shoulder of Little Pisgah and the much larger Cedar Mountain just beyond. Blue Mountain was cut in half by the clouds and the High Peaks were nowhere in sight. The summit is partially wooded but there is no need to fuss over such trivial facts, it is still a gem in the rough, and the summit is just logistics.

Next we took a heading toward Little Pisgah Mountain, the destination of curiosity. The descent was an easy one, and one of very little change in elevation, we were OK with that. We reached the saddle between the two in no time flat and happened upon an old trail that seemed to pass right through to an unknown destination, the Hudson, perhaps?

This side of Little Pisgah was obviously timber harvested, but done in a very respectable manner; so little slash remained. This opened up the already clear hardwood forest, and we could see the summit of Little Pisgah standing somewhat tall above us. The summit of this smaller version of the last was also grassy and moss covered but much flatter topped. Residing on the highest point was a survey marker and a deer shed, and with a bit of looking around we found two other triangulation markers. While the summit itself offered limited views, the open patches below offered us more. Now looking west to southwest, we put Mud Pond in our crosshairs as the next destination, as an added bonus on the exit.

The descent was filled with small boulders and loose rock that were covered in decades of moss and leaf litter. It was one hole after another, and they went unnoticed until one leg punched through peeling back the chin skin creating an instant urban dictionary rant of made up curse words, like a new language yet to be developed, but we all understood the meaning. It was slow going to say the least and add to the torture, the wet rotting leaves of past autumn. Once back on the forest road, we took a right for a bit to get to the south end of Mud Pond. We could not see it very well from the road, so we ventured out onto the grassy shore. Boggy, wet and unstable beneath us, we walked with care and precision. We reached open water but not before we snapped dozens of photos of the grandeur before us. What a beautiful location we were in amongst the rue and pitcher plants. A beaver had made his home just off shore. He surely knew that he had it made with his great camp of white birch and mud.

Back on the road once again, we had time for one more jaunt. This time completely off the cuff, we would check out Clear Pond. The trail was on the way out and near where we started our adventure up Big Pisgah. The trail is marked and signed, and was quite easy and in no time at all we were at the shore near the outlet of the pond. Sharp cliffs dropped into the clear waters and other rocks seemed to float along shore in the crisp, clear waters.

Clear Pond was the end of our day, and we started our march back to the car. It was an easy stroll, one filled with chatter and talk of another adventure. Maybe it would be Cedar Mountain or the nearby Bad Luck Mountain, but one thing for sure is it would be just that, an adventure.