HISTORY IS COOL: 102 years ago 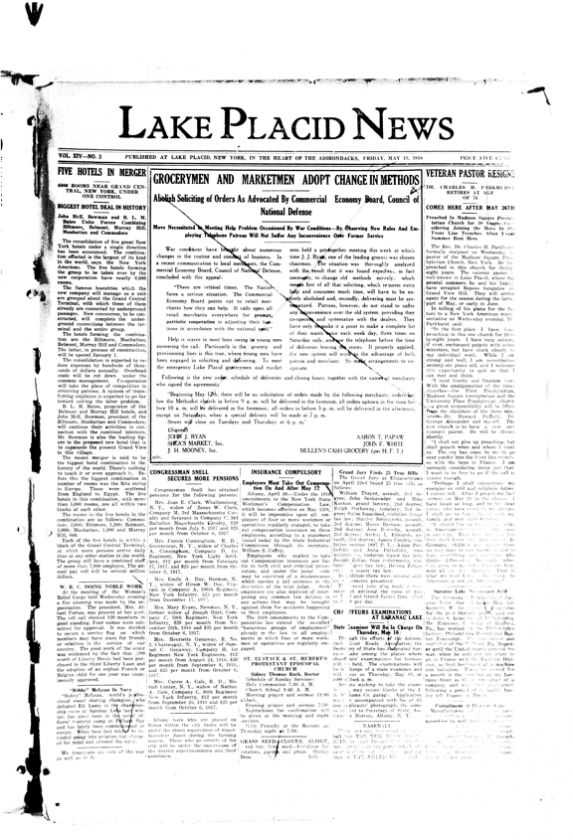 War conditions have brought about numerous changes in the routine and conduct of business. In a recent communication to local merchants, the Commercial Economy Board, Council of National Defense, concluded with this appeal:

“These are critical times. The nation faces a serious situation. The Commercial Economy Board points out to retail merchants how they can help. It calls upon all retail merchants everywhere for prompt patriotic cooperation in adjusting their business in accordance with the national need.”

Help is scarce in most lines owing to young men answering the call. Particularly in the grocery and provisioning lines is this true, where young men have been engaged in soliciting and delivering. To meet the emergency, Lake Placid grocerymen and marketmen held a get-together meeting this week at which time J. J. Ryan, one of the leading grocers, was chosen chairman.

The situation was thoroughly analyzed with the result that it was found expedient, in fact necessary, to change old methods entirely; which means first of all that soliciting, which requires extra help and consumes much time, will have to be entirely abolished and, secondly, delivering must be systemized.

Patrons, however, do not stand to suffer any inconvenience over the old system, providing they cooperate and systemize with the dealers. They have only to make it a point to make a complete list of their wants twice each week day, three times on Saturday only, and use the telephone before the time of deliveries leaving the stores.

If properly applied, the new system will work to the advantage of both patron and merchant. So make arrangements to cooperate.

Following is the new order, schedule of deliveries and closing hours, together with the names of merchants who signed the agreement:

“Stores will close on Tuesdays and Thursdays at 6 p.m.”

The consolidation of five great New York hotels under a single direction has been announced. The combination effected is the largest of its kind in the world, says the New York American. The five hotels have nearly 6,000 rooms.

The famous hostelries which the new company will manage as a unit are grouped about the Grand Central Terminal, with which three of them already are connected by underground passages.

The hotels forming the combination are the Biltmore, Manhattan, Belmont, Murray Hill and Commodore. The latter, in process of construction, will open Jan. 1.