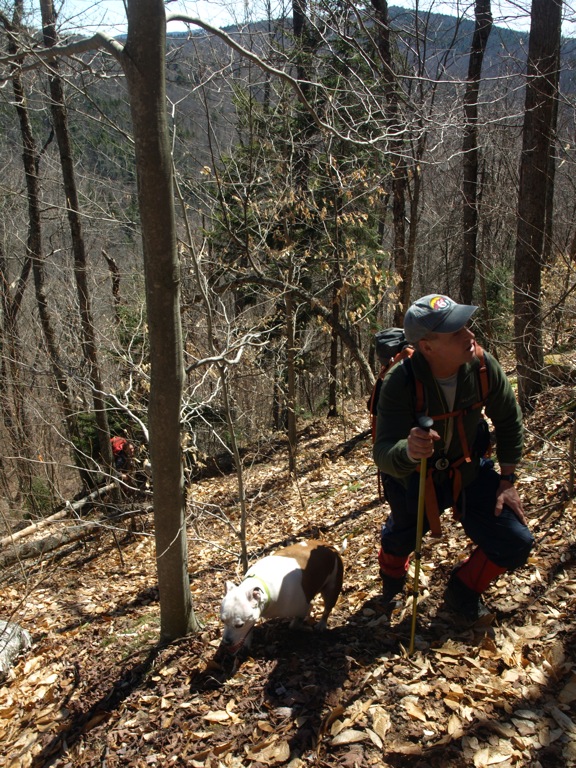 I recently took a spring trek up Moxham Mountain, and because of that hike, I got the idea to see what else this region’s mountains have to offer. We had this plan to do a two-car traverse through an area none of us were familiar with but decided on doing that on a different trip and Kellogg on its own.

We drove down the Northwoods Club Road to a very deep col between Venison and Kellogg mountains to park to start the hike. That was a spring adventure in itself, trying to avoid a sinking feeling in the softening mud layers. We found a spot near the culvert for Bullhead Brook, which had become a river with all the snowmelt during the recent weeks of warmer weather and rainfall.

We were now looking up at Kellogg Mountain; it towered above us. The steep slopes came right down to the road. There would be NO warm-up for our weary legs. We figured it to be a 500-foot climb in less than a quarter of a mile. (I told you it was a shorty.) I figured it would be a bit longer than that considering our measurements are a straight line from point A to B. It was going to be steep and relentless, but we had plenty of time.

We meandered about like a century-old riverbed, looking for the best footing to avoid slipping and sliding on the slightly frozen and slightly muddied leaf-covered soil.

We came across a flagged route up the mountain, unsure of its purpose or destination, or even if it truly was a route. We followed it as it took a fall-line approach to the summit. As we neared the apex of the hillside, we had to do a bit of hand-over-hand scrambling with small saplings as our support group.

I was thankful for their diligence. We didn’t see too much promise here on this 2,100-foot peak, but we were still hopeful. We didn’t give up and kept poking around the steep slopes. The true summit had slight views through the leafless trees, but as soon as they blossomed the views would be gone. Hopefully we would be gone before that happened. Jim and I had to poke around some more.

We wanted to locate some sort of a view off to the High Peaks that we knew were near. And then, there it was. We found a small open slope where we could see the entire Upper Great Range from Marcy to Gothics and even the jagged teeth of Sawteeth cutting into the blue sky. We spotted the entire MacIntyre Range, and then in the other direction was the Dix Range.

Sure they were off in the distance, but we could find them all and still quite snow-covered. We must have camped out here for 20 minutes, or at least until the chilly spring breeze pushed us on what a sobering note to a wonderful day that was.

But what comes at the end of a day are the ideas that flow for the next trip into the wilderness. Who knows where I will be, but I assure you it will be some remote peak nestled away in the wonders of our beloved park.