SWIMMING THROUGH TREES: Another day, another quick adventure near Newcomb 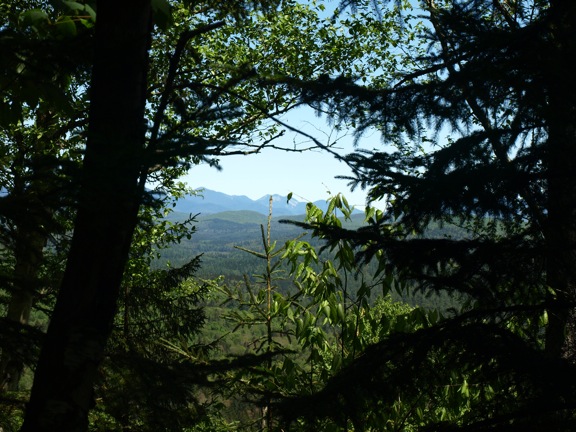 The Adirondacks are just peppered with “Buck Mountains,” and “Buck Hills,” and today’s short stroll was one that I had not yet visited. It was one of those hectic days where I only had a few hours to get in some fun and adventure before I had to get back to the daily grind.

The access road, also called Moose Pond Road, was in OK condition — at best. My low clearance vehicle had to maneuver around the higher exposed rocks with care as to not rip off what’s left of the muffler. I located a starting point along the road, almost directly north of the mountain, where there just so happened to be a parking spot for one car. Located at the back of this parking location was an old trail, slightly messed up from deadfall, but easy to see and follow. I figured I could use this, what I assumed was an old fisherman’s trail. It didn’t lead me in the right direction, but it did get me along the brook to a nice location where I could easily cross it. Several decent-sized boulders, lined up perfectly across the babbling brook, aided my crossing immensely. The sun beaming down on the green brook moss made for a glorious early morning atmosphere.

I was now in the wilds of the Adirondacks and was at the base of this particular Buck Mountain. A bit of scratchy balsams blocked my quick passage, but for only a couple hundred feet before the hardwood forest opened up the world in front of me. The forest floor was lined with Dutchman’s breeches, not yet flowered, and Canada lilies also waiting to do the same. It was like this mountain was still waiting for spring and the wildflowers were still a bit behind. The forest remained very open and then came the steep slopes of the mountain, which I could see on the map and hoped would create some views. The scattering of duff-covered rocks gave me a landmine of deep holes and loose rocks, but the steep slopes never gave me more than a glimpse through the trees.

I could see a bit to my right that there might be possible viewing areas, but I decided that I would summit first. The top was what appeared to be a small cleared mound. “Do others climb up here?” I wondered. I wasn’t so convinced, but the summit was a bit odd. It was time to check out the steep slopes a bit more to the west. I worked my way down to them, but the slopes, while steep, still offered no views over the much taller trees. Peek-a-boo views existed through the leaves and as I made my way along the steeper slopes I got decent glimpses of Vanderwhacker Mountain and eventually the High Peaks.

I was intrigued and convinced that I would get a view, so I stayed atop the cliffs and worked my way around. Up and down over the contours I eventually found myself back just below the summit, I had made a complete loop almost all the way around the summit cone. But, to no avail. Alas, I started my descent. Staying on the same course as my route up, the descent was flawless and I popped out right at the brook crossing I found on the way in.

It was short, and it was good. Would Buck Mountain make the cut of best views in the region? Probably not, but it was a fun little adventure and you never know what’s up there unless you go find out and seek out the unknown.