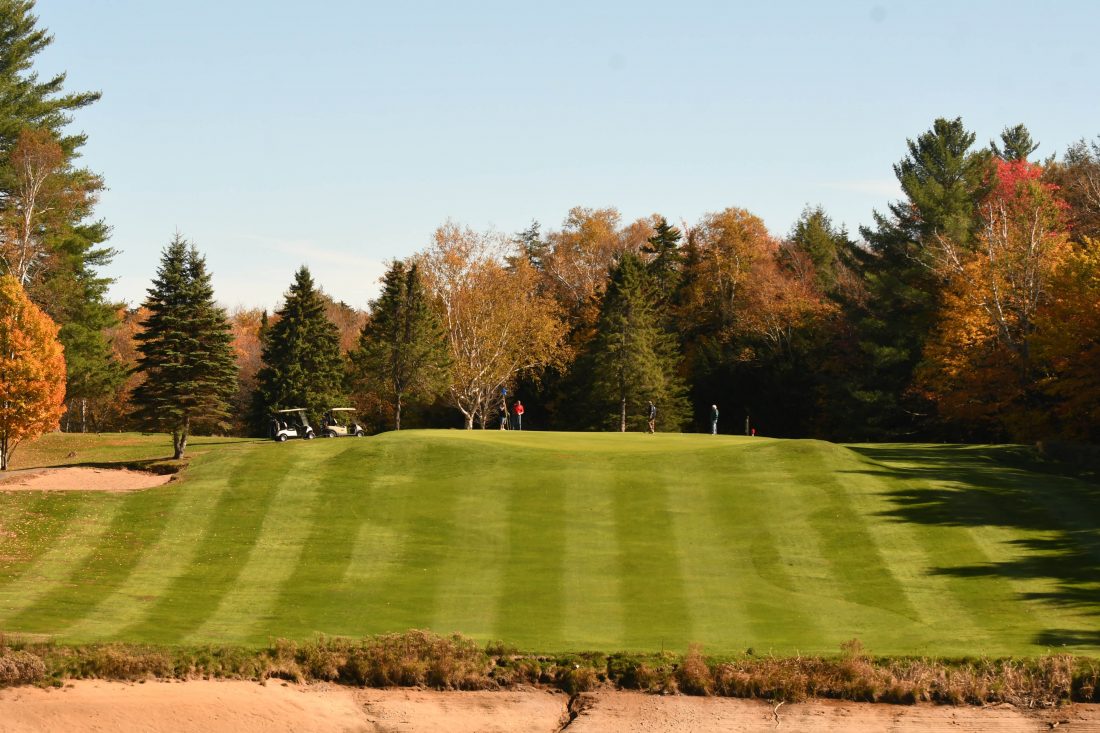 Golfers play on the 16th hole at Saranac Inn in October 2019 on the final day of the season at that course. Saranac Inn owner Jim Connors said he hopes the course will be open to the public this weekend and noted it will follow all precautions to help prevent the spread of the coronavirus. (News photo — Lou Reuter)

SARANAC LAKE — After being ordered closed earlier this month, golf courses across New York state are permitted to reopen.

In warmer parts of the state, many courses had already opened for the season before the coronavirus pandemic began sweeping across New York and the nation. As a result of the New York State On Pause regulations to battle the pandemic, courses were originally deemed non-essential businesses on the Empire State Development list and were closed on April 9.

Courses across the state are still considered non-essential, but the state updated its ruling on Friday, April 17, saying they can open back up, under strict policies to help prevent the spread of the virus.

Included in the measures are clubhouses, pro shops and bathrooms will be closed, and the only workers allowed at courses will be involved with security and maintenance duties. They will not be permitted to collect greens fees from golfers, which will basically result in that money being paid on line, or in some cases, players can place money in some type of drop box.

In addition, motorized carts will not be in use and flags can not be removed from the holes during play. Many courses have or plan to adjust the holes to prevent golfers from having to reach to the bottom of the cup to remove their ball.

All those adaptations are part of the social distancing policy, which also asks golfers to remain at least 6 feet apart and refrain from gathering in groups.

With the latest announcement, many courses in the area either opened or began preparations to open.

Ian Breen, who coaches the Saranac Lake High School team and works at the Whiteface Club course in Lake Placid, said he played a round of golf Saturday, April 18 at Bluff Point in Plattsburgh. Breen said he saw about 30 golfers at the course during his round, and noted that Bluff Point has a payment box where golfers drop their $25 greens fee into.

“Golf is very doable if certain guidelines are followed, and right now, everybody is walking,” Breen said, adding that the Whiteface Club is expecting to open soon for golf.

Jim Connors, who owns the Saranac Inn Golf Club, hopes his course will be able to open by this weekend, depending on the weather.

Connors, who has been constantly tracking updates on the golf industry both statewide and nationally, said he received an email on April 17 from the New York State Golf Association regarding courses opening up for business for the season.

“The email listed the restrictions, so we’re going to follow every guideline and be strict about it,” Connors said Sunday, April 19. “If everything goes right, we’ll be open this weekend.”

Connors said he is in the process of figuring out the payment system for golfers.

The Saranac Lake Golf Club, a nine-hole course in Ray Brook, has already opened its driving range and plans to have its layout ready to go on May 1. On its Facebook page, the club said it’s cleaning the ball dispensing machine and tokens at the range once a day, but suggested range-goers bring their own disinfecting products for extra protection.

Evan LaBarge, director of golf at the Tupper Lake Country Club, said he was thrilled to hear the news and stated the 18-hole course was slated to open Monday, April 20. He said this week will be cash only for golfers with a drop box for greens fees. He added that plans are in the works to have drive up service at the pro shop in the next week or two where golfers can pay with cash or card, and they will even be able to make equipment purchases without having to enter the building.

“We had a meeting today, and mastered our minds together and we’ll be open tomorrow,” LaBarge said April 19. “We plan to follow along with a lot of things other golf courses are doing — no groups or gatherings and six feet or more between golfers. We’re actually turning the cups upside down so the ball sticks out a little and golfers won’t have to reach in. I think it’s fortunate that golf is a sport where you can pull this off.”

“For the next week, it’s honor system only as we attempt to minimize contact,” he said. “We’re providing envelopes that golfers can drop in a slot.”

He added that hopes are tournaments and leagues will be able to take place this season, but that depends on regulations set by the state as the coronavirus crisis continues to unfold.

LaBarge said along with another worker, he has been “chipping away” on the layout getting it ready for its opening.

“The really good thing is we are fortunate enough to start the season in the best shape we’ve been in many years,” he said. “Some members who have been with us for 40 years and have been out here have said its in the best shape they’ve ever seen it. The course is really in great shape coming out of the winter.”

The Lake Placid Club announced on its Facebook page April 21 that members interested in playing on the three courses should call the Crowne Plaza at 518-523-2556 for tee times. The club house and pro shop are closed. People are not allowed to walk on the courses without registering for tee times.