EYE ON SPORTS: Clock running out on a possible school spring sports season

Lake Placid’s Hunter Wilmot — now a senior — chips onto the 12th green at the Craig Wood Golf Club during the opening day of the Section VII golf championships on May 23, 2019. The team claimed its third straight Section VII title and fourth in five years that day. (News photo — Lou Reuter)

Lake Placid’s Hali Cook (a Keene Central student), left, gets ready to hand off the baton to Maddy Cohen during the 4×100 race at the Section VII championships in Plattsburgh on May 23, 2019. Both were listed as sophomores on last year’s team roster. (News photo — Justin Levine) 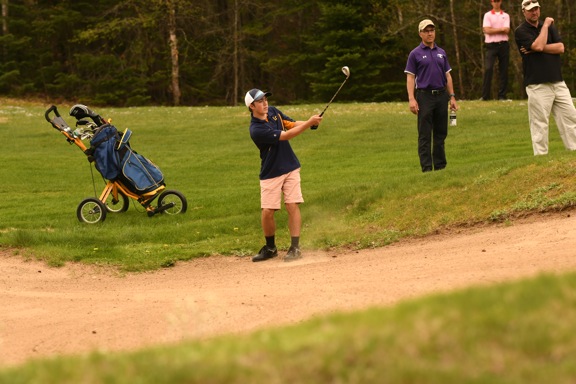 Lake Placid’s Hunter Wilmot — now a senior — chips onto the 12th green at the Craig Wood Golf Club during the opening day of the Section VII golf championships on May 23, 2019. The team claimed its third straight Section VII title and fourth in five years that day. (News photo — Lou Reuter)

LAKE PLACID — Usually at this time of year, John Burdick could probably be seen in the afternoon at a high school baseball game or a track meet.

As the director of athletics, as well a longtime coach for the Lake Placid Central School District, Burdick has been a familiar face at Blue Bombers’ sporting events.

But so far this spring, there are no sports competitions, schools are shut down and classes are commencing online, all due to the coronavirus pandemic.

Officially, there’s still a glimmer of hope that high schools across New York, or in parts of the state, can salvage some type of spring sports season. But that window is starting to narrow. Right now, all schools in the state are closed at least until May 15 as part of Gov. Cuomo’s New York on Pause mandate, and decisions whether to reopen them is still based on a multitude of unknowns. 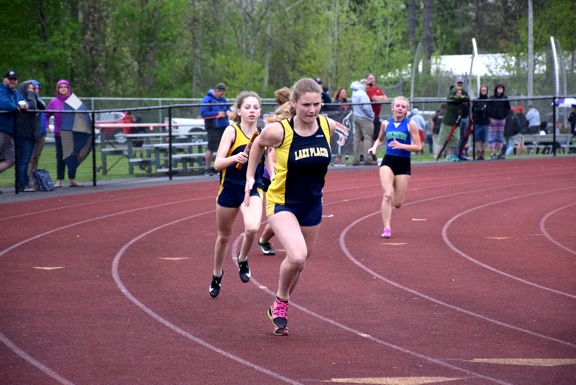 Lake Placid’s Hali Cook (a Keene Central student), left, gets ready to hand off the baton to Maddy Cohen during the 4x100 race at the Section VII championships in Plattsburgh on May 23, 2019. Both were listed as sophomores on last year’s team roster. (News photo — Justin Levine)

He believes holding any type of sports, or even eventually having schools back in session this spring, will be difficult.

“My thoughts are the way Cuomo has spoken in terms of how you might reopen schools, and ensuring the safety of families, I would be extremely surprised if we have either school or sports,” Burdick said Wednesday, April 22. “At this point, we have to wait to see what happens after May 15. Everything is shut down until then, and we don’t know what will happen after that.”

In a just-in-case scenario, athletic directors have been communicating with Matt Walentuk, Section VII’s interscholastic athletics coordinator, about how a possible season might unfold.

“We’re meeting every week,” Burdick said. “As athletic directors, we did a survey to give Matt some ideas going forward. We’re looking at it two ways. Assuming we did go back, first, what would state championships look like? The second piece is what would the regular season look like.

“Part of the conversation has been if the state keeps the schools shut down, athletics are done. And if NYSPHAA essentially says you’re done, you’re done.”

Burdick went on to say if school does reopen right after May 15, sports still probably couldn’t happen at all this spring unless teams and athletes can either start practicing by May 18, or sports programs have a plan in place at that time.

“A big question for sports moving forward is — how do you keep equipment and everything else clean and safe? How do you handle social distancing? If we don’t start on the 18th, I think we’ve reached the cutoff.”

A little more that a week ago, Burdick said shutting down sports in the Tri-Lakes this spring was accompanied by an added blow. Most years, due to a combination of the timing of spring break and winter sticking around late, preseason workouts outdoors are sometimes non-existent before actual competition begins.

“The cruel irony this year is we could have been outside practicing in March,” Burdick said. “Tennis courts were ready, fields were usable, the weather was good.”

If it came down to a last gasp in regard to holding any interscholastic event this spring, Burdick envisioned wishfully, and perhaps thoughtfully, that seeing rivals Lake Placid and Saranac Lake get together would be fun.

“Anything between the two schools would be great, even if it was just to honor the seniors,” he said.

In the meantime, Burdick is keeping busy, whether it’s staying active with walks around Mirror Lake or helping get 190 food deliveries out three times each week to district students.

Although Burdick said he’s been trying to get in at least one walk a day around the lake, this past snowy Wednesday wasn’t one of them.

“I see a lot of our students when I’m walking,” Burdick said. “I feel especially bad for the seniors. I also see former students who are college seniors this spring. I think I feel even worse for them.”