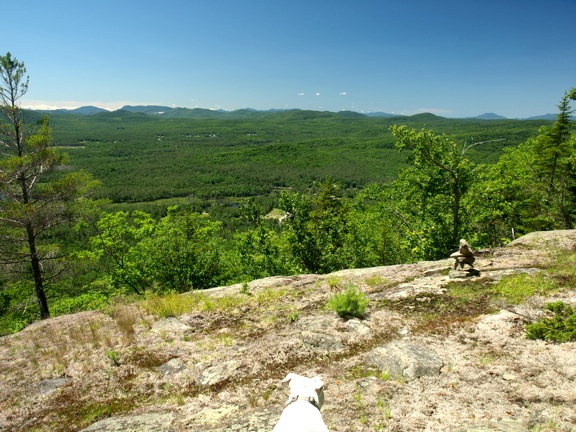 Vanderwhacker Mountain is a pretty popular hike, mainly because it has a fire tower killer views and ease of access, and then there is the Adirondack Fire Tower Challenge list.

However, two gems in the region rarely fall within the sights of hikers. I’m talking about Oliver Hill and Snyder Hill located just east of Irishtown and west of Schroon Lake. They are part of the Vanderwhacker Mountain Wild Forest. A friend of mine reached out a few days prior about checking out these two small summits and, with my inability to say no to a bushwhack adventure, I said yes.

Looking at a topo map, they look to be some real gems, but you really never know until you get there. Tight contour lines gave face to apparent steep terrain which opens up potential for views and plenty of low-lying flat expanses that often give us beaver swamps and unexpected wetlands. It was sure to be an adventure. Estimated at about a 4-mile traverse, we knew we wouldn’t be out all day, but honestly you never can tell.

Meeting in Schroon Lake, we drove over and spotted a car near Irishtown and drove back to start our hike from the north near Oliver Pond. The day was sure to be a nice one (at least that’s what the weather man said, and they never get it wrong). The woods were open, but we quickly started to fight the drenching effects of all the rain we received the night before. The intermittent streams and drainages were flowing like rivers, and sediment was streaming past us at a rapid rate. If it were not for waterproof footwear, we would have been squishing water between our toes within minutes.

This seasonal drainage we were on was actually the perfect route for the path of least resistance, as water also uses that concept. It flowed through a shallow divide of two smaller hills, removing debris from around its edges, making a path through last fall’s leaves, which also makes for a perfect habitat for ferns and other undergrowth. Small fields of maidenhair ferns dotted the landscape. It’s such a rarely seen fern, so it was a treat to see so many in one spot. The stream split into several smaller ones as it cascaded over the small stones and sandy surfaces, but eventually we would be high enough where most of its source would disappear into a field of interrupted and ostrich ferns, as well as several vernal pools heavily habituated by frogs.

Now we would face our first challenge, a huge beaver marsh. We wondered how we would get across this. Looking upstream, we found a narrowing of the water running through. With the help of a couple trekking poles, we made it across dry.

As we crested a small hill, we soon came to another crossing, this one more like a small pond, and we needed to go downstream and find a dam to cross. As we made our way downstream, we came to the realization that we were on an island, which we just circumnavigated back to where we crossed. So back across the outlet we went, downstream to a beaver dam at the base of the small pond. Finally after about 20 minutes of messing around, we were across.

Once across the low-land areas that we so wanted to avoid, we could finally start our climb of Oliver Hill. The terrain wasn’t all that steep as a whole, but certain sections did require more of an effort, especially with the soaked mosses and ground covers. Slowly the forest turned from a mostly hardwood cover to a mixture and then to a mostly spruce and balsam forest. While a bit scratchy with decades of deadfall and standing snags, it wasn’t all that dense, but that didn’t stop me from drawing blood.

A high shelf on the summit gave form to a small high elevation bog, which we avoided to protect its rich green beauty. Pressing on to the summit, which wasn’t all that far away, the forest fed us naturally to the highest point which was fully wooded, and smack dab in the middle of “Spruceville.”

Looking through and beneath the trees, I could see what looked to be a nice opening, maybe a viewing area, I supposed. I went ahead of Alan to scope it out but quickly called back confirming his need to come over. A small ledge opened up a peekaboo view, and upon further exploration I found a better observing platform atop a jumble of boulders that had broken away from the main body of the summit. A positive payoff was awarded to us, and we were happy to accept.

Now we would head toward Snyder, which in all honesty looked to be the better of the two according to our map studies. We had a tough time staying on line to get off the wide ridge, but with a few harsh corrections we managed to get back on course and finally stand below the steeper slopes of Snyder. Only after we fought step ledges, deep creases in rocks, stirred up a nesting bird in the ledge, and enjoyed a quaint little waterfall did Snyder’s ridge show itself as a fantastic sight for sore eyes.

There was hardly a speck of evergreens to thwart our forward progression, and the forest seemed to get more open as we ascended. Fields of ferns to push through was the extent of our torture, and that sure beats a balsam branch in the eye!

As we approached the summit, the open forest looked to have potential views off to our left. I walked around a bit and found nothing, so I made a course right for the summit. We passed beneath a tall ledge, lined at the top and base with a rich green salad mix of ferns and sedge. The summit was wide open but dotted with tall maples, giving us a very welcoming feel, but no views. I again had to follow my instinct and look for a view near the stacked contour lines on the map.

It wasn’t but a couple hundred feet and we were atop a long, wide open ledge that overlooked Irishtown with Moxham Mountain and Gore Mountain shadowing the narrow streets and scattered homesteads below. We remained here eating lunch and taking photos for nearly an hour before we set foot again following the rocky ridge to the west toward our second car.

The descent was steep and arduous on the knees, but it got us down very fast. We followed an old wire fence as it passed through a massive seep in the ground. The seep made the footing slippery beneath us, and the rocks scattered about made it even more unstable, but once we were on a less aggressive course everything cleared up except for the forest.

It was like we were on an inverted mountain. Where most peaks have spruce and evergreens near the summit cone, this was at the base. Massive hemlocks and white pines towered above us as we worked our way through needle carpeted forest.

We passed through the narrow corridor of state land and past the private land, which we somehow managed to nail perfectly; then we were at Irishtown Road, close to where we had parked the car; another successful hike, another adventure in the books and a few more miles of swimming through trees.