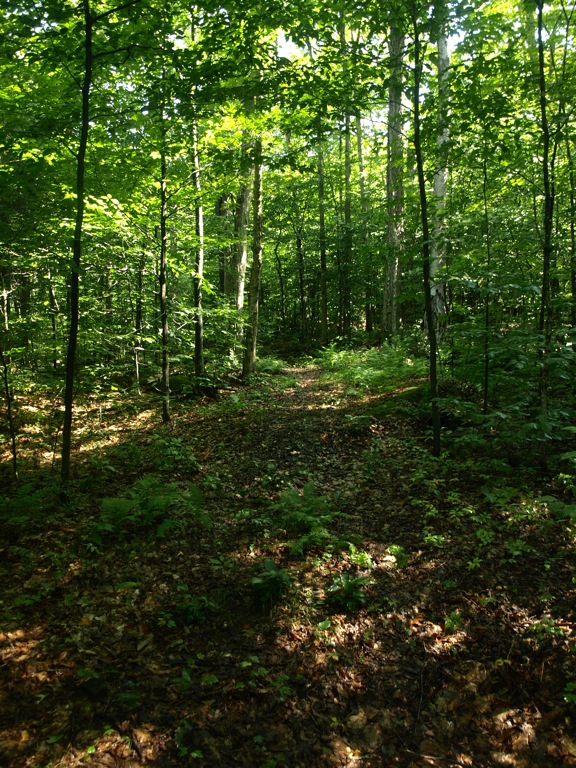 I noticed this trail on my previous visit to the Moose River Plains, and it made me wonder about its destination, and it’s been eating at me in every sense.

The trail was labeled as the “Seventh Lake Mountain Trail,” which I thought odd; I had never seen a reference to a summit trail on this mountain. Marked with a combination of foot trail markers and snowmobile markers, I needed to come back for sure.

Then on an early mid-week day, I set off on my typical drive to Inlet which would bring me past the Eighth Lake State Campground. As I drove by like the wind, I happened to notice something out of the corner of my eye — it appeared to be another trail sign that I had not noticed before. I had to make a quick u-turn to see what that was all about, perhaps my morning coffee had me hallucinating or just jacked up with unvented energy. I was right, and to my surprise there was a trail sign saying Seventh Lake Mountain Trail — just like the one on the other side I saw on that prior trip.

Now I really needed to know what this trail was all about; however, I suspected it was more of a snowmobile trail that didn’t access the true summit but passed by it gaining the name of the closest feature. I busted out my GPS to fire it up and see how far I was from the actual mountain, I had a notion I was still quite far. In a straight line and as suspected, I was nearly 4 miles away, so assuming the trail was not a straight line I can imagine I was closer to 5.5 trail miles away, a longer jaunt in the woods than I could muster up today. I hate having to hike to time crunches.

I drove around to the trailhead that I saw off Moose River Road which I knew was much closer to the summit, and by much closer, I am talking less than a straight-line mile. Assuming the trail meanders about the steep slopes of the mountain, I was thinking about 1.5 trail miles away. I figured there would be some bushwhacking involved to actually summit, so I added a bit more to my estimate.

I nudged my car off the road enough for safe passage by other vehicles, but a second car would have been an issue parked in this immediate area. Luckily, there aren’t too many fools like me that like this kind of exploring.

The trail was wide, an obvious design more for snowmobile traffic than foot traffic, yet it had trail markers for hiking too. It wasn’t long before I realized that there wouldn’t be much foot traffic on the trail, but I could see it as an excellent cross-country ski trail; the only downfall of that is the Moose River Road is closed in winter. Too bad. There are so many trails back in there that would make for some outstanding cross-country skiing.

The trail was an introduction of rolling hills with only a couple steady climbs, nothing too steep for a snowmobile to maneuver. Soon the trail passed by a marshy area to my right where I couldn’t get a decent photo or view, but I could tell it was loaded with some sort of birds due to the racket they were making. Next came a bridge with that new bridge smell (creosote or some other sealant). I could smell it before I could see it, but I guess that does save it from breaking down too fast.

After skirting the base of the mountain for the last half hour I could go no higher on the trail, it was dropping in elevation before me; I must climb. I took an abrupt left-hand turn without even thinking about it and started my climb up the remaining 0.3 miles and 200 feet of the mountain. It was nice though that the trail brought me up to over 2600′ in a very mellow fashion, now I had to work a bit.

Almost immediately I hit a small cliff which was easy enough to skirt so I did this to the right for no other reason than it looked like the shortest route to the top. The forest was not as open as I am used to in the Moose River Plains, but nothing horrible in the grand scheme of things. I had to move about a bit more to avoid the scratchy spruce and a few small patches of dead-fall. The summit came swiftly, at least the summit cone. It was very hard to find the exact summit but I think I was successful in the end. The final contour, as I call it, was wide and quite massive with many small bumps of fewer than five feet of elevation prominence, I hit them all I think, but again which was the exact top? It was hard to tell. Not only that, they all looked the same, in fact I think a couple of them were the same.

A short break with the black capped chickadee population, and a turkey vulture that I think found me as possible dinner, sorry to disappoint. I was soon off. I made a heading a bit further to the west to aim for the steep slopes in hopes of gaining a view. Unfortunately, no views were awarded to me on this day, but it was a pleasure to explore this rarely touched piece of the Moose River Plains, as well as check out a new trail. Now it was time to motor home and plan for another day in the Plains, which I had a good notion would be Indian Lake Mountain and Mount Tom, but I guess you will have to check back to see if that was the case.