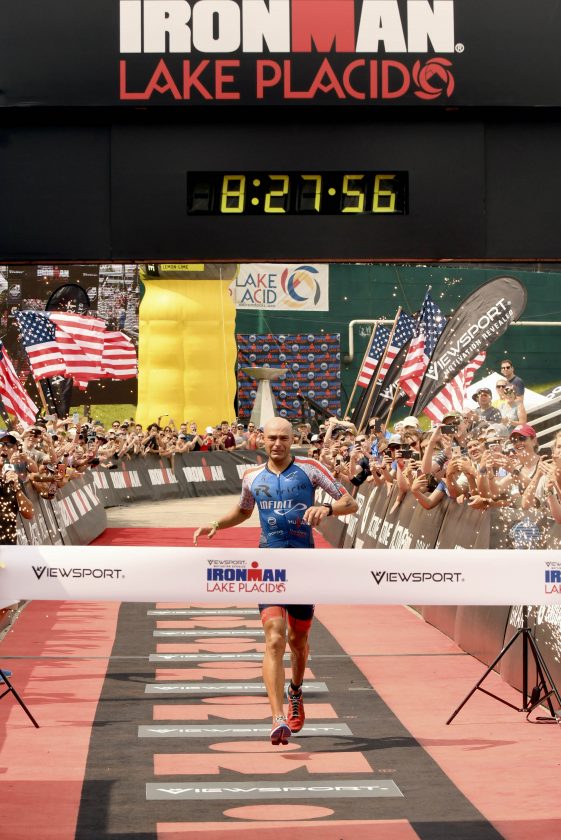 Matt Russell, who grew up in the North Country town of Lisbon, closes in on the finish to win men’s professional title in last year’s Ironman Lake Placid triathlon on July, 28. The event draws more than 2,000 competitors here each summer. (News photo — Lou Reuter)

Held every summer since 1999, the Lake Placid race is the longest running Ironman 140.6-mile distance event in North America, outside of the World Championships in Hawaii. Lake Placid also added a September Ironman 70.3 race to its annual slate in 2018. They are among hundreds of endurance races around the globe operated by the Ironman Group, which is headquartered in Tampa, Florida and led by CEO Andrew Messick.

Wanda Sports Group, the Beijing, China-based investment company that owned the Ironman Group, has sold that business, and it’s coming back to American soil. On March 26, the deal was finalized as Advance purchased the Ironman Group for an announced price tag of $730 million.

“I think it’s a great thing,” said Greg Borzilleri, race director of the Lake Placid Ironman races. “It’s always nice to bring things back to the U.S. The sale won’t affect anything on our end. We’ve had a couple calls from the central office in Tampa, and everything is going to stay as it is.”

The 2020 Ironman Lake Placid is currently scheduled to take place on Sunday, July 26, with the Ironman 70.3 Lake Placid slated for Sunday, Sept. 13.

Advance, Ironman’s new owner, is a family-run company based in New York City with its roots in the media industry. The company started in 1922 when members of the Newhouse family purchased the Staten Island Advance newspaper. In its 98 years of existence, Advance — which is still controlled by the Newhouse family — grew into a world wide mass media empire that currently owns newspapers, magazines and has expanded into, entertainment, digital technology and now the growing world of endurance sports.

“It’s an asset we have admired for a long time and we feel very lucky that it became actionable in this environment,” said Advance Chief Strategy and Development Officer Janine Shelffo. “We believe experiential assets, including mass participation sports, are very attractive long term businesses. Participation rates in endurance sports are growing all around the world and Ironman has a very global business. It’s also a powerful brand with passionate and deeply engaged followers. For all of those reasons we are very excited about the acquisition.

“We first met with Andrew Messick over a year ago,” Shelffo continued. “We didn’t necessarily expect that Ironman would become an actionable asset but we kept an ongoing dialogue. When Wanda decided to sell the business late last year, we were happy to be there to continue the conversation.”

Print publications owned by the company include magazines such as The New Yorker and Vogue, and newspapers such as the Plain Dealer in Cleveland, Ohio, and the Oregonian of Portland, Oregon. The company’s holdings also include Advance Media New York, which publishes Syracuse’s newspaper, the Post-Standard, and websites syracuse.com and newyorkupstate.com.

The purchase of the Ironman Group was part of Advance’s diversification plan as the company looks for more methods of generating revenue that don’t rely on advertising dollars. Last spring, a Wall Street Journal report originally stated that Advance Publications Inc. was investing $10 billion outside of its media business for ownership or interests in other fields that include entertainment, software and space.

A year ago, Advance co-President Steve Newhouse may have shown some foresight into the current situation facing media businesses that rely heavily on advertising revenue, which has recently shrunk as businesses contract during the coronavirus outbreak.

“We’ve seen how disruption affects traditional media and the challenges that result,” he told the Wall Street Journal. “We’re looking to diversify into different areas not as exposed to the vagaries of the advertising market.”

The Ironman Group currently runs more than 235 events in more that 55 countries around the world, according to its Ironman.com website. In addition to operating Ironman and Ironman 70.3 triathlons, other endurance events it runs include the Rock ‘n’ Roll Marathon series, Ironkids races and the Epic Mountain Bike Series.