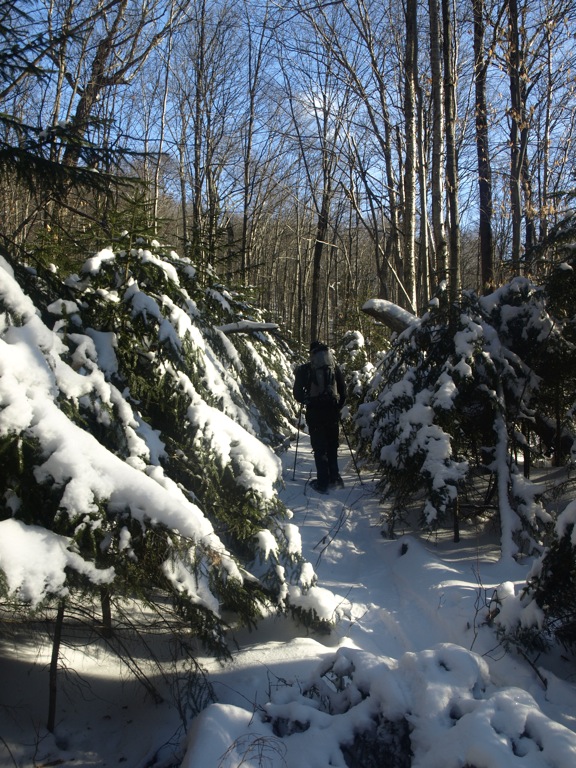 It’s hard to believe it was just a few days ago that spring hit the north-country. Well you wouldn’t know it; we had just had a fresh snowfall and seemed we were back into January again.

Even though the snowpack still wasn’t all that deep, the solid crust we had made adventurous travels through the forest a breeze. Snowshoe floatation is what I was looking for, in fact a guy my size thinks of nothing more. I met up with friends Mike and Brandon at the Meacham Lake State Campground for this little adventure into the wilds of Franklin County, now we had to see what we could find.

We were all prepared to walk the roads through the campground since it was the off-season and the campground was closed. Upon arrival, we were right. The road was only about a mile long back to the boat launch where we were to start out wanderings.

Brandon mentioned that there was an old trail up on the shoulder of the mountains that he saw on his GPS, and the trail used to go into the shallow pass near the peaks. I wasn’t too optimistic because most old trails or roads on topo maps are all pretty much completely taken over by nature, but we worked our way that way anyhow. We began by snowshoeing along a herd path that followed the Shore of Meacham Lake, and then realized this wasn’t doing us any good so we started direct uphill for Black Peak.

While heading to Black Peak we started to get closer and closer to the old trail Brandon mentioned. If it did exist in any decent state of being we would surely see it. Suddenly, there it was, an unmarked trail that was definitely there, and defiantly easy enough to follow, so we did. 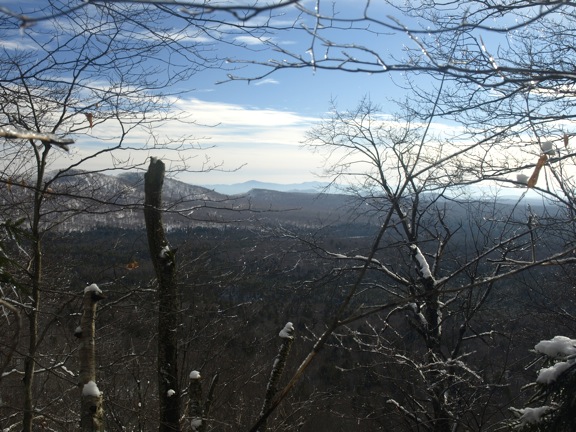 Even with a few honkin’ trees down over the trail it was very easy to walk and follow. Other sections were lined on both sides with red spruce, a telltale sign of an old road or trail. As we progressed through our new territory we started to realize that we were getting further from Black Peak and closer to East Mountain, so we changed our plans and pointed off toward East instead.

The old logging road soon ceased to exist in any form that benefitted our travels, so with collective hearts we started to bushwhack up the face of East Mountain, all 0.4-miles that were left of it. Sure, we were close, but I think a small part of each of us wished the old road kept going. It was clear that what we were walking through at this point, in the flats of the region, was a frozen seep, and frozen is the key, as none of us wanted to punch through into 6-inches of much and mire.

Once at the base we started our initial ascent on the peak, and it was a steep one. I think we must have chosen the steepest line on the mountain; we just had to dig in and climb. We avoided small cliffy areas by meandering about, and eventually through, some somewhat thick spruce growth and eventually we stood atop the summit with its screened views before us.

We had hiked up the west side of the mountain, which was pretty much clear of snow on the trees. The north side was visibly not the case as seen from where we were standing; it was a beautiful veil of white.

A few sips on some warm tea got me primed to go. We descended a bit of an altered route, one that was equally steep. We hoped to find better views on the way down but had no luck there either. We quickly met up with our tracks and used those to get back down to the land bridge between East and Black.

In the valley and on the north side of Black Peak we too came into the snowy forest we saw from up high on East Mountain. It was a spectacular vision as the sun broke through the clouds and lit up the area like a beacon. We had very little to climb to reach the summit of Black, but it took much longer due to the fact that pictures were being captured continuously.

The summit of Black did come down to meet us, and with a decent view of Moose and McKenzie mountains to boot. We could even see the very tip of Whiteface through a high valley of the Sable Mountains.

It was now time to head out, and we did so without hesitation. As we descended the northwest face we remained in the scenic snow for quite some time. The beauty outweighed the cold of the snow coating our necks, that was only fuel for the fire to get out to a hot coffee.

Moose have always been a frequent part of the region and soon they would show us their eating habits. I was aware that moose enjoyed bark as part of their daily intake of fiber, and the local striped maples found out the hard way. The moose use their lower teeth to get under the bark layer and then rip it high up the tree. At first it might appear to be an antler rub, but at a closer look, it is surely peeled back.

We made a direct heading back to the old logging road, which came upon us rather quickly, faster than it felt at the time. Once we stood on it again we moved along much faster and would have a much shorter day than we anticipated, thankful to this trail. We decided to follow it all the way back to the campground to see where it would kick us out, and come to find out it was just back up the road from where we started in. How did we miss it?

Later doing a bit of research on the old road, come to find out, it was an old ski trail of sorts and locals over the years have tried to keep it open. Apparently, depending on the year, it can actually be in quite good condition and free of downed trees. Might have to return one day for a some ski recon. 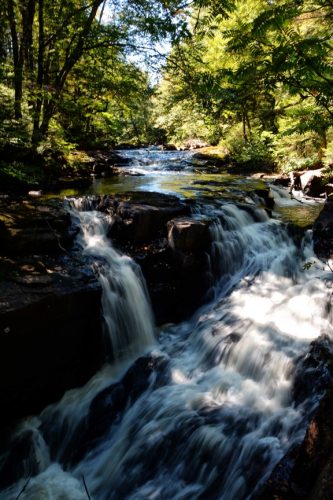 What do you miss most during your isolation? What are you doing differently now? What is something positive ... 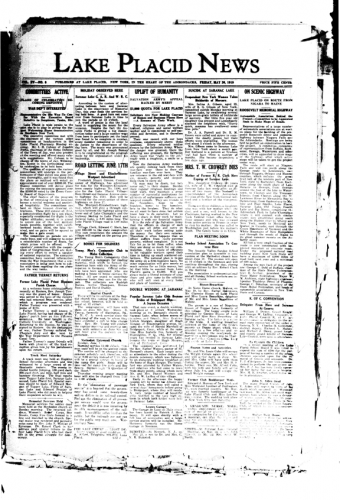 HISTORY IS COOL: 101 years ago 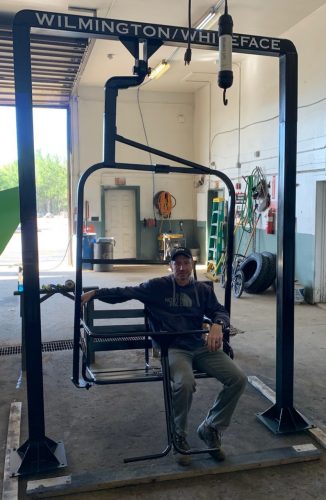 OUR ANIMALS, OURSELVES: To be, or not to be, that is the question … for animals on Earth

“There’s something happening here.” The biological annihilation of wildlife in recent decades suggests a ...

MARTHA SEZ: ‘My heart was pounding, but the wasp never looked back’

Trying to write—or trying to concentrate on anything, really—while, within earshot, a wasp is repeatedly ...